The True Value of Mangroves

Mangroves are a key ecosystem whose value has been underestimated. They store massive amounts of carbon over extended periods of time, with a unique sequestration system. We are destroying them to make way for urban expansion, aquaculture and industrial activity, but the profits these will generate are insignificant compared to the cost of losing mangroves.

Mangroves provide numerous important ecosystem services. Their role as efficient coastal defense systems is perhaps most visually evident, often saving properties and lives from the destructive force of tropical storms. Less apparent is the important part they play in slowing the pace of climate change. Our planet’s great terrestrial forests are well known as carbon sinks but mangroves, through sediment burial, mineralization and organic export, are hugely influential constituents of oceanic carbon biochemistry.

Mangroves are unique ecosystems that prefer sheltered upper intertidal areas of estuaries, bounded by the salinity and inundation of marine conditions and the dryness of the terrestrial environment. Freshwater brought by river systems is frequently flushed by marine water. It is this combination that provides the foundations for a highly biodiverse environment. They are most frequently found in tropical and subtropical regions and, along with other coastal wetland ecosystems (salt marshes and seagrass), mangroves are an important constituent of the blue carbon sink. 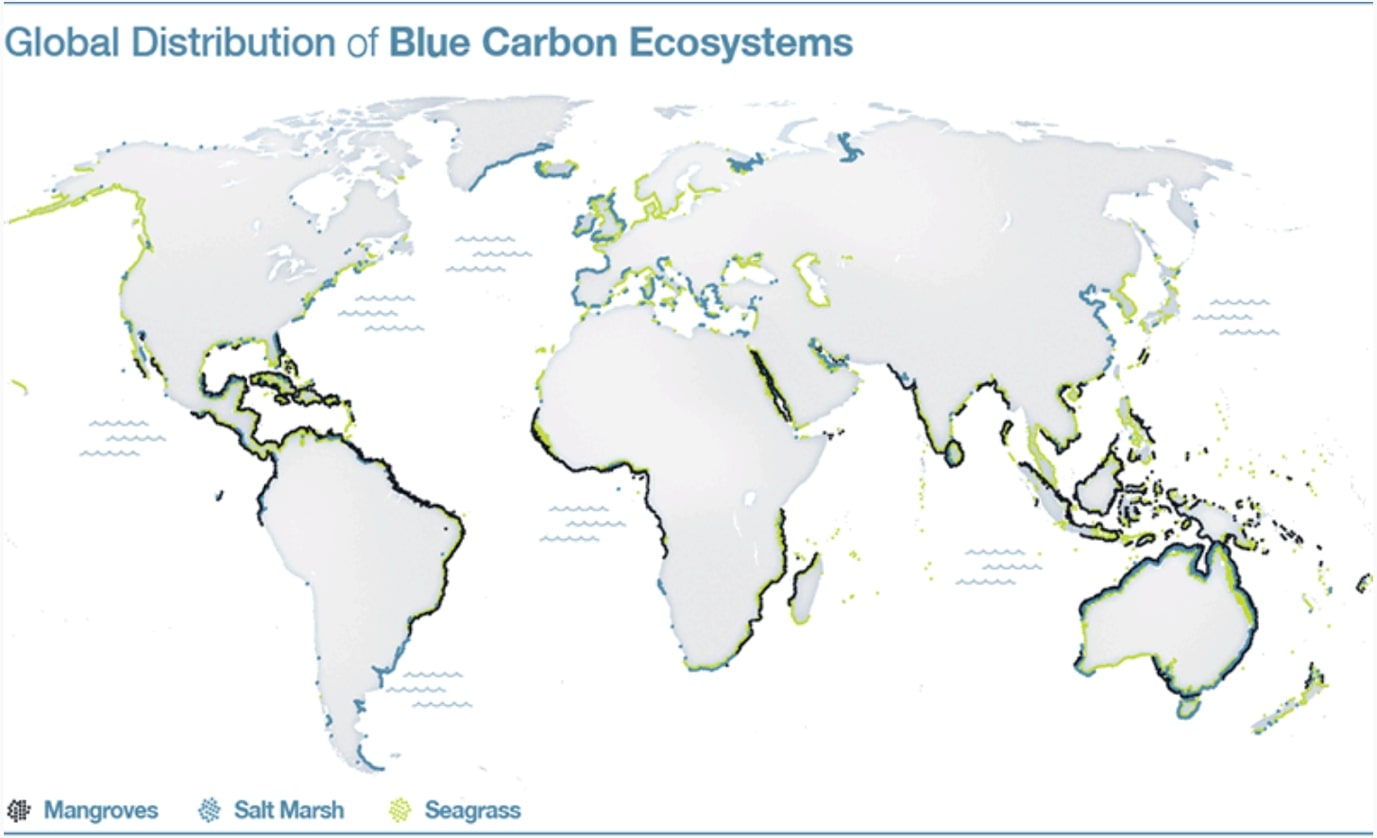 As with terrestrial forests, mangroves absorb carbon dioxide through photosynthesis. As organic matter sinks to the sea floor, the carbon contained within is stored in sediment. Eventually, the carbon is slowly released through the decomposition process. Increasingly, however, mangrove destruction causes mass carbon release. 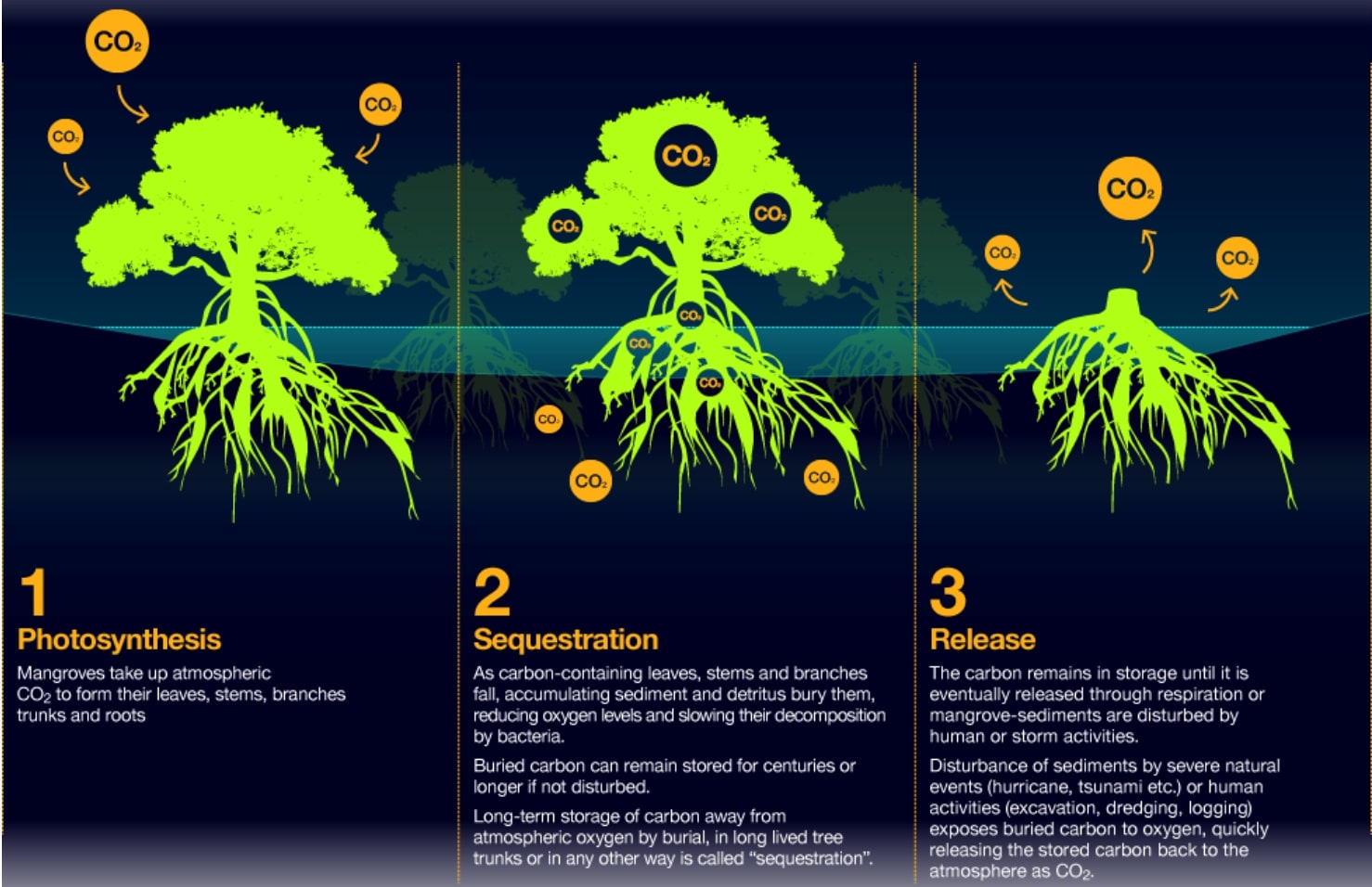 By some estimates, mangroves have the greatest sequestration rate; that is, they can absorb and store far more carbon than that of terrestrial forests. They are thus more efficient at providing this vital ecosystem service. 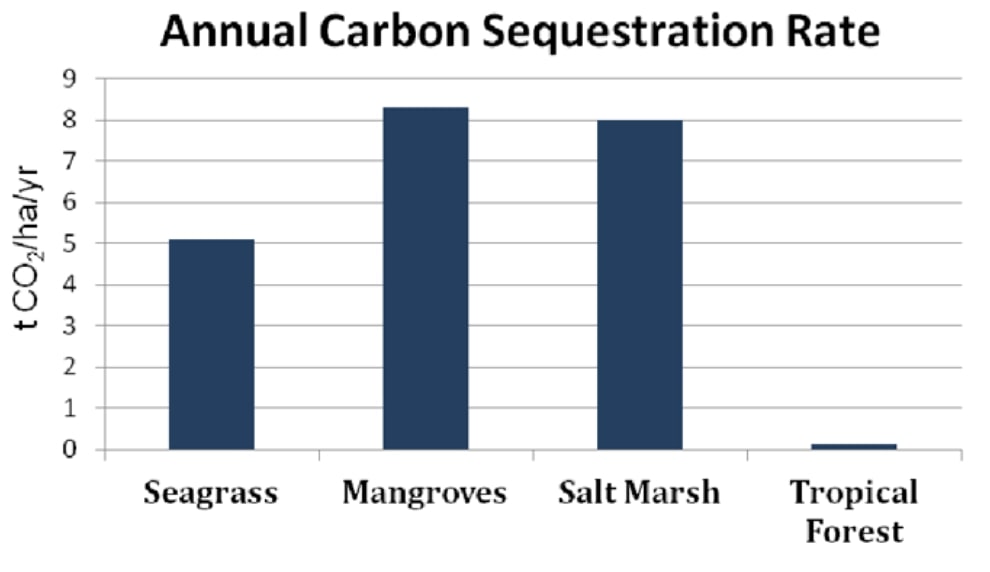 The key difference between mangroves and tropical forests is how the former stores carbon. Rather than being above the surface, stored in the trees, it is piled onto the ocean floor. This underground accretion is a reaction to rising sea levels (the mangroves need to create higher ground, or move inland, in order to maintain a healthy ecosystem), which itself causes further sea level rises, creating a circular relationship. This process creates an efficient carbon sink for a number of reasons. Firstly, the accreted matter has limited access to oxygen and thus decomposes under anaerobic conditions: a slow process that allows carbon to be stored for hundreds of thousands of years. Secondly, underground accretion prevents the mangrove from becoming carbon saturated, meaning it can continue to grow as a carbon sink overtime. Finally, due to the salt content in marine water, blue carbon systems produce less methane, itself a harmful greenhouse gas. 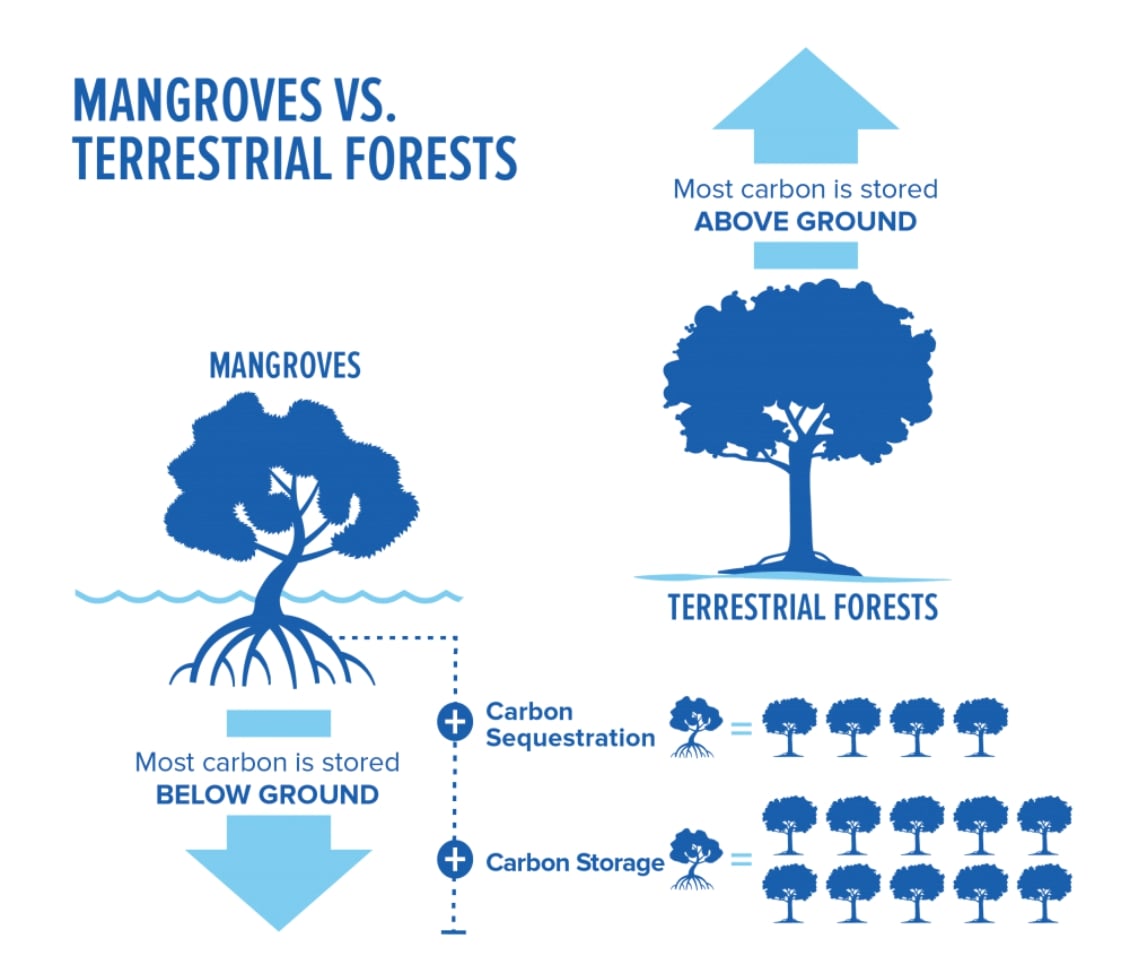 Covering a much smaller land mass than terrestrial forests, blue carbon ecosystems are understandably not as visible, perhaps explaining a previous lack of understanding of their importance. For mangroves specifically, some believe that the carbon absorption rate has been underestimated by 50% (Bouillon et al., 2008). As a result, they have been extensively destroyed, typically through urban expansion, industrial activity, aquaculture and rice and palm oil farming (Smithsonian, 2018). The blue carbon initiative estimates that the rate of mangrove loss per year is 2%. Furthermore, despite only covering 0.7% of the world’s land, mangrove deforestation accounts for up to 10% of emissions from global deforestation. When not causing destruction directly, coastal developments prevent mangroves from migrating inland while they face rapidly rising sea levels caused by climate change. Mangroves are therefore in effect becoming trapped in ever-shrinking habitats.

Recent studies have also highlighted the economic value of mangroves to countries as they try to meet emission reduction targets (PEW, 2020). As such, there is an increasing recognition of the role mangroves have as carbon sinks. Many nations have established protected areas to prevent further mangrove destruction. This is, however, highly variable in effectiveness across different countries (UNEP-WCMC, 2014). 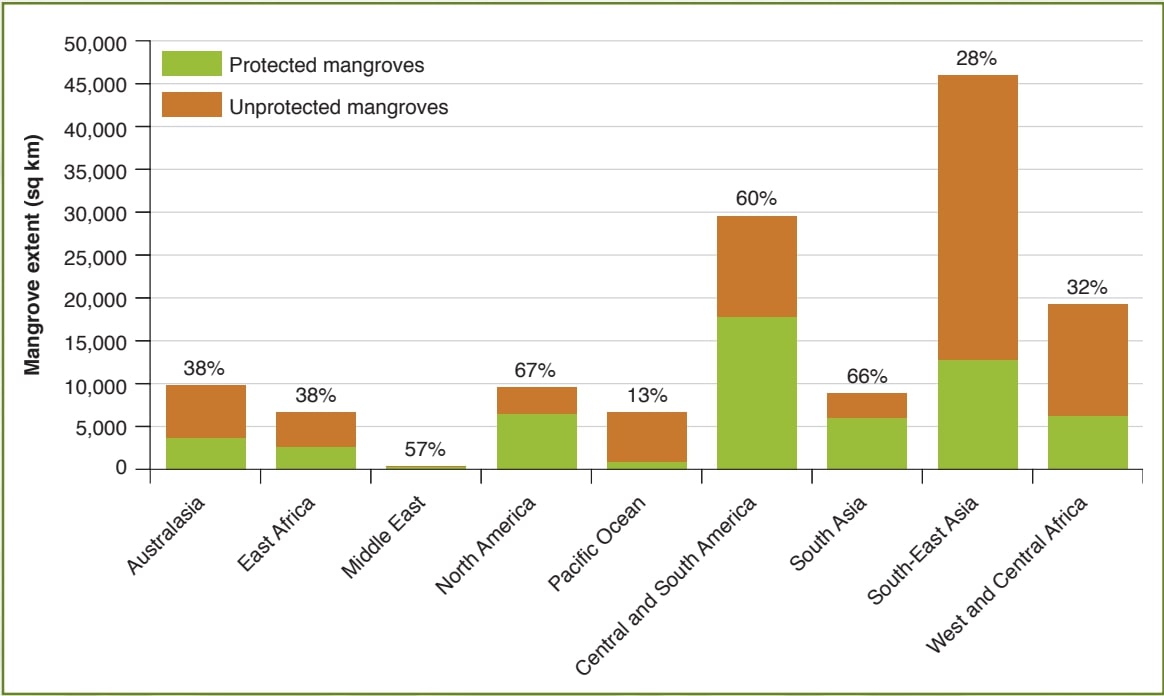 The proportion of remaining mangroves protected in different regions. The percentage of mangroves within protected areas is shown above each bar. Source: (UNEP-WCMC, 2014).

The value of mangroves is now well established. It is essential for the world to catch up and implement adequate protective measures.