In the U.S., toxic Superfund sites are locations contaminated with hazardous chemicals, often as a result of industrial activity. They are identified and barricaded for people’s safety, but many of them are dangerously close to agglomerations. Further, hundreds are exposed to natural disasters, notably wildfires and floods, and the likelihood of chemical dispersion via these events is increasing with climate change.

Founded in 1980, the Superfund program is administered by the U.S. Environmental Protection Agency (EPA), and its purpose is to identify, analyze, clean up and contain sites contaminated with hazardous waste. Its creation was spurred by the 1970s Love Canal disaster near Niagara Falls, where decades of toxic chemical dumping ended up harming hundreds of locals. Below are some quick statistics on the benefits of the cleanup program.

Out of a total 40,000 spread across the country, around 1,500 are on the National Priorities List due to the immediate threat they pose to human health. This is corroborated by the statistics in the figure above; the health benefits from a cleanup portray the danger of these sites.

The remedial system relies on identifying the culprits and compelling them to fund a cleanup effort. When this is not possible, the undertaking is financed by the Superfund, after which the EPA seeks to recover the taxpayer’s money through legal means. Unfortunately, despite having so many high-priority sites to take care of, the number of cleanups per year is dropping. In 2019, the Trump administration completed the fewest cleanups since 1986, for a total of six. Out of 1500. Many are stalled for lack of funds, and today’s backlog is the largest since the program began.

This puts communities at risk of contact with dangerous chemicals for years more than they should be, but beyond this, climate change is going to make things worse. The Union of Concerned Scientists (UCS) released a report this year describing the dangers climate change could pose to chemical waste containment.

Mapping U.S. toxic Superfund sites and their vulnerability to natural disasters in the next century under high emissions. Flood: risk of being submerged by mild to extreme flooding. SLR: risk of being submerged by sea level rise only. SLOSH: Sea, lake and overland surges from hurricanes. Wildfire: risk of release of volatile chemicals from fire on site. Source: U.S. Government Accountability Office, adapted by Earth.Org (mapped by Ka Kiu Fung).

Flooding and storm surges, both expected to worsen with sea level rise, could spread Superfund contaminants beyond site limits. According to the report, over 1,000 sites would be at risk of extreme coastal flooding by 2100 under high emissions; low emissions would still put 800 at risk of flooding within the next 20 years. 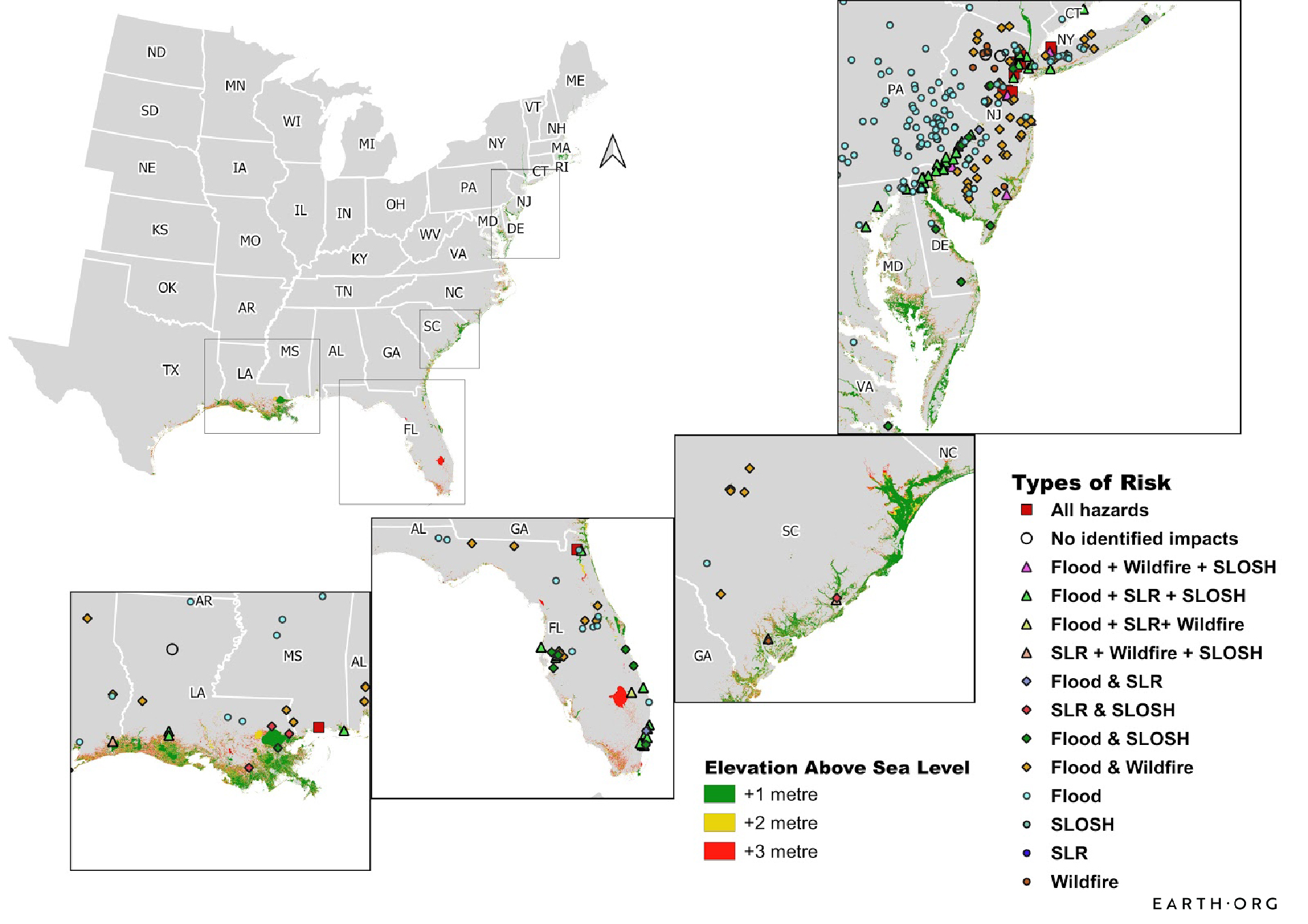 The areas of New Orleans, Florida and New York City are extremely vulnerable to sea level rise, and they also happen to have the highest concentrations of Superfund site (although New York far exceeds the other two in this category). 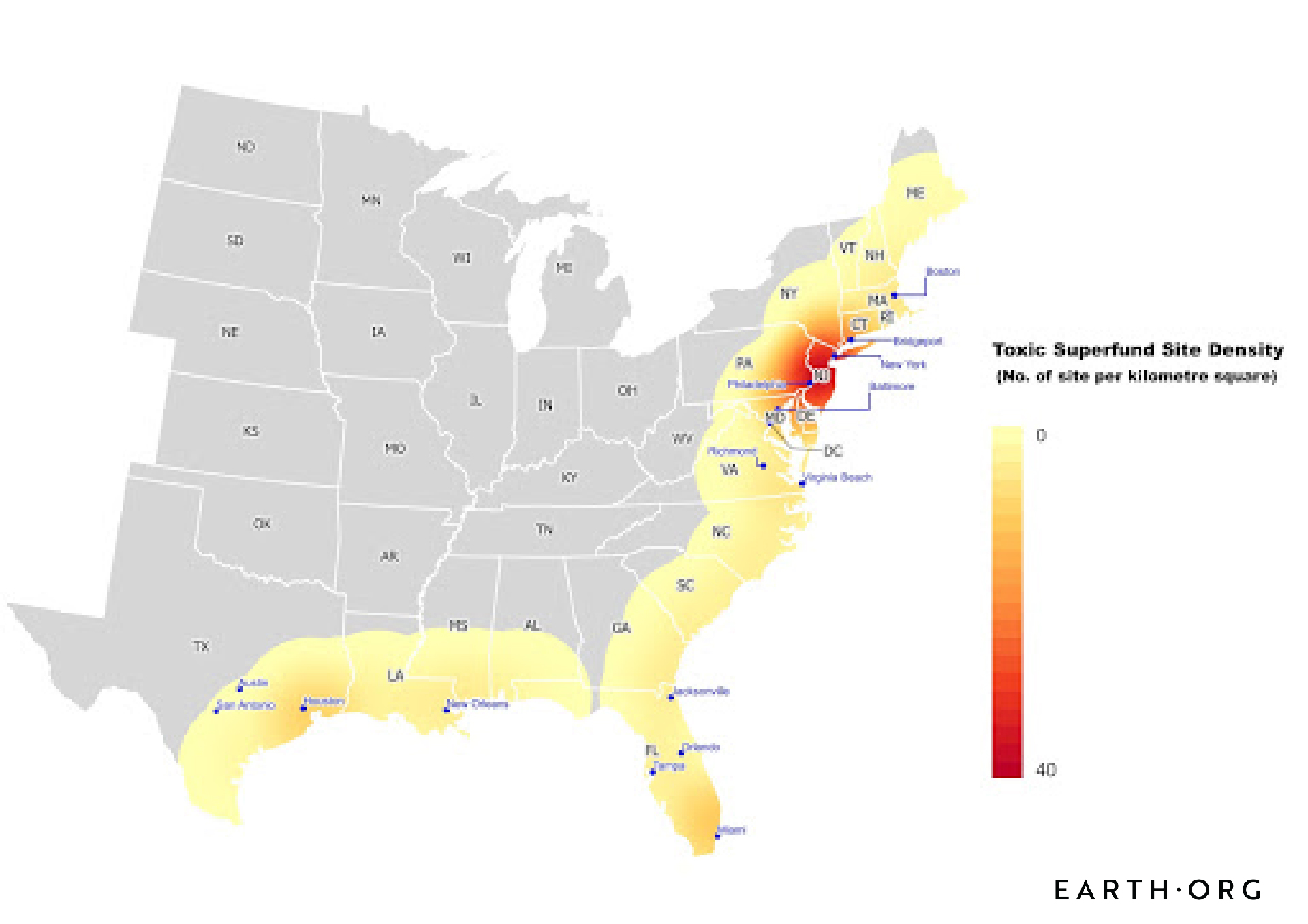 Not only is the risk increasing with every ton of carbon we spout into the atmosphere, but social inequality rears its face in this issue too. Researchers found that communities of color and low income were disproportionately affected by Superfund proximity and risk, and unsurprisingly, the areas in question were found to have higher incidences of cancer.

The solution would entail identification or the most vulnerable areas, and fortification of the site containment. However, in light of the recent Superfund program’s track record and the current administration’s stance on climate change, this seems unlikely. Trump has infamously ignored scientific facts and advice throughout the COVID-19 epidemic, and he treats climate change with the same skepticism. In fact, the UCS decries the dismissal of grant proposals for the simple mention of “the double c word”. This growing phobia of our best understanding of the world we live in is unfounded, dangerous and creeping into the highest ranks of our decision-making. Whether you are a die-hard eco-warrior, a legislator or simply a worried citizen, we must all come together to protect scientific facts and truths for the are our best chance to overcome the challenges ahead.