What Goes Around Comes Around: The Plastic Cycle

How to tackle the marine litter issue, especially plastic waste, has become a trending topic among environmentalists as well as the general public in recent years. Gut-wrenching images of marine life’s struggles with plastic pollution have become widespread on social media. The fact is that plastic’s nefarious effects could stretch far beyond our gentle sea turtles and cuddly seals.

Plastic pollution can be found every part on Earth, on land or in the ocean. Pieces of all sizes are dispersed by wind and surface currents to the furthest reaches of our waters. According to a study by Eriksen in 2014, an estimated 5 billion pieces of plastic, both large and small, are floating in the world’s ocean (and this doesn’t account for the fragments that sink). The majority of surface litter is microplastic (under 5mm diameter), accounting for 35,540 tons out of the total 268,000 metric tons.

The material has become ubiquitous both in our society and in nature. From the images below, we can see the relative density of microplastic across the world’s oceans; the North Pacific Ocean and Indian Ocean contain the highest concentrations. Plastic waste can also be found in high density along the coastal areas, where sealife is the most abundant, of all the continents. 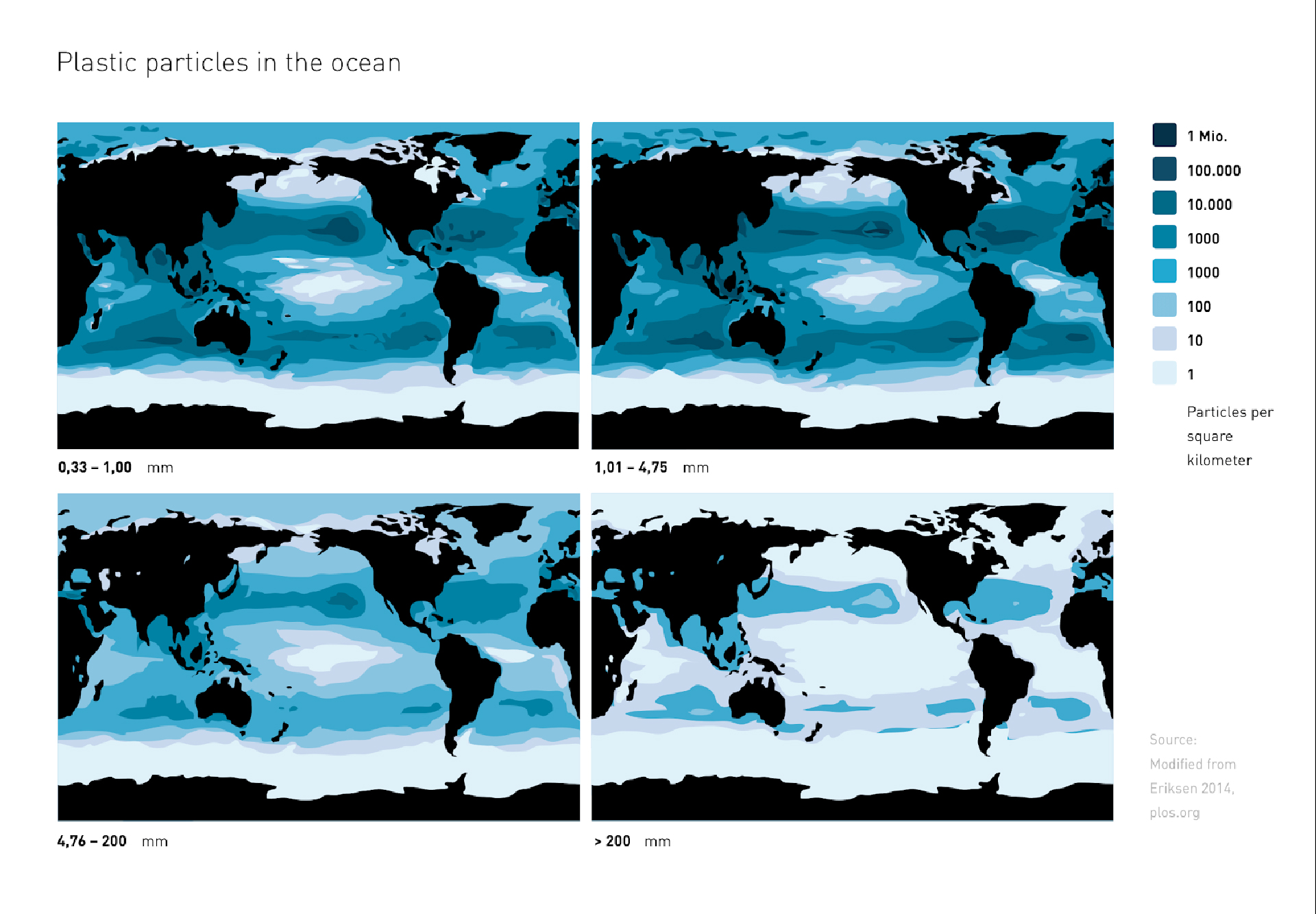 Apart from the typical straws and bags, other types of harmful waste include cigarette filters, food packaging, caps, lids, bottles and even smaller fragments called nanoplastics. The list of victims goes from larger animals such as whales, seals and dolphins down to the micro level like single cell algae and zooplanktons. 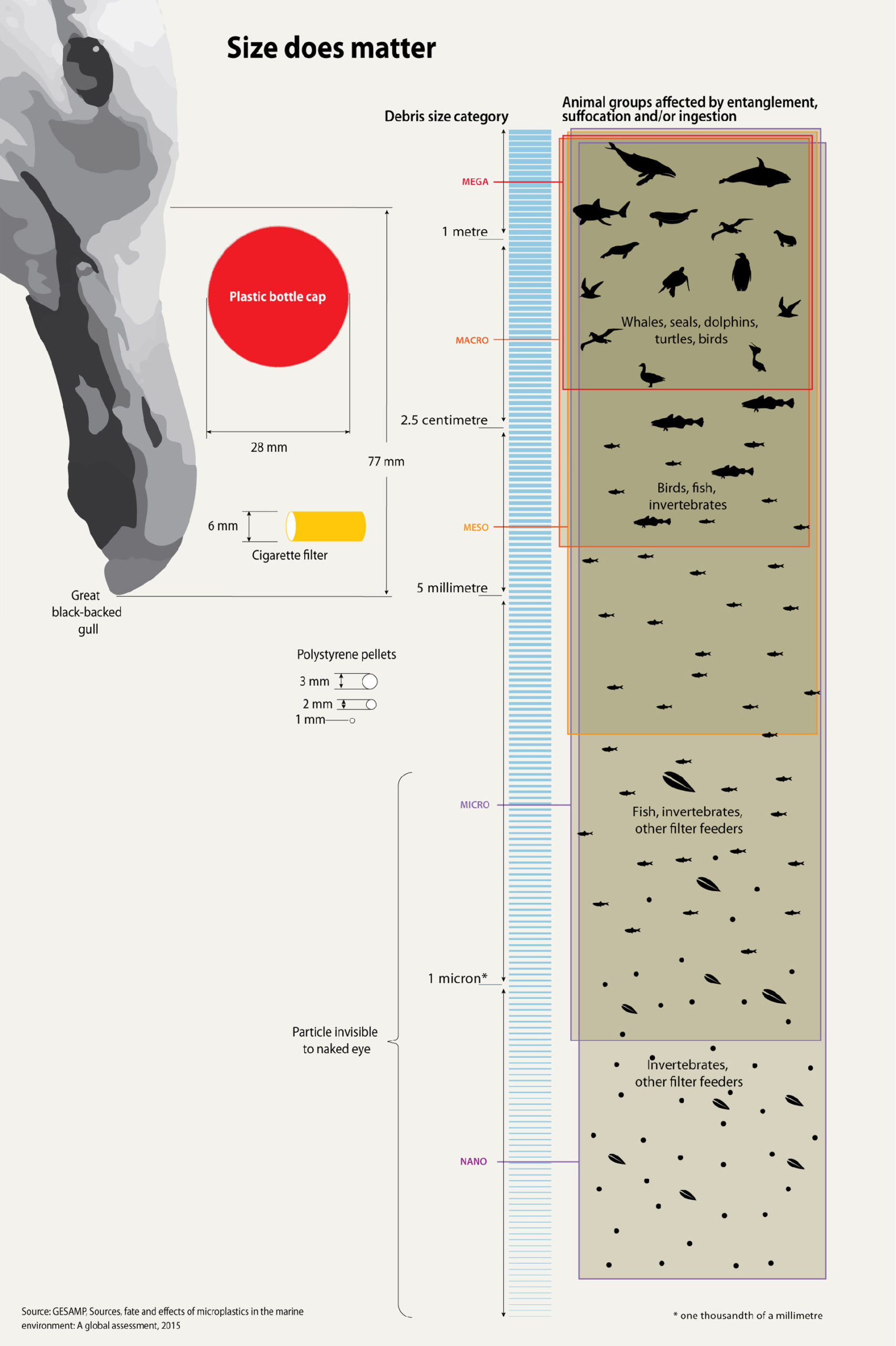 The two main plastic-borne issues for marine life are entanglement and bioaccumulation (or ingestion). The two graphs below show the accumulated impacts of plastic pollution on various animal groups between 1997 and 2015. The number of species known to have been affected by either entanglement or ingestion of plastic debris has gone from 267 to 557 species since 1997. For sea turtles the number of affected species increased from 86 to 100 % (now 7 of 7), for marine mammals from 43 to 66 % (now 81 of 123) and for seabirds from 44 to 50 % of species (now 203 of 406). Entanglement can cause a quick or a slow death through drowning, starvation, strangulation or cuts and injury that cause infection. More than 30,000 cases of entanglement (in 243 species) have been reported in a study in 2015. Bear in mind that these are the cases we know of, and there is likely to be many more. Because the entangling objects usually originate from discarded fishing equipment,  the phenomenon has been dubbed “ghost fishing”. Besides the more common victims like sea turtles and dolphins, it also affects sea birds, marine invertebrates and large fish. Ingestion is less visible than entanglement, however, its effects may be more profound and outreaching. Apart from causing mortality from direct ingestion, through blockage in the digestive system, ingestion also affects individual fitness as plastics absorb other toxins they encounter in the ocean. Fish eating fish move the toxin-imbued plastic up the food-chain, resulting in worse effects in larger predators. We happen to be at the top of all food chains, so aside from poisoning wildlife, we are also poisoning ourselves.

Marine animals such as fish and shellfish are important food sources for humans, around 3 billion people rely on wild and farmed seafood as a primary source of protein. A study from UC Davis back in 2015 found that 1 in 4 fish sold at markets contained human-made debris, plastic or fibrous material, in their guts. The chemicals attached can be carcinogenic and also negatively influence the immune system.

As a final point, overfishing is putting serious strain on our ocean’s fish populations. It has been estimated that 33.1% of the global fish stocks are threatened by overfishing; the percentage of fish harvested at an unsustainable level increased from 10% in 1974 to 33% in 2015. If humans don’t stop exhausting and polluting the ocean, we may end up having more plastic than fish in the ocean by 2050.