What is Climate Change?

We’ve been hearing about climate change more than ever in the past two decades, but the science often remains murky, and headlines become more difficult to trust by the day. Here, we outline in simple terms what climate change is, and what you can expect for the future.

First, simply put, climate is the long-term pattern of weather in a particular area. There can be many day-to-day, week-to-week, month-to-month and even yearly changes, so the climate is derived from at least 30 years of observation according to the National Geographic Society.

Climate change is the long-term change in the observed patterns, meaning variations go beyond those previously observed.

When we use the word climate change, we actually refer to two things: global warming driven by human greenhouse gas emissions and the resulting knock-on effects. These are myriad and still difficult to predict, but some include increased drought and flooding, sea level rise, intolerable heat waves and many more.

The largest driver of global warming is the emission of gases that trap heat in what is called the greenhouse effect, hence the term greenhouse gas. 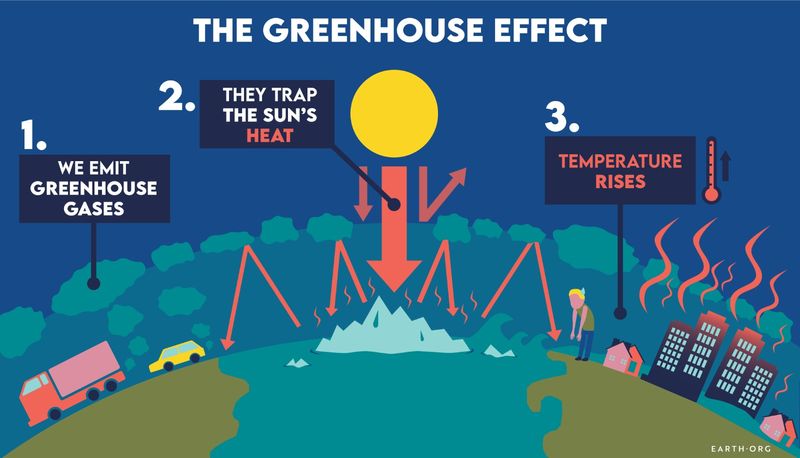 These emissions come from both natural sources (e.g. decomposition or volcanoes), and human sources (mainly fossil fuel combustion). We’ve ramped up our use of coal, oil and more recently natural gas over the last 2 centuries to meet our rocketing energy requirements. While we now have cleaner energy alternatives than we used to, global emissions remain at an all-time high.

The International Panel on Climate Change (IPCC), the “United Nations body for assessing the science related to climate change”, released its latest report this year, stating that humans have unequivocally warmed the atmosphere, ocean and land. 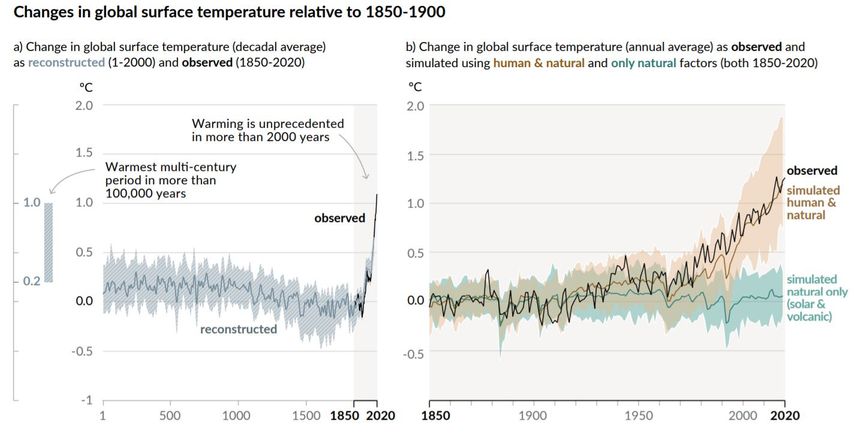 In the figure above, we see to the left in panel a) the reconstructed average global temperature over the past 2000 years. Temperatures today put us at the hottest time in over 100,000 years. To the right, we see two simulations of future temperature: one with only natural causes (in green) and one with human causes included (brown). The latter matches real-world observations (black line) nearly perfectly.

Of course, scientific evidence does not take us past denial, as demonstrated by the reticence toward wearing masks or taking vaccines throughout COVID-19. However, it does provide powerful arguments for policy-makers and lawsuits pushing for change.

The Current State of Climate Change

So far, the world has warmed by an average 1.1C compared to pre-industrial times. This can often be misleading because it may not seem like much, but it is actually a lot.

We need to think about extremes, as in temperatures, and weather events that are unlikely, and often dangerous. 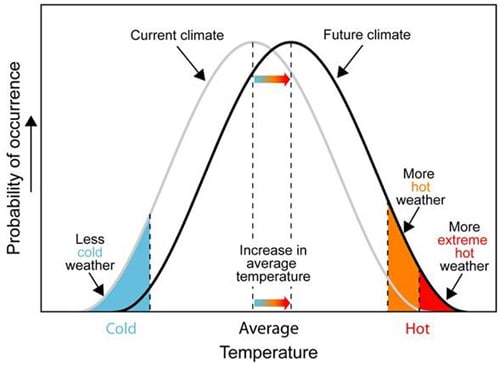 A small increase in average temperatures can mean that what used to be extreme heat can become more of a summer norm, while the new extremes hit harder than ever before.

To illustrate how impactful high temperatures can be, here is an interesting piece of data provided by The Lancet. 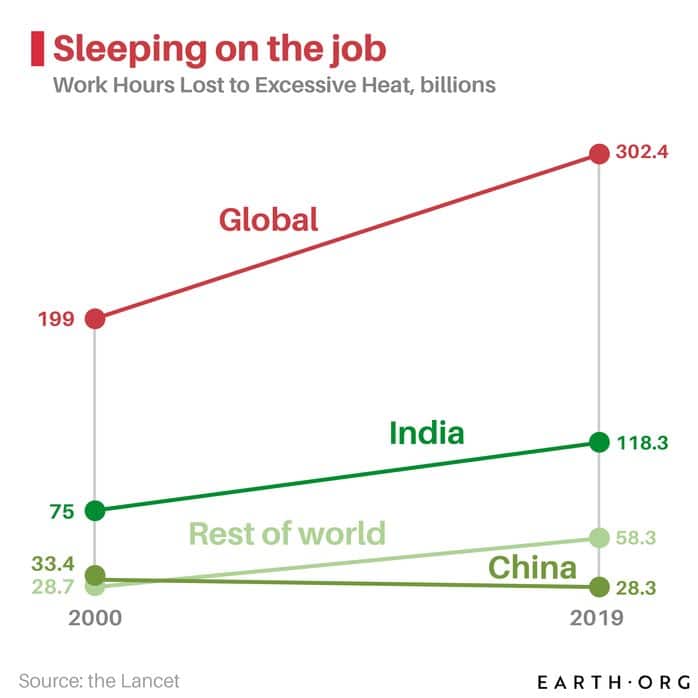 Another huge consequence of climate change is the change in rain patterns. The atmosphere can hold 7% more water for each degree it warms, and the result is quicker accumulation of rain clouds and heavier downpours. This means more floods where it does rain, and more drought where it doesn’t. 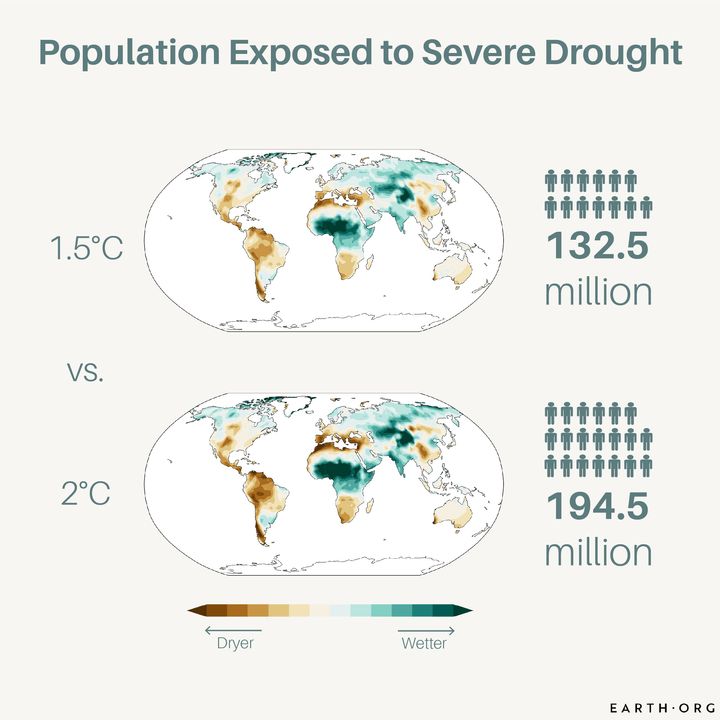 Other problems like wildfires, hurricanes and storms are being exacerbated by the changes in rainfall patterns, and even these can have knock-on effects. As an example, when wildfires decimate forests, tree roots stop holding the ground in place and rockslides become more likely.

This isn’t theoretical anymore. Climate change is already affecting every inhabited part of the globe in a variety of ways. 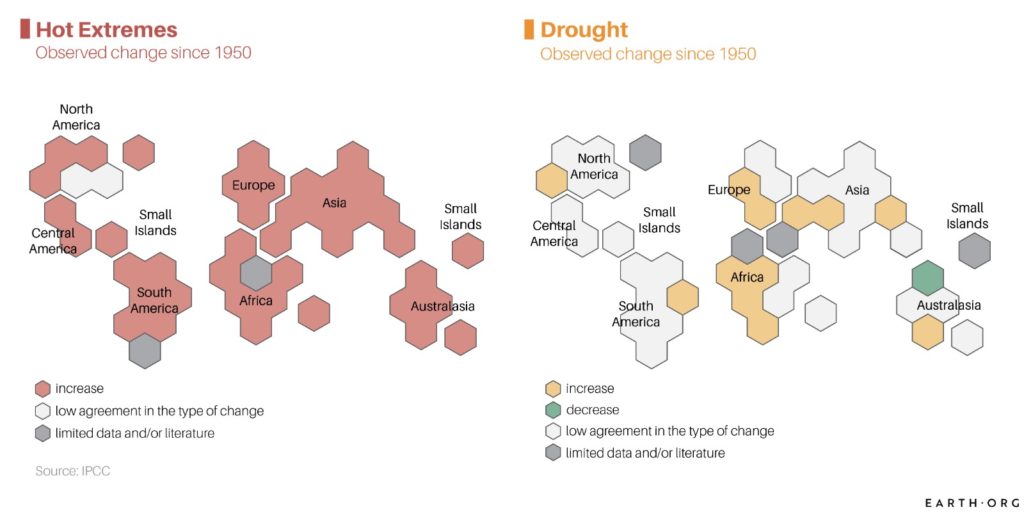 What we can expect for the future

The IPCC report makes one thing clear. The warmer we let it get, the worse things will be. While it may be too late to prevent climate change altogether, it is definitely worth limiting it.

We are currently on track for around 3C global warming by the end of the century, after which the temperature should stabilize (this is called equilibrium). Were this to happen, sea level rise would continue for decades to centuries, and other systems might similarly continue to deteriorate.

An important concept for the future is that of a tipping point. This is when an ecological system is pushed to the brink, and begins its irreversible transformation into something else. For instance, the Amazon rainforest has currently lost between 15 and 17% of its area. If it loses enough, it will begin turning into a dry, shrubby savannah with only a fraction of the biodiversity and natural bounty it provides us with now (not to mention the billions of tons of carbon it would release). The only problem is, we don’t know how much deforestation will tip it over the edge. Our researchers’ best estimate is between 20 and 40% deforestation, leaving us with much uncertainty. 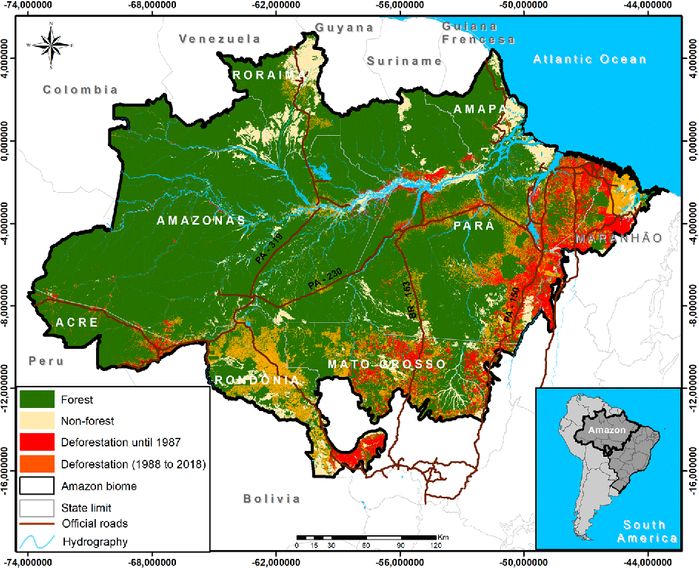 Another crucial tipping point is that of Antarctica. It contains enough water to increase sea levels by ~60 meters, which would submerge nearly every coast in the world. The continent’s melt rate has increased, and icebergs 4 times the size of London have been observed breaking off. Past a certain amount of melt, it could become committed to losing much more ice, no matter the temperature.

What we’ve described so far only covers a fraction of the consequences of climate change, yet we are having difficulty as a civilization to address it. The truth is that most of us won’t experience ostentatious manifestations of climate change until things get really bad. The average person in town won’t see the crop failure that got replaced by imports, nor the drought afflicting a faraway country.

Sadly, lower-income countries are far more vulnerable to climate change despite having contributed virtually nothing compared to higher income countries. 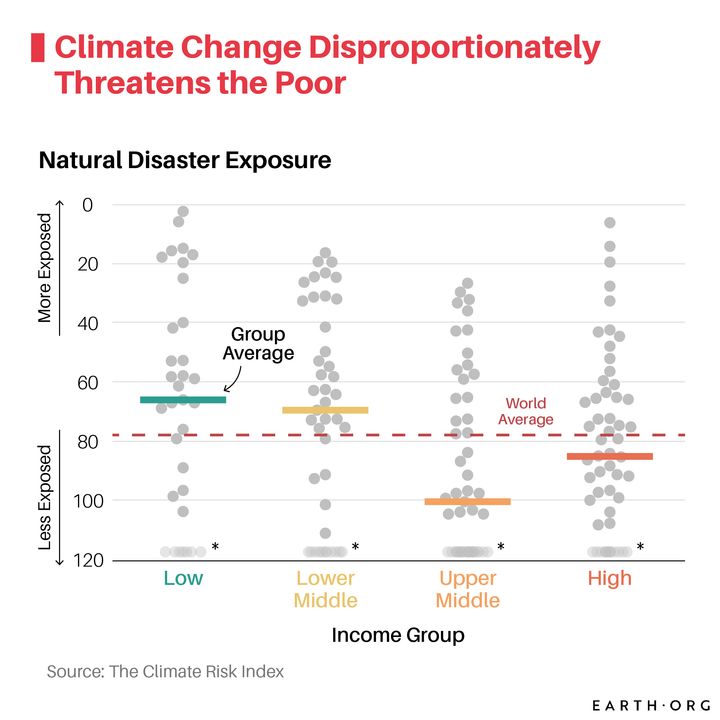 One of the biggest barriers to our ability to deal with climate change is the timeframe. Most politicians and businessmen operate with a 2 to 5-year mindset, but what is optimal for the short-term is proving detrimental to the long-term. A shift is needed, though how to induce it remains to be seen.

So, what is climate change? Climate change is one of the most complex, multi-dimensional problems humanity has faced. It tests our cohesiveness as a global society, and our ability to think long-term rather than focus on the now. It might cost us, but it might also teach us.