Human fossil fuel combustion has exponentially increased the amount of greenhouse gases in our atmosphere. Even if we stopped emissions today, (which we won’t) temperatures would continue to increase for a decade. If we could make geoengineering work, we might be able to mitigate or reverse the warming we’ve caused so far.

We’ve been tampering with the climate and our environment since the first agricultural revolution. Increased, more reliable food sources helped us more or less double our population every 25 years (according to Malthus). Like termites spread around the globe, we’ve chipped away at forests and burned fuels for fire for millenia. But as we all know, our industriousness in the past 250 years outweighs that of the previous 10,000 with ease. Pumping carbon dioxide and other greenhouse gases (GHGs) into our atmosphere came hand in hand with unprecedented technology, wealth, health, comfort and more. Only today is the resulting heat capture becoming noticeable, along with its cascading effects on our weather and biosphere.

Asking our society to change its ways is a tall demand, since we have become somewhat enslaved to an economic system that has taken a life of its own. What is more, as money becomes entangled with politics, the gridlock tightens. Instead of “less is more”, today more is not enough; rather than relent, why not stay on the same track and use our knowledge and means to fix what we’ve done? In a nutshell, geoengineering is a proactive approach to regulating our climate.

What is geoengineering exactly?

The goal of geoengineering is to reduce our atmospheric temperatures, typically by sucking carbon dioxide out of the atmosphere, also known as carbon capture, or “negative emissions technologies”.  This has gone from an option to a widely accepted necessity if we are to avoid the worst of climate change.

Strategies to remove atmospheric CO2 include storage in forests and soils, or underground burial after combustion or chemical capture. However, they are too energy and cost-intensive to be worthwhile at the moment (although researchers are making progress). 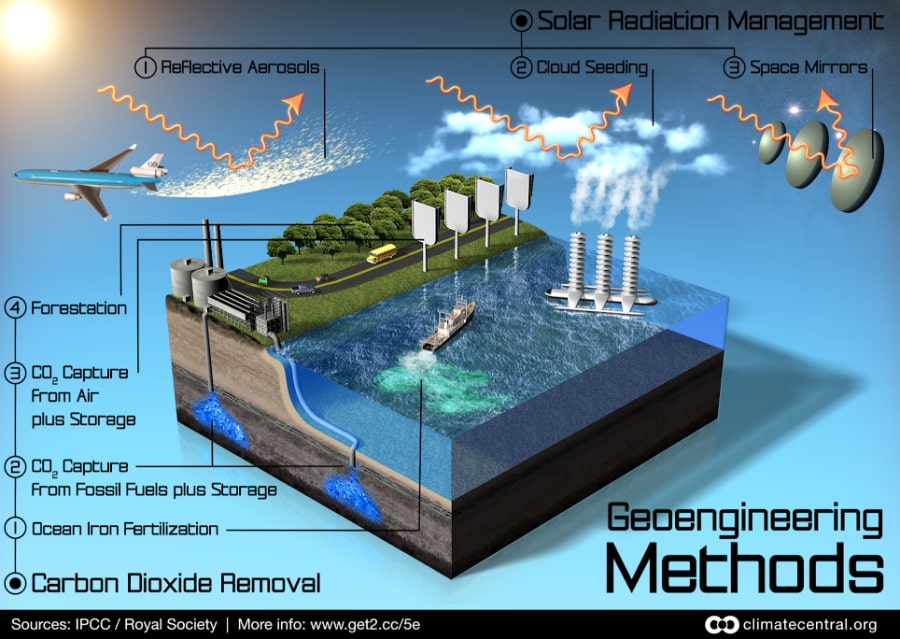 The second largest school of geoengineering is that of solar radiation management (SRM). It comprises all methods used to reflect some of the incoming sunlight back into space. While these would theoretically help lower temperatures, carbon concentrations would continue to acidify our oceans.

A popular idea is aerosol injection. It is best exemplified by the Mount Pinatubo eruption in 1991, where a massive amount of small particles were blasted into the stratosphere, and two years of global cooling ensued.

Airborne salt particles are one of the most powerful cooling factors in our atmosphere. They are derived from oceanic evaporation and many propose spraying saltwater into the clouds to magnify this phenomenon. Since cloud droplets form around small particles, this would also enhance cloud formation, which also helps albedo, the reflection of sunlight back into space.

Albedo is reliant on bright surface colors, whereas heat absorption is driven by darker ones. Thus, a simple approach to cooling our atmosphere is to increase the amount of white surfaces. We could create white cities, and some scientists even propose using ships to create foam over the ocean which covers 71% of our planet’s surface.

A more ambitious project involves sending giant mirrors into orbit. Scientists have stated that a 2% reduction in incoming sunlight would be enough to offset the warming from double the pre-industrial CO2 levels (560 parts per million, while we stand at 410).

We could also remove a particular type of cloud that retains heat known as a cirrus cloud. Their heat-trapping effect is larger than all human-emitted CO2, but the consequences on weather patterns is hard to determine.

Finally, a more biological proposition involves fertilizing micro-algae growth in the ocean using iron. This helps them proliferate, and they capture carbon through photosynthesis, like plants. Of course, uncontrolled algal multiplication can lead to dead zones, and adequate monitoring would require many man hours and energy.

We have a range of ideas that could help mitigate or even overturn the warming we’ve caused so far. However, even putting energetic constraints aside, geoengineering used to be a scientific taboo for a reason: despite our ever-growing understanding of the planet’s climate, we are still pretty clueless. Any of these large-scale solutions could end up having repercussions far worse than what we currently have in store.

Moreover, environmental damage from plastic and chemical pollution wouldn’t slow, nor would ocean acidification (unless we capitalize on carbon capture and storage). The most likely scenario is one where we turn to these solutions out of necessity despite not having a full understanding of the consequences.