What is Permafrost and How is it Emitting Methane?

Permafrost is a permanently frozen layer below the Earth’s surface, consisting of soil, gravel, and sand, usually bound together by ice. Accelerating permafrost thaw is an issue of great concern to the scientific community and, increasingly, the general public. Rising temperatures are disrupting the balanced state of an ecosystem leading to the emission of methane (CH4), a potent greenhouse gas. Without urgent action to curtail the warming of our planet, half of the world’s permafrost could disappear by the year 2100.

The word ‘permafrost’ was coined by Siemon William Muller, an American geologist as a constriction of ‘permanent frost’. It is defined as a ground that remains frozen for at least two consecutive years and is essentially a mixture of rock, soil, sediment, ice, and organic material. Occurring at high altitudes and latitudes, permafrost covers about 24 % of the Northern Hemisphere. The large majority is found in Russia and Canada near and above the arctic circle.

Permafrost is isolated from the atmosphere by a boundary called an “active layer”, consisting of live plants in summer, with added snow in winter. The active layer transfers heat from or to the permafrost. Permafrost holds the largest global carbon reserve, estimated to contain 1,400 billion tons of carbon, nearly double the amount present in the atmosphere. 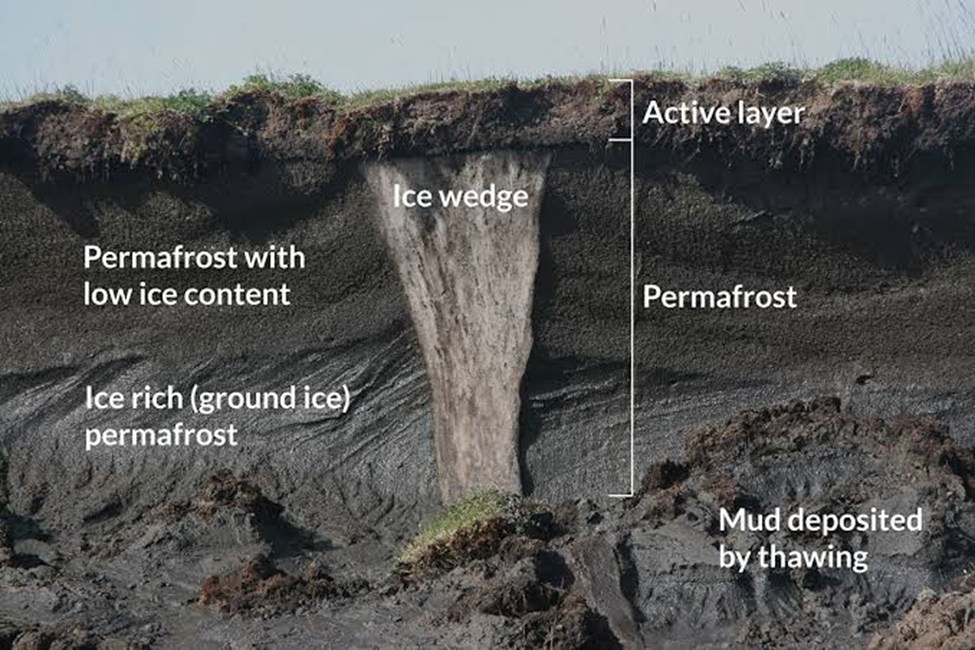 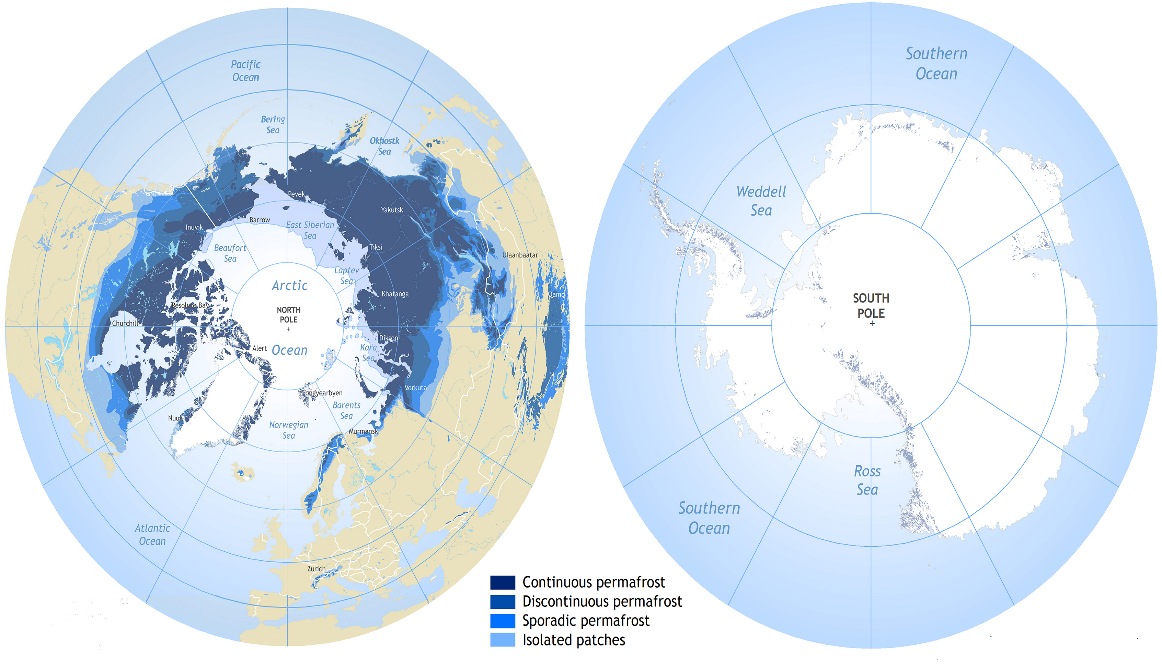 Methane is a natural gas that contains a carbon atom bonded to four hydrogen atoms. Even though methane constitutes only 0.00018 percent of the atmosphere, it is responsible for about one-sixth of the last  few decades’ global warming. Estimates for arctic methane emissions have gone from 0.5 million tons to 3.8 million tons a year in 2006, then up to 17 million tons in 2013. We don’t have solid measurements yet, but we know the phenomenon is gaining momentum as we speak. A study conducted by Knoblauch et al. 2018 reveals that permafrost soils from the Northern pole would generate one gigaton, or 1000 million tons of methane by 2100. 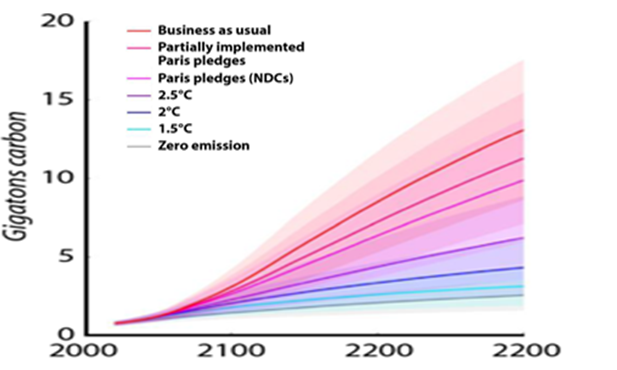 What Happens When Permafrost Thaws?

As temperature rises, frozen organic matter is made available for decomposition into CO2 if oxygen is available or CH4 if not. Since these warm the atmosphere in turn, a positive feedback, but also a vicious cycle is triggered. 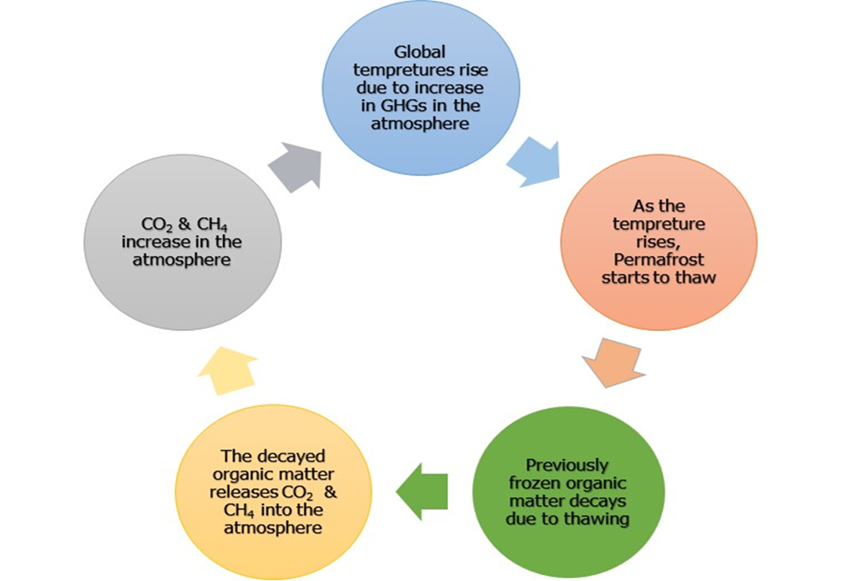 Impact of global temperature on permafrost

Polar and high altitude areas are more sensitive to climate change than the rest of the world. They have been warming at three times the global average rate, as demonstrated by exceptionally intense wildfire seasons and rapid glacier melt. Permafrost loss is less obvious but just as worrisome. A detailed study revealed that, on average, permafrost around the Arctic, Antarctic, and the high mountain warmed by 0.3 °C between 2007 and 2016. 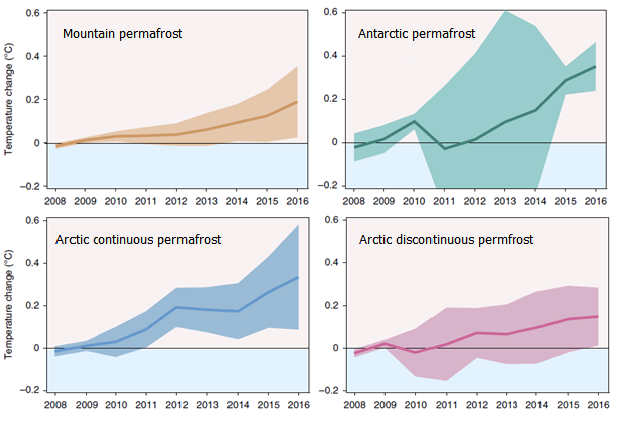 How to Stop Permafrost from Thawing

Permafrost thawing can be controlled by curtailing our carbon footprint, purchasing environmentally friendly goods, and encouraging eco-friendly businesses, regulations, and policies. Other more imaginative methods include:

A recent study published by Beer et al. 2020 in the Scientific Reports, a Nature journal reveals the possibility of using hoofed herbivores such as herds of horses, bison, and reindeer, etc. to prevent the thawing of permafrost. According to the authors, “increasing the population density of large herbivores in the Northern high-latitude will increase snow density and therefore minimize the insulation strength of snow during the wintertime”. The animals trample by compacting the snow surface, allowing cold air to reach the ground.

Researchers from the University of Edinburgh are developing a novel research into the potential application of plants in preventing permafrost from thawing. Plant habitats play an important role in regulating the soil temperature. They provide shade for permafrost soil from direct heat of the sun, and their roots eliminate water making them better insulators.

Ying, K., Cheng-Hai, W. (2017). Responses and changes in the permafrost and snow water equivalent in the Northern Hemisphere under a scenario of 1.5 °C warming. Advances in Climate Change Research, 8:235e244.