Too Hot To Live: Climate Change in Colombia

Nineteen of the twenty hottest years on record have occurred since 2001, not including 2020 which is on track to top the list. Now, research has found that climate change could make Colombia too hot to live in by 2070.

As a species, we have historically avoided living outside of mean annual temperatures (MATs) between ∼8°C to 20°C. MATs above 29°C, found only in parts of the Sahara and Saudi Arabia, are generally considered too hot to live in but there are always exceptions. In the early 1900s, the denizens of Dallol, Ethiopia, lived in a MAT of 34.4°C with an average daily maximum of 41.1°C. In comparison, Colombia’s lower altitudinal MAT is 23.9°C, down to 16.7°C and even lower in its high mountain ranges. According to recent research however, nigh unbearable MATs above 29°C could affect up to 68% of the Colombian population by 2070.

Still, the UK consulting group Verisk Maplecroft lists the Colombian cities of Cartagena and Barranquilla, both under 20m average altitude, as two of the major cities at risk of productivity loss from climate-driven heat stress. In truth, Colombia already suffers from extreme heat and drought along the northern coastline, and certain days are too hot to go outside in. This raises serious considerations for the future as climate change is expected to continue increasing temperatures worldwide. Even if we halted emissions today, warming would continue for a few decades at least, because greenhouse gases take around 40 to 50 years to exert their full warming effect.

A recent study by Xu et al (2020) predicts that most of Colombia could heat up to reach MATs above 29°C by 2070. Regions that would stay cooler include the western coast and the Andes mountain range that cut through the country northeast to southwest. 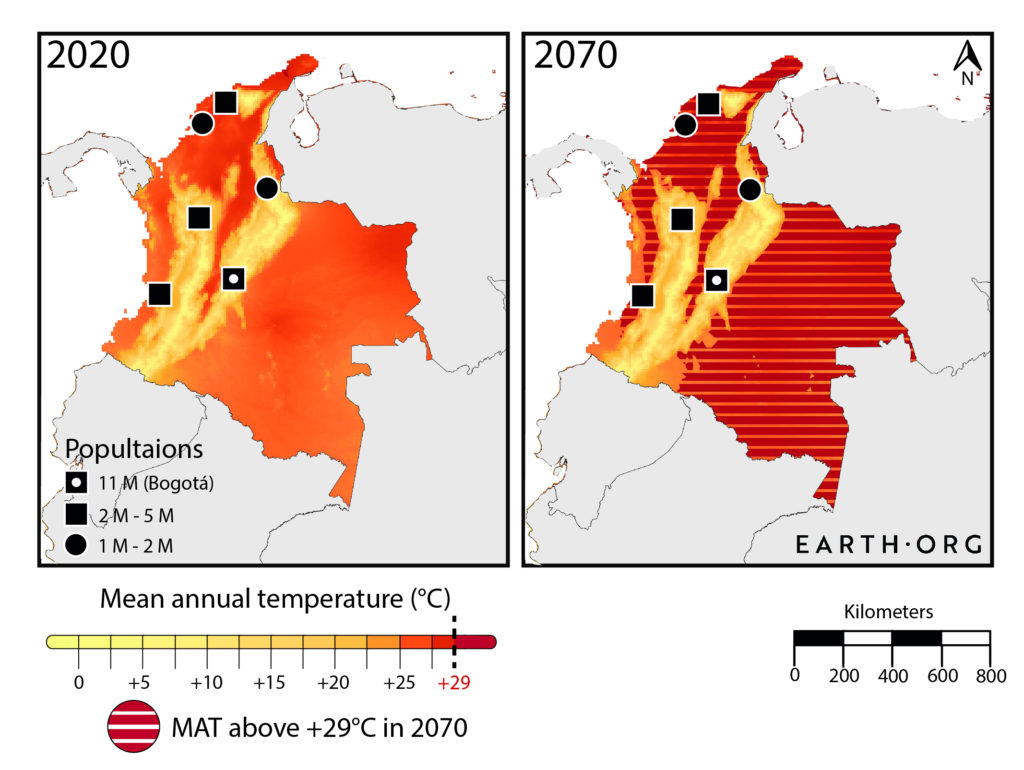 The brighter (yellow) streaks of lower temperature represent the Andes range, where the capital of Bogota and other major cities like Medellin are located. However, the majority of the population lives on the lower plains, and Colombia’s booming economy cannot be relocated to the mountains.

Despite a GDP jump from US $1,500 to US $14,000 between 1990 and 2018, around 27% of the Colombian population remains in poverty, of which 7.5%, or 3.5 million people, live in extreme poverty. Extreme heatwaves are more dangerous for this segment of the population as they often rely on outdoor manual jobs, and have less access to robust air conditioning networks. A large proportion of the population will be exposed to MATs above 29°C, but the concern lies in how many lack the means to adapt. 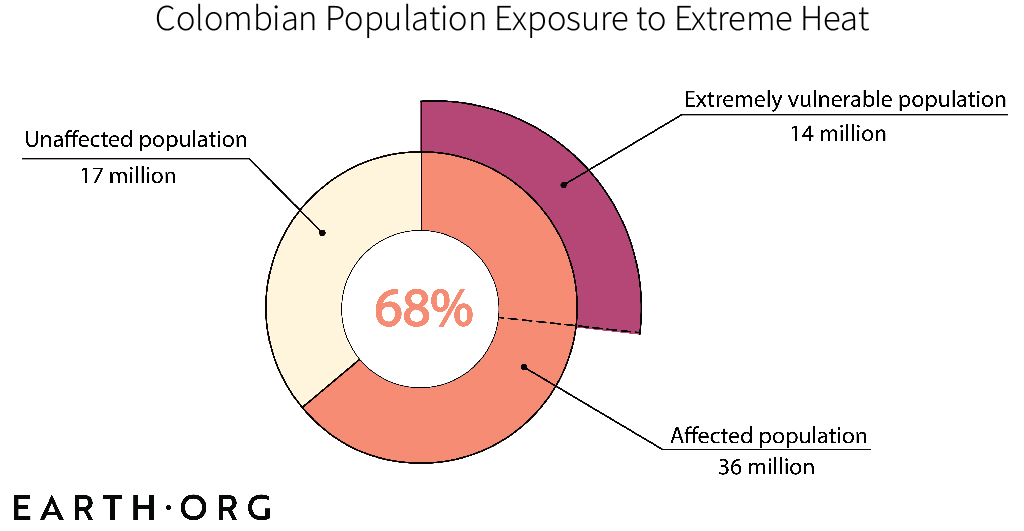 In light of the economic growth Colombia has created for itself in the last few decades, it is safe to assume that most of the population will be lifted above the poverty threshold, and into a better position to adapt. That being said, having nearly 70% of the population live in Sahara-like temperatures with added burden of humidity means that Colombia could truly become too hot to live in. Economic growth means little in the face of the forced relocation of 36 million people.

This scenario is becoming likelier by the day, and it is our duty as a species to gain an understanding of the future we are heading for, in order to make better decisions while we can.