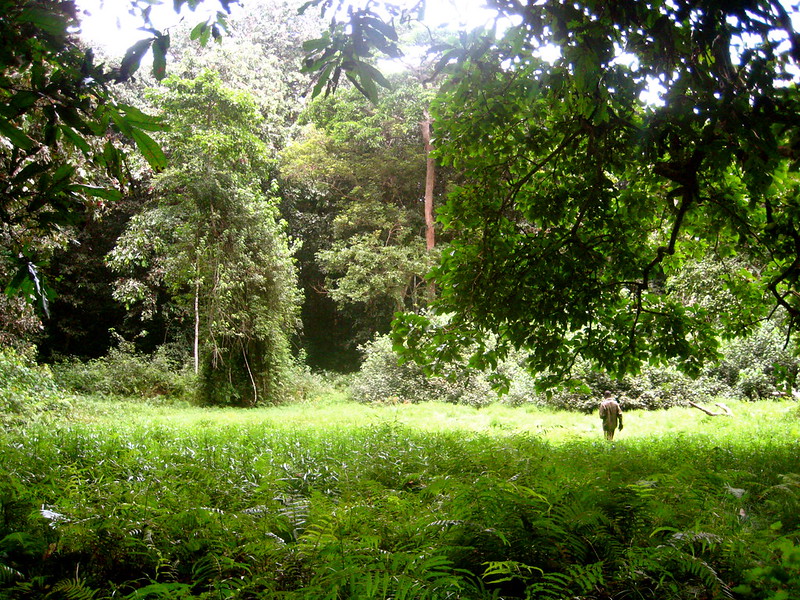 There’s a saying in the Democratic Republic of Congo (DRC) that refers to “Article 15,” a nonexistent paragraph of the country’s constitution during the Mobutu Sese Seko dictatorship in the 1970s. It stands for “figure it out yourself” and acknowledges the wide spread of corruption, implying that people cannot rely on the state to survive. Considered by the World Bank one of the poorest countries in the world based on GDP per capita, as well as being home to 60% of the Congo Basin, the DRC faces many challenges, one of them being the ever-increasing speed of deforestation.

A visualisation of tree cover loss by Global Forest Watch’s Forest Atlas shows that, in the DRC, forest is disappearing far away from main roads and urban conglomerations in the middle of the country.

For Matthew Hansen, head of the Global Land Analysis Discovery (GLAD) laboratory at the University of Maryland (UMD), this loss is the alarming consequence of “Article 15.”

“The DRC is a stateless place where there are no cheap food imports, no oil exports and little food aid,” Hansen told Mongabay. “Thousands of people are pushed into the forests to feed themselves. It is a horrible dynamic.”

While shifting agriculture and fuelwood collection have widely been considered the major drivers of forest clearing, other activities like logging, mining and large-scale agriculture are significant, yet not adequately quantified, contributors, as they often come with the opening of new roads and infrastructure construction, as well as human settlements.

Rising global energy demands, especially for “green” technologies like solar power and electric cars — whose production depends on many of the minerals mined in the DRC — are expected to intensify the exploitation of the ecosystem in coming years.

There’s more: the DRC’s predicted population growth to almost 200 million people by 2050 is expected to exacerbate the trend, overwhelming the creaking institutions that are already failing to provide basic services for the 89 million people living within the country’s borders.

With two-thirds of Congolese living on less than $1.90 per day, the DRC ranks 179th out of 189 countries in the U.N.’s Human Development Index. A history of war and ongoing conflict have resulted in poor economic development and chronic political instability. Currently, the DRC counts more than 4 million internally displaced people.

In a 2007 analysis of the state of the forests after the Congo wars, which ended in 2002, a group of researchers from the Center for International Forestry Research (CIFOR), the World Bank and the French Agricultural Research Centre for International Development (CIRAD) identified a major challenge for the DRC: to reconcile efforts to alleviate poverty and conserve its crucial ecosystems at the same time. To prevent the forests from disappearing, the analysis called for better forest management and financing models.Thirteen years later, the pressure on the Congolese forests has not eased.

“If we go on like this, the loss of forests will continue to increase,” Alain Engunda, outreach and training coordinator at the World Resources Institute in Kinshasa, told Mongabay in an interview. Engunda is also a technical adviser to the Ministry of the Environment and Sustainable Development (MEDD), as well as the National Forest Fund, assisting them to monitor where forest cover loss occurs.

Engunda said his main concern is the country’s increasing urbanisation and the corresponding rise in electricity demand. “In 2010, the capital of Kinshasa had 8 million inhabitants and needed around 5 million cubic meters of charcoal,” he said. This year, Kinshasa’s population stands at nearly 15 million. “If the government doesn’t provide alternatives, the need for charcoal is going to explode because if people don’t have electricity, they cut trees.”

As of 2016, only 16% of Congolese households had access to grid electricity; at the same time, 90% of timber extracted from forests was considered informal. According to Engunda, changing these numbers by providing power using the country’s natural resources could tackle one of the potentially major drivers of deforestation. “But we have not yet made the link between the potential of hydropower and the collection of charcoal,” he said.

Experts agree that poor governance is the biggest threat to the DRC’s ecosystems. “There is no national plan to fight deforestation, that’s the problem,” Engunda said.

One plan that was drawn up is the DRC’s National Strategy for Reducing Emissions from Deforestation and forest Degradation (REDD+), adopted in 2012. It aims to increase and stabilise forest cover to 63.5% by 2030, from the current 58%. However, a recent report published by CIFOR assessing the progress of REDD+ concluded that none of the reforms promised by the Congolese government to improve the institutional environment for the implementation of REDD+ had materialised. It cited “political changes and a lack of finance, capacity and political will.” 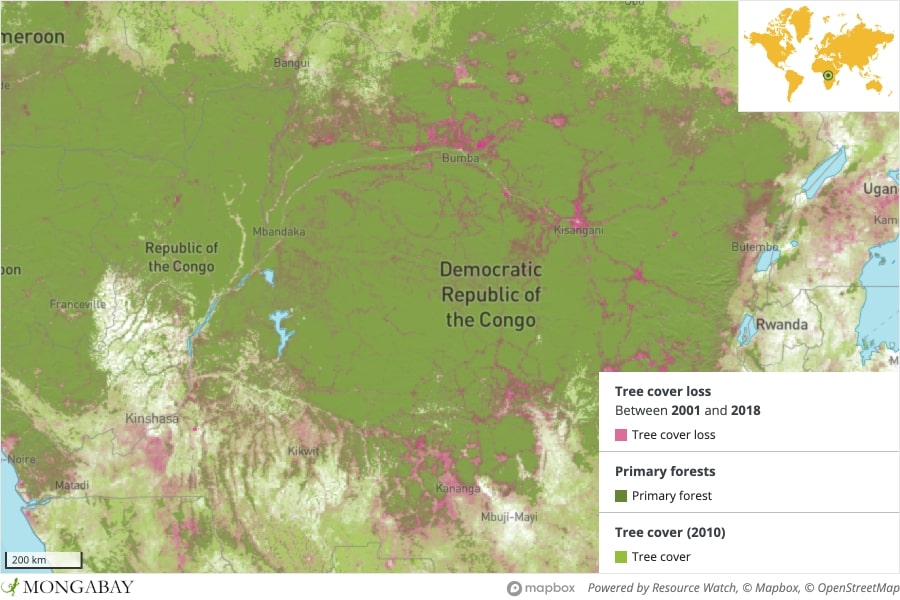 Victories for Communities and Indigenous People

On paper, the DRC has solid regulations regarding its forests. More than 40 laws, decrees and orders regulate the country’s forest sector, most importantly the new Forest Code of 2002. It is also a signatory to 29 international conventions relating to the protection of the environment, including the Paris Agreement and the Brazzaville Declaration.

Signed in 2018, the latter is supposed to protect the 145 million hectares (358 million acres) of the world’s largest contiguous peatland area — an Alaska-sized expanse of forest in the DRC’s Cuvette Centrale region. But already Greenpeace and Global Witness warn that industrial activities are taking place inside the area.

A recent milestone in the forest sector was the adoption of a community forest law in 2016, which grants local communities the right to obtain forest titles and manage their lands. “Now, communities can’t just cut in an uncontrolled way, they need to have a management plan,” Engunda said. “It’s a big step forward.”

While the legislation was received with enthusiasm among civil society actors, challenges remain when it comes to commonly marginalised groups like women and Indigenous people.

Even though women account for the majority of agricultural labor, they still face exclusion from formal land claims and decision-making processes. The same applies to the DRC’s estimated 800,000 to 1 million Indigenous people.

“The government can take their lands at any moment,” said Joseph Itongwa from the Network of Indigenous Peoples and Local Communities for the Sustainable Management of Forest Ecosystems (REPALEF) in an interview with Mongabay. Seminomadic Pygmies inhabit the forests of the DRC, but don’t hold any legal rights to their ancestral lands, which they depend on for food, medicine and spiritual purposes.

After years of campaigning by organisations like REPALEF, in June this year a law proposal was unanimously adopted by the National Assembly that would address these gaps. Once approved by the Socio-Cultural Commission, it can be ratified by the president.

For Itongwa, this comes as a victory for civil society and Indigenous people. However, the DRC’s track record of non-adherence to its own laws dampens expectations.

An example is the logging sector. Even though the Forest Code includes a moratorium on new concessions, it has not prevented the government from allocating permits to investors.

In January of this year, Minister of the Environment Claude Nyamugabo Bazibuhe granted nine forest concessions, covering more than 2 million hectares (5 million acres), to two Chinese companies. Civil society organisations denounced the allocation of these permits, accusing the government of violating the moratorium, and launched a legal complaint. Nyamugabo Bazubuhe denies the allegations.

Suspected Surge in Deforestation During COVID

Though not adequately quantified, industrial operations like logging and mining constitute major threats to the forests due to their often uncontrolled nature. According to Raoul Monsembula, who coordinates Greenpeace’s forests campaign in Kinshasa, “politicians and high-ranking military officers illegally collaborate with Chinese companies. Sometimes timber is cut outside the designated areas, sometimes without permits.”

This, again, is a breach of the Forest Code, which strictly regulates when, how much and where a company is allowed to log within a granted concession.

In an interview with Mongabay, Théophile Gata, executive director of the Kinshasa-based Support Centre for the Sustainable Management of Tropical Forests (CAGFT), identified the problem being “either in the process of obtaining forest concessions or companies not complying with regulations related to the exploitation of forest resources.”

“The industry is not administered transparently,” he said. There are no exact figures detailing how much timber is taken from Congolese forests illegally and how it occurs, but there is a strong correlation between access into forests and industrial logging, as large-scale operations open up roads into previously untouched ecosystems.

Gata and other experts in the DRC say they have detected an increase in illegal activities this year due to measures related to COVID-19.

“The pandemic was a blessing for illegal loggers,” Greenpeace’s Monsembula said. In March, WWF released a report finding above-average levels of deforestation in six countries. The study used data from the University of Maryland to compare forest loss in March 2020 with the same period from 2017 to 2019. It found that the DRC lost 100,765 hectares (248,996 acres) of forest this past March, more than double the 47,561 hectares (117,526 acres) lost in March 2017.

These findings are supported by incidents on the ground. In May, 1,000 illegally cut logs were discovered in Kinshasa’s ports of Kinkole and Maluk.

In a public appearance, Minister Nyamugabo Bazibuhe visited the site and declared that “the sector will be cleaned up.” His visit was followed by the issuing of a circular prohibiting the “purchase, sales or sawing of logs on the islets and along the Congo River.”

Whether these political actions will take the pressure off the country’s forests, however, is yet to be seen.

This article was originally published on Mongabay, written by Victoria Schneider, and is republished here as part of an editorial partnership with Earth.Org.