Did China Really Ban the Pangolin Trade? Not Quite, Investigators Say 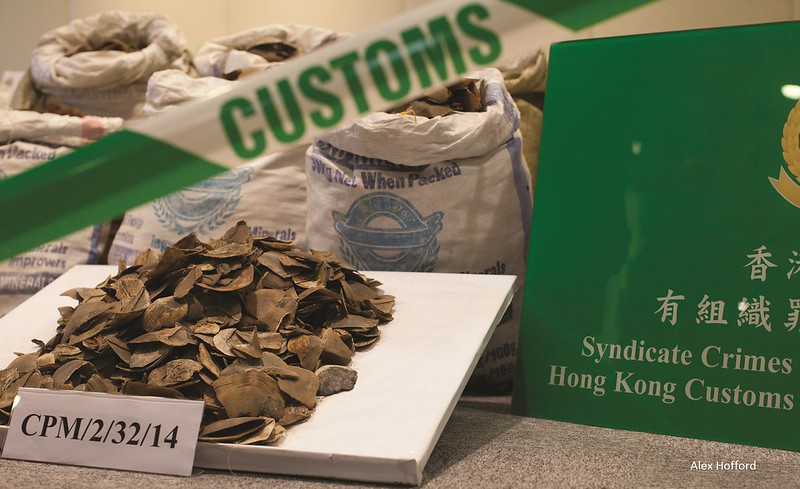 In early June, it was widely reported that the Chinese government had banned pangolin scales in traditional Chinese medicine (TCM), and that all pangolin species now had the highest level of protection within China. This news grabbed headlines around the world, and conservationists hailed the move as a positive step toward halting the illegal pangolin trade. But some experts say this celebration was premature.

The team at the Environmental Investigation Agency (EIA) recently obtained a copy of China’s 2020 pharmacopoeia, a reference book for TCM practitioners, and found that while pangolin scales had been removed from the list of raw ingredients, pangolin scales were still listed as a key ingredient in various patent medicines.

“We were not surprised to learn that pangolin scales remained in the 2020 pharmacopoeia,” Chris Hamley, senior pangolin campaigner at EIA, told Mongabay. “In fact we had warned soon after the reports started to appear in the international media on 9 June that China’s widely publicized pangolin protections might not mean a total ban on their use in traditional Chinese medicine. This has happened before with leopard bone and bear bile — both were removed as a key ingredient but maintained as ingredients in patent medicine formulations.”

There are also 72 additional TCM products containing pangolin scales that aren’t listed in the 2020 pharmacopoeia, but that can still be legally sold within China, Hamley said. 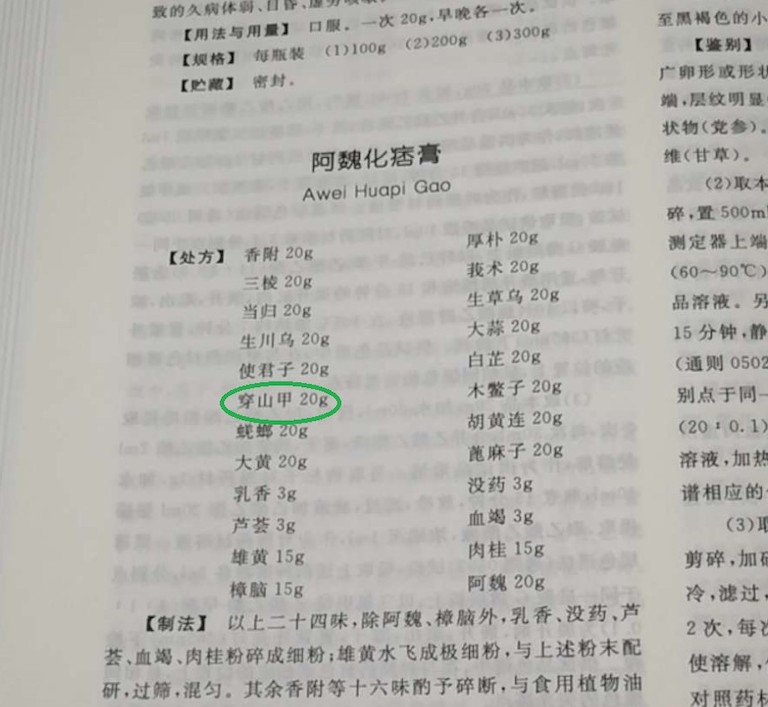 Hamley says the trade may be continuing based on an exemption in Article 27 of China’s Wildlife Protection Law, which specifies that protected wildlife can be sold, purchased and utilized for scientific research, captive breeding, public exhibition or performances, heritage conservation, and other special purposes.

“There are unlikely to be any major changes in demand for pangolin scales,” Hamley said. “The drivers of demand associated with the use of pangolin scales in TCM in China still remain. With licenced companies and hospitals still able to legally produce TCM medicines containing pangolin scales based on formulae in the pharmacopoeia and other national lists, there will continue to be demand for raw pangolin scales from the TCM industry.”

EIA isn’t the only organization to point out the contradictory nature of China’s policy on pangolin scales. TRAFFIC, an NGO that monitors the illegal trade of wild animals and plants, also said pangolin scales were still being promoted as medicinal ingredients.

“The situation is not clear-cut — medicinal use of pangolins is no longer endorsed by the main text of the TCM pharmacopoeia, but pangolin scales are still included in some of the prescriptions listed in the Annex of the printed publication,” TRAFFIC wrote in a tweet to BBC News after it published an article on China’s removal of pangolins from TCM.

“[A]t the very least, every province needs to have a transparent and standardized system to manage pangolin stockpiles to prevent any laundering of illegally sourced pangolin parts into legal channels,” Richard Thomas of TRAFFIC told Mongabay. “As we have seen in recent years, a number of very large-scale pangolin seizures have been made by Chinese customs, so clearly there is ongoing illegal supply of pangolin products that needs to be shut down. There’s a clear need for wildlife protection management departments to co-operate with the traditional Chinese medicine sector to eliminate potential illegal and unsustainable use of pangolin products.”

The eight species of pangolins are the most widely trafficked animal in the world, with more than a million of these animals poached and illegally traded since the year 2000. In 2016, CITES, an international treaty that protects endangered plants and animals, uplisted pangolins to Appendix I, which bans all international trade. However, CITES regulations do not apply to any domestic trade of the species.

UPDATE 06/28/2020: In response to this article, a spokesperson for China Biodiversity Conservation and Green Development Foundation (CBCGDF) stated that there is currently no legal procedure to stop the production of patent medicines, which are owned and protected by various companies, and that the Chinese government has done its best to remove pangolins from TCM.