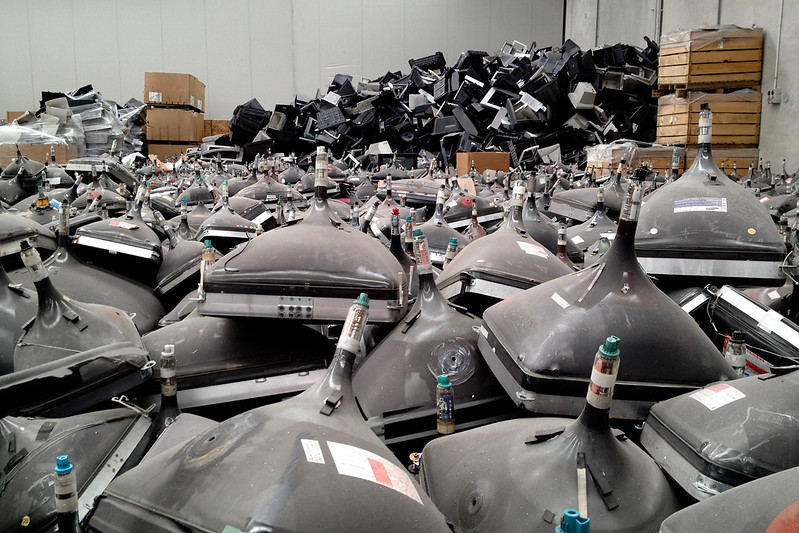 On October 14, the third International E-Waste Day is being held; this year, a particular focus will be given to educating children and youth about the ways to tackle the growing e-waste problem. E-waste, or “electronic and electrical waste,” is electronic products that are nearing the end of their “useful life” and are discarded. Computers, televisions, VCRs, stereos, copiers and fax machines are common electronic waste that can be reused, refurbished or even recycled. E-waste is particularly dangerous due to toxic chemicals that are released when the appliance is buried.

The ongoing debate as to how to most effectively dispose of used and unwanted electronics has become a major issue especially with the growing amount of e-waste. Due to rapid technological advances, many electronic devices that still function are considered obsolete, which leads to excessive debris of e-waste found in landfills.

International E-Waste Day has been developed by the WEEE Forum, an international association of electronic waste collection schemes, and is used to highlight to consumers the importance of repairing or correctly disposing of used appliances with the aim to increase re-use, repair, recovery and recycling. Last year more than 100 organisations from nearly 50 countries organised many promotional activities, ranging from conferences and workshops, school and street collections to social media competitions and campaigns as well as online guides and games.

Most electronic products contain toxic materials such as beryllium, cadmium, mercury and lead which are serious threats to soil, water, air and wildlife.

More specifically, when E-waste gets buried at a landfill, the toxic materials dissolve into a sludge that permeates at the bottom of a landfill. These traces of toxic materials then sink into the  ground below the landfill. This process is known as leaching. The issue arises when huge amounts of E-Waste results in large toxic dissolved pools that eventually pollute the groundwater and the sources of freshwater in the surrounding area.

This, once again, poses detrimental threats to nearby wildlife, causing them to get sick from lead, arsenic, cadmium and other metal poisonings.

In 2019, the world produced a record 59 million metric tons of e-waste, up from 48.5 million tons in 2018, according to a UN report. Out of this, less than 20% is recycled. At this rate, the UN estimates that we could reach 120 million tons of electronic scrap by 2050. This volume of e-waste will present detrimental threats to the environment polluting rivers, lakes and seas, and also release toxic gases into the atmosphere.

What is “Planned Obsolescence”?

Planned or programmed obsolescence refers to the deliberate shortening of electronic products’ life span by the manufacturer in order to circulate new consumption.

In early March, the EU released its Circular Economy Action Plan which requires manufacturers to make products that last longer and are easier to repair, use and recycle. Taking effect in 2021, the plan is a part of the EU’s targets to become a climate-neutral economy by 2050 as outlined in its New Green Deal.

In addition to European legislation, ISSOP is a mark awarded by Spain’s FENISS (Foundation for Energy and Sustainable Innovation Without Planned Obsolescence) certifying companies that produce environmentally respectable goods and services, without planned obsolescence, contributing to efficient waste management and emissions reduction.

The Benefits of Recycling Technological Waste

According to a report published in 2019 by Environmental Science & Technology, it is 13 times more costly to extract minerals from natural deposits than it is to recover them from technological waste for the manufacturing of new devices. Obtaining minerals like platinum, copper and palladium is a rigorous process requiring huge quantities of water and energy. Recycling technological waste would be beneficial for further manufacturing of new electronic gadgets.

With the endless production of e-waste, many countries have recognised the need for proper recycling processes and are working on implementing sustainable solutions.

Besides the EU, some countries are creating their own legal frameworks to anticipate and prevent planned obsolescence. International cooperation and associations are supporting this progress in order to facilitate sustainable and global recycling chains.