El Niño Will Push Global Temperatures ‘Off the Chart’ in 2023, Scientists Warn

The return of El Niño will result in unprecedented heatwaves, making this year even hotter than 2022. Experts have also warned that the climate phenomenon associated with warm air is likely to push global average temperatures well above the 1.5C threshold.

El Niño, a climate phenomenon related to the warming of sea surface temperatures in the central-east equatorial Pacific, is set to return in 2023, bringing “off the chart” temperatures and resulting in unprecedented heatwaves, scientists have warned.

Speaking with The Guardian, experts said its comeback is also making it “very likely” global average temperatures will exceed 1.5C of warming, beyond which even half a degree will significantly worsen the risks of drought, floods, extreme heatwaves, and result in food and water insecurity and poverty for millions of people worldwide. In a report published late last year, the UN warned that the world is already on track to warm well above 2C.

El Niño and La Niña are opposite phases of the El Niño Southern Oscillation (ENSO), a temperature variation between the ocean and the atmosphere over the east-central Tropical Pacific. The first is a warm phase while the latter is the cold phase. They typically occur once every few years, lasting nine to 12 months but sometimes even years. Their frequency is quite irregular, and the warm phase happens more frequently than their counterpart.

According to the National Oceanic and Atmospheric Administration (NOAA), the presence of El Niño or its opposite “sufficiently modifies the general flow of the atmosphere to affect normal weather conditions in many parts of the world.” During an El Niño event, the east-to-west trade winds die, keeping warmer than the normal air in the eastern and central parts of the tropical Pacific. 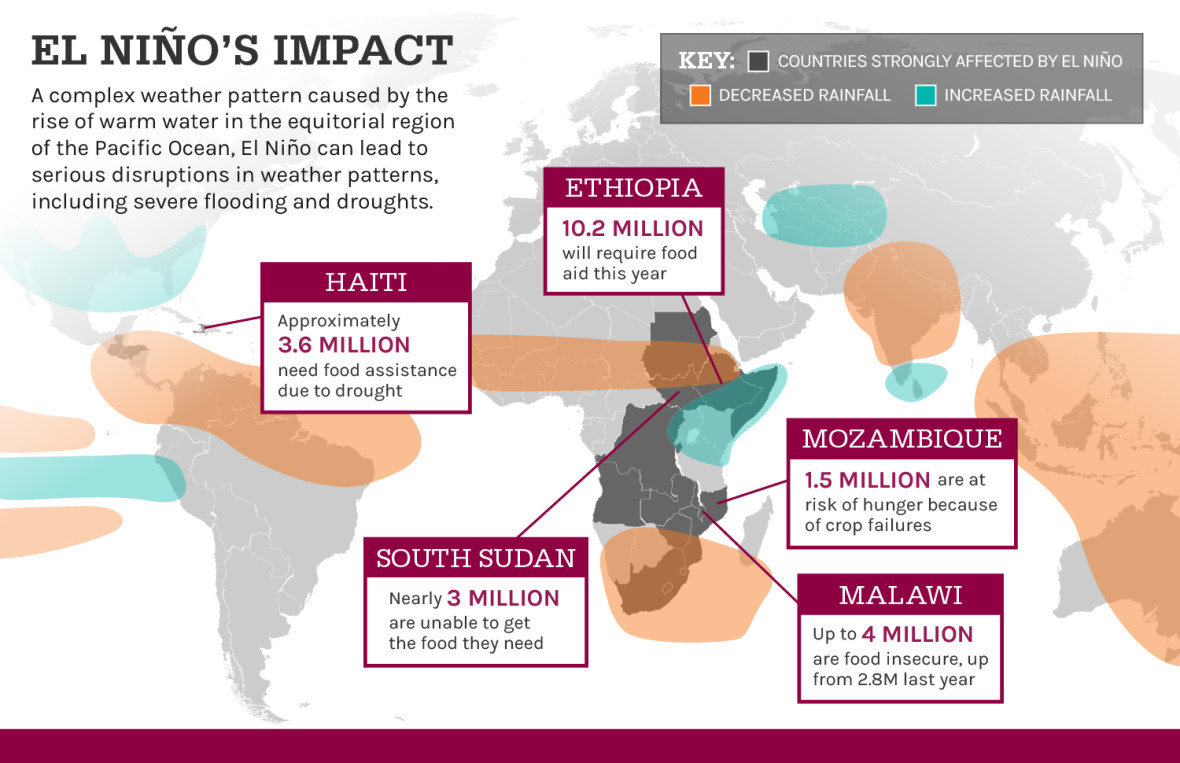 Unprecedented heatwaves driven by a major El Niño event made 2016 the hottest year on record. Now, experts warn that 2023 temperatures will surpass the ones recorded last year, which global datasets ranked as history’s fifth hottest year.

“We know that under climate change, the impacts of El Niño events are going to get stronger, and you have to add that to the effects of climate change itself, which is growing all the time,” Professor Adam Scaife, the head of a long-range prediction at the UK Met Office told the Guardian. “You put those two things together, and we are likely to see unprecedented heatwaves during the next [event].”

Despite typically affecting the central-east equatorial Pacific, Professor Andy Turned at the University of Reading warned that the impacts of El Niño this year could even spread “as far as the northern hemisphere mid-latitudes, with a likelihood of wetter conditions in Spain from summer onwards and drier conditions on the eastern seaboard of the US in the following winter and spring.”