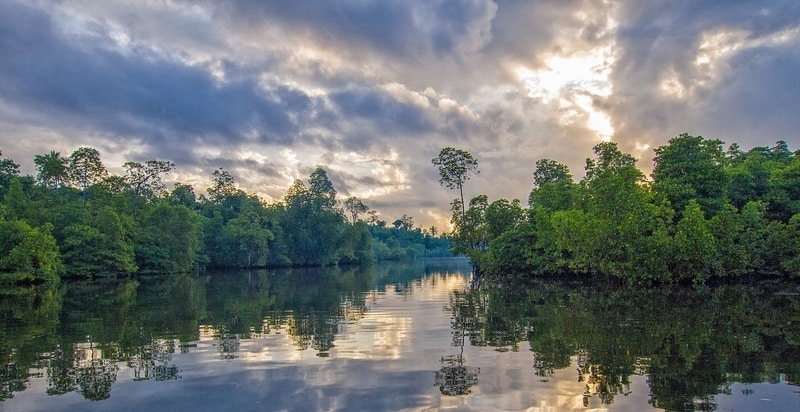 An international team of 22 researchers led by National University of Singapore (NUS) has found that the global loss rate of mangrove forests is less alarming than what has been previously suggested, a welcome development for one of the most valuable ecosystems on the planet.

According to Dr. Daniel A. Friess of NUS, loss rates of mangrove forests were estimated at 1% to 3% per year during the late 20th century. Now, the loss rate has dropped to 0.3% to 0.6%. This drastic drop is due to successful mangrove conservation efforts around the globe.

Mangroves are trees or shrubs that grow along the coastlines of more than 100 countries in subtropical or tropical regions. They provide two different types of habitats for a bustling variety of fauna: underwater roots and tree and shrub foliage above ground. Mangrove roots, in particular, are home to a diversity of invertebrates (particularly crabs, snails and worms) and fish.

Mangrove forests offer many benefits to people, including protection from coastal erosion and storm damage. They also provide people with products such as fuelwood, construction materials and fisheries resources, since mangroves act as nurseries for many coastal fish.

According to Dr. Stefano Cannicci’s research, Hong Kong’s mangroves in particular harbour “eight species of trees, fifty-three species of crabs and forty-two species of snails, which is more than what is currently known for the mangrove forests of the whole African continent.”

The team determined that the reduction in mangrove global loss rates is the product of improved monitoring and data access, changing industrial practices, expanded management and protection, increased focus on rehabilitation and stronger recognition of the ecosystem services provided by mangroves.

In Hong Kong, for instance, much has been done in the past 20 years to conserve mangrove forests. The government of Hong Kong has attempted to preserve mangroves by designating marine parks and reserves to protect marine habitats throughout Hong Kong. The Mai Po Inner Deep Bay Ramsar and the surrounding Inner Deep Bay wetlands is one of these reserves. Home to tens of thousands of migratory waterbirds, the Mai Po Nature Reserve and the surrounding wetlands have been recognised as a Wetland of International Importance under the Ramsar Convention since 1995. Mangroves in Hong Kong represent the largest remaining mangrove patch within the Pearl River Delta.

However, mangroves continue to be threatened by aquaculture, agriculture and urban development. Southeast Asia is a hotspot for mangrove deforestation as mangroves are cut down to make space for aquaculture ponds, cleared for rice paddy cultivation and reclaimed for industrial development.

“However, despite recent mangrove conservation successes, tempered optimism is necessary, as conservation gains are not evenly spread, nor guaranteed into the future,” cautions Dr. Friess. Countries such as Myanmar, Indonesia and Malaysia continue to show rates of loss that are substantially above the global average, due to the rapid expansion of rice cultivation in Myanmar and the rise of oil palm plantations in Malaysia and Indonesia. This is why conservationists need to make sure that conserved and rehabilitated mangrove systems are ecologically functional and adaptable to challenges such as sea-level rise, deforestation and damming.