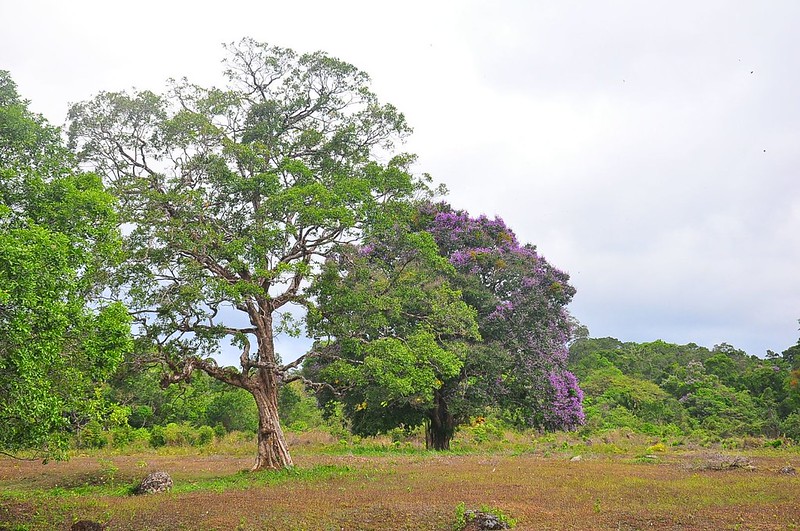 Javan rhinos exist only in Indonesia’s Ujung Kulon National Park (UKNP), and one of the major challenges for the recovery of this critically endangered species is the availability of viable habitat. To remedy this, Indonesia established an additional 5 100 hectares area in the UKNP called the Javan Rhino Study and Conservation Area (JRSCA) to expand the habitat for the rhinos. The International Rhino Foundation is working to ensure that the JRSCA remains suitable for them.

Rhinos move around in search of food sources and mates and will settle into a new area if both are available.

Arenga obtusifolia, commonly known as Arenga palm, is a fast growing, dominant plant species that naturally occurs in the UKNP, and it overpowers other native plant species, including the rhinos’ preferred food plants. Arenga palm can grow to heights up to 16 meters, dominating the canopy. It spreads rapidly and closes off access to the new habitat for rhinos.

To stop this plant species from invading rhino habitats, in 2011, the International Rhino Foundation (IRF) began a programme to open up pathways for the Javan rhino into the new habitat.

This year, 250 local workers that live in communities bordering the UKNP were hired to clear Arenga palm from 50 hectares of the JRSCA. The additional income supplements their work as farmers and comes after the harvest season. Work began in July and is scheduled to be completed by the end of the year.

Photos and videos of Javan rhinos are rare, but this year has seen the release of several videos of this critically endangered species, including two new calves with their mothers born this year, increasing the population to 74 from 72 last year. Now, the IRF has captured a rare video of a Javan rhino eating. You can find the video at https://youtu.be/OVRbsXo3Ggc.

Nina Fascione, executive director of IRF, says, “The opportunity to see this critically endangered species in its natural habitat is the result of the commitment of the Indonesian government, park officials and local farmers.”