Temperatures reached 1.6C above average in June, sparking devastating wildfires that broke out across the continent much earlier than usual. In the meantime, gas-hungry countries are reopening coal plants, further aggravating the heatwave in Europe and delaying climate ambitions and hopes that such extreme events will end in the near future.

We are not even halfway through the summer but Europe has already experienced some of the worst heatwaves on record. In June, temperatures across the continent reached 1.6C above average, sparking the earliest-ever wildfire season.

Spain and Germany dealt with an incredibly intense heatwave this June. Here, temperatures reached highs of 43C and 39.2C respectively. France faced similar conditions as early as May, when thermometers tipped 39C in what has been described as the “hottest month on record”.

Meanwhile, a devastating heatwave in Italy has dried up its longest and most important river, jeopardising local agriculture and hydroelectric supplies and threatening the inflation-weary region with a further rise in food and energy prices. Last week, rising temperatures in the country also triggered a massive glacier collapse in the Alps that killed 11.

Portugal is also suffering the driest conditions in more than a millennium, with scorching temperatures soaring to 46C in central regions and 96% of the country classified as being in “extreme” or “severe” drought. Exceptionally dry soils here have created the perfect conditions for combustion, fuelling devastating wildfires that have so far left dozens injured. On Saturday, 125 blazes were recorded in the country, the highest number in a single day this year. 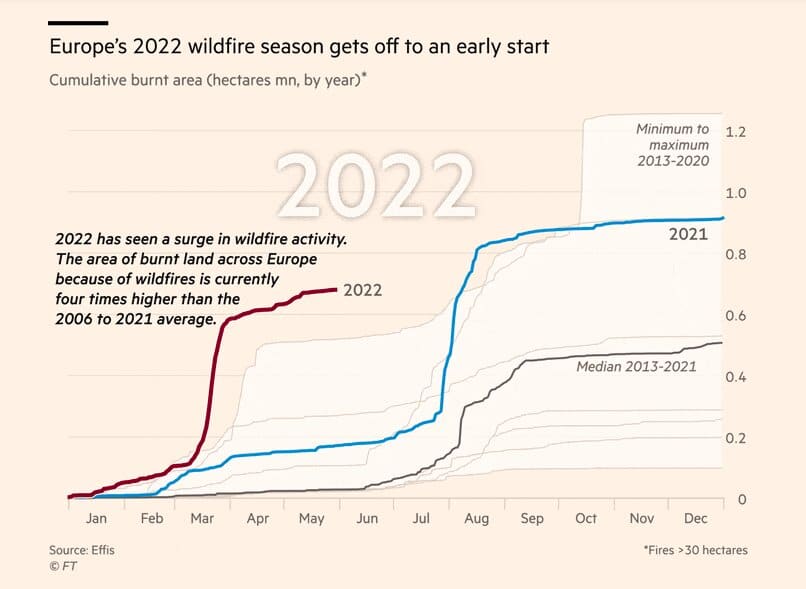 The persistent heatwave in Europe has fuelled the earliest-ever wildfire season the country has ever experienced, as data from the European Forest Fire Information System shows. Indeed, while summer wildfires are nothing new in the Mediterranean region, the scale of these events has been remarkable so far. As reported in the Financial Times, the current burnt area in the continent is four times greater than the 2006 to 2021 average.

To make matters worse, Europe is going battling an unprecedented energy crisis sparked by the conflict in Ukraine, with several countries forced to revive coal plants to mitigate the gas shortage as Russia cuts supplies. Yet, as governments bolster energy stockpiles by burning more coal – despite the EU highlighting that this is just a “temporary” measure – they inevitably postpone their ambitious but much-needed net-zero transition plans. And the extreme weather that the continent is experiencing is a grim reminder of the dangers of delayed climate action.