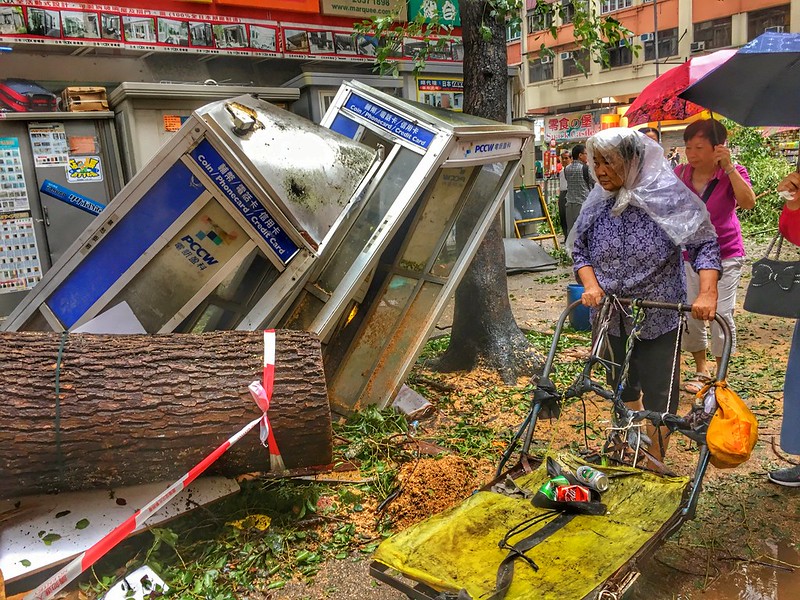 Hong Kong ’s drainage system and rain tunnel network protect the city from once-disastrous flooding caused by seasonal typhoons. Will they be strong enough to endure the effects of the climate crisis?

Drainage engineer Alex Lau, says, “This tunnel intercepts about one third of the rainfall for the northern Hong Kong area. We have about 34 intakes and all the intercepted water will be diverted into the tunnel and carried all the way to the sea.”

Two massive tunnel-boring machines helped dig out the rain tunnel network in Hong Kong, which took five years to complete, beginning in 2007. The 10.5 km tunnel has solved a pressing problem facing the concrete jungle: extreme rainfall. Hong Kong receives about 2,400 millimeters of rain a year, according to the Drainage Services Department (DSD), with about 80% of it falling during the summer months.

Prior to the rain drainage tunnel, Hong Kong already featured vibrant underground tunnel environments, from the city’s Mass Transit Railway (MTR) system to roads which cut through mountainous landscape. The West Drainage Tunnel runs through the hills behind the city and, unbeknownst to most citizens, is located less than a dozen meters below the surface.

Engineers had to remove insecure ground above the tunnel to prevent water seeping through and infiltrating the system. Furthermore, to tackle the difficulties that coincide with building such a tunnel network, it was built from the bottom up, collating gravel and debris out of subterranean platforms- this also helped limit disruption at street level.

Hong Kong summers are hot and humid, starting in June and ending in September, with high temperatures, strong typhoons and frequent rainstorms.

The colour-coded warning system for rainstorms, issued by the Hong Kong Observatory (HKO), notifies millions of residents on what precautions to take during a particular weather signal. Introduced in 1967, the alerts specifically warn the public to avoid unnecessary travel due to the danger of road accidents, or potential landslides caused by rain in the more mountainous parts of the city.

When a black rain warning is issued, defined when more than 70 millimeters of rain falls per hour, schools and workplaces shut. Though only minor flooding occurs during black rain thanks to the giant underground tunnels, in the past they caused catastrophe across the city.

In September 1906, Hong Kong was hit with one of its deadliest typhoons, which killed approximately 15 000 people- 5% of the city’s then population of 320 000. Thousands lost their homes and the city spent millions on water damage repair and control.

In the past, Hong Kong suffered hundreds of fatalities due to tropical cyclones and improper infrastructure in place to help manage the effects of such disasters. Heavy urbanisation only furthered flood-relating problems due to natural, soluble ground of grass and mud being paved over by concrete and tarmac- which, rather than absorbing rainwater, allows for accumulation that eventually leads to flooding. This presented a difficult predicament for Hong Kong- as the financial industry was growing due to urbanisation and industrialisation, the health and safety of the public during tropical cyclones was under significant threat.

Hong Kong uses a three-pronged strategy to mitigate the risk of flooding from heavy rains. Since 1995, the DSD has spent $3.8 billion on various projects, including the installation of drainage systems spanning 2 400 kilometers in length, 360 kilometers of river channels, four vast underground tunnels spanning 21 kilometers and four storm water tanks. Currently, another 11 tanks are being constructed.

The Hong Kong West Drainage Tunnel is the largest of the four and runs from the mountains above Tin Hau, past the financial districts of Admiralty and Central, to Cyberport. At its widest point, the tunnel is 7.25 meters in diameter. Pumps are engaged at times of heavy flow, otherwise gravity assists in carrying water downwards.

Other solutions include dykes to protect rural villages and channels dug to temporarily store water. These solutions that direct rainwater away from vulnerable areas to the ocean, have helped reduce the number of flooding blackspots from 126 in 1995, to just five today- as pointed out by a government paper published last March.

Below Hong Kong’s Happy Valley Racecourse resides one of the city’s largest storage tanks which, at its fullest, can hold up to 60 000 square meters of water- the equivalent to 24 standard swimming pools. In addition to protecting the racecourse itself, neighbouring expensive real estate has also been spared from experiencing flooding since the tank’s creation in 2012.

Happy Valley is also indicative of the DSD’s future plans to recycle rainwater citywide. Some of the water that falls on the racecourse is collected and reused for irrigation and to flush toilets in nearby housing estates. 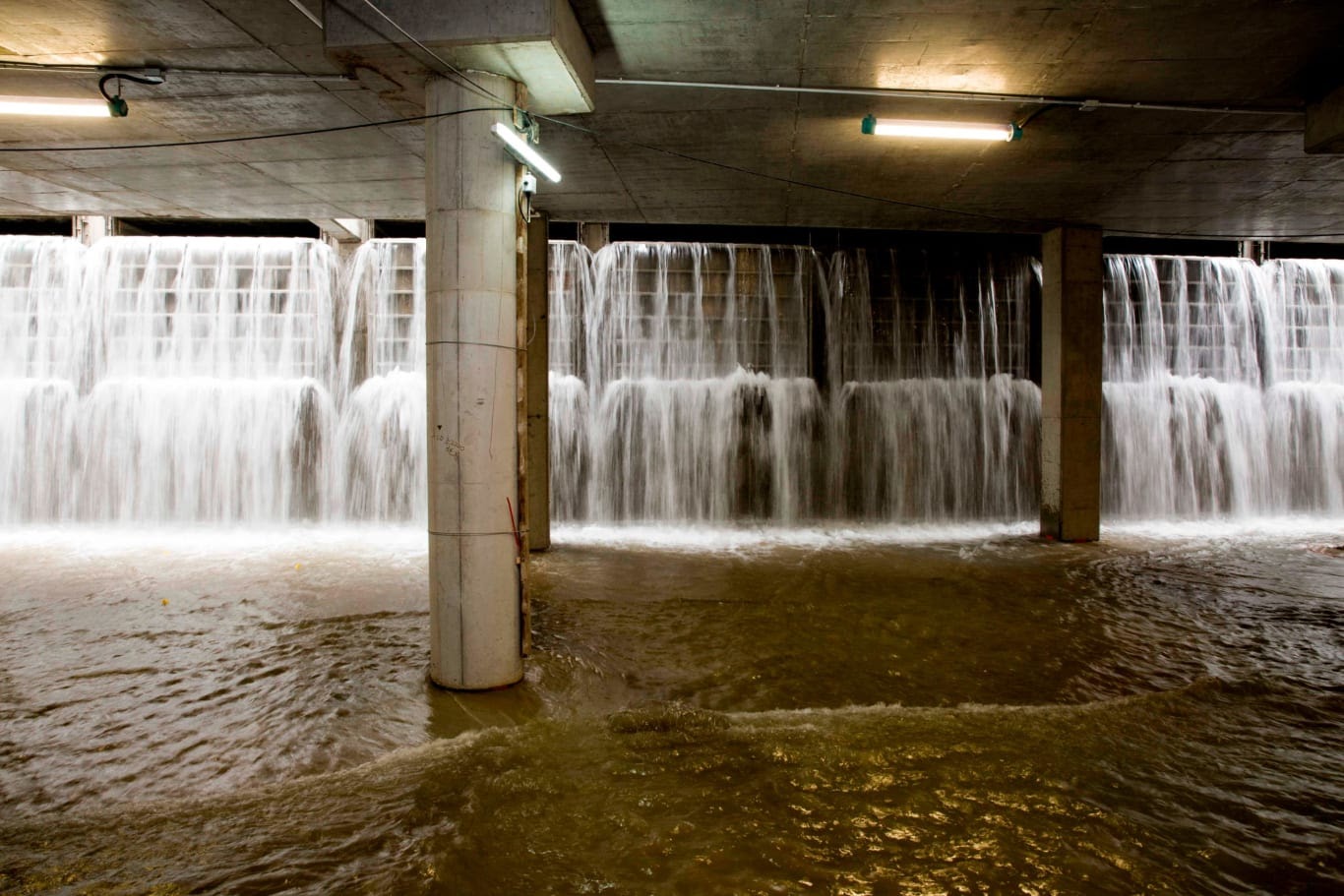 The achievement of Hong Kong’s flood-management system cannot be overstated. Following the disastrous Typhoon Mangkhut in 2018, the Hong Kong Observatory’s senior scientific officer Ping-Wah Li told CNN that, as a result of global warming, “rain from tropical cyclones will increase … and sea levels will continue to rise, increasing the threat of storm surges and coastal inundations.”

Though some work has been achieved to bolster Hong Kong defenses, Edward Ng, professor of architecture at the Chinese University of Hong Kong, noted that more investment is required in order to properly defend the coast. He says, “The design standard is based on past history. It can cope with what happened thirty years ago, but not with what will happen in the next fifty years.” This view is shared by other engineers in the city.

Potential design solutions include porous pavements, protected wetlands, rain gardens and green rooftops- all of which can help absorb rainfall.  Dubbed “sponge cities”, which feature these developments, have already been tried in mainland China with some proven success.

The Civil Engineering and Development Department (CEDD) engaged experts in April 2019 to conduct research on storm surges and waves in order to examine the impacts of extreme weather conditions on vulnerable areas in Hong Kong. Based on the findings of this study, the government has stated it will formulate ‘appropriate protection measures, including improvement works and management measures etc, to mitigate the impact of extreme weather and climate change on the low-lying coastal or windy areas’.

Architects have recommended that Hong Kong alter its infrastructure to become more green, like developing porous pavements, protected wetlands, rain gardens, and green rooftops, all of which can help absorb rainfall. So-called “sponge cities” have already been trialed in China, with some success.

Even as the climate crisis leads to rising sea levels and serious flooding in parts of the world, it also has a major impact on global water resources, with the number of countries dealing with extreme water crisis growing.

DSD’s senior engineer, Richard Leung, suggested that greater measures are needed to tackle rainfall, beyond simply intercepting and diverting it and extending to more sustainable tactics such as storing, purifying and reusing it- efforts which would subsequently reduce the pressure on existing water resources and help overcome future complications that result from the climate crisis.

Currently, some rain is collected to be reused for irrigation and flushing water in Hong Kong, however most is dumped back into the sea- a devastating practice for a city which imports over 70% of its freshwater from mainland China. With rising temperatures comes greater water-insecurity, and Hong Kong has the potential to avert such an outcome through better rainfall use.

“In the past, we just discharged, but now we’re talking about using the water as much as possible,” Leung said. “We don’t know exactly how it is changing, but we know the climate is changing, so we have to be prepared.”