How Does Cocoa Farming Cause Deforestation?

World Chocolate Day is celebrated every year on July 7. This is a good time to reflect on the chocolate industry’s dirty secrets and its impact on the environment. Especially in West Africa’s countries such as Ghana, Nigeria, Cameroon, and Côte d’Ivoire but also in Latin America and Southeast Asia, cocoa is linked to incredibly high rates of deforestation and biodiversity loss. But hoe exactly does cocoa farming cause deforestation and what are these countries doing about it?

Chocolate comes from the pods that grow on cocoa trees, which are small plants that only grow in the tropics. Every year, approximately 4.7 million tons of cocoa are produced worldwide. About 70% of the global supply comes from West Africa and a significant portion, albeit lower, from Indonesia.

Much of today’s cocoa is grown in monocropping systems – an agricultural practice where a field is used for the production of pure stands of one crop only. This controversial technique is infamously known for reducing the availability of certain nutrients and degrading the soil, thus disrupting food systems. Furthermore, monoculture cultivation is often undertaken with a heavy reliance on pesticides and other chemicals which pollute the soil as well as waterbodies such as rivers and streams, threatening marine wildlife.

Fortunately, cocoa can be grown in a much more sustainable and eco-friendly way known as shade-grown agroforestry, which entails planting cocoa in and among diverse trees and crops. This technique can bring a wide range of ecological benefits, such as biodiversity conservation of flora and fauna, carbon sequestration, preservation and strengthening of soil moisture, and microclimatic control. It can also help farmers by facilitating diversification and improving food security.

While agroforestry should not replace primary forests, this system should be used to strengthen the resilience of cocoa production regions and restore degraded land, a study suggests. “Ideally” – the authors write – “all monoculture cocoa is over time replaced with agroforestry cocoa, with progressively more robust agroforestry systems put in place.” 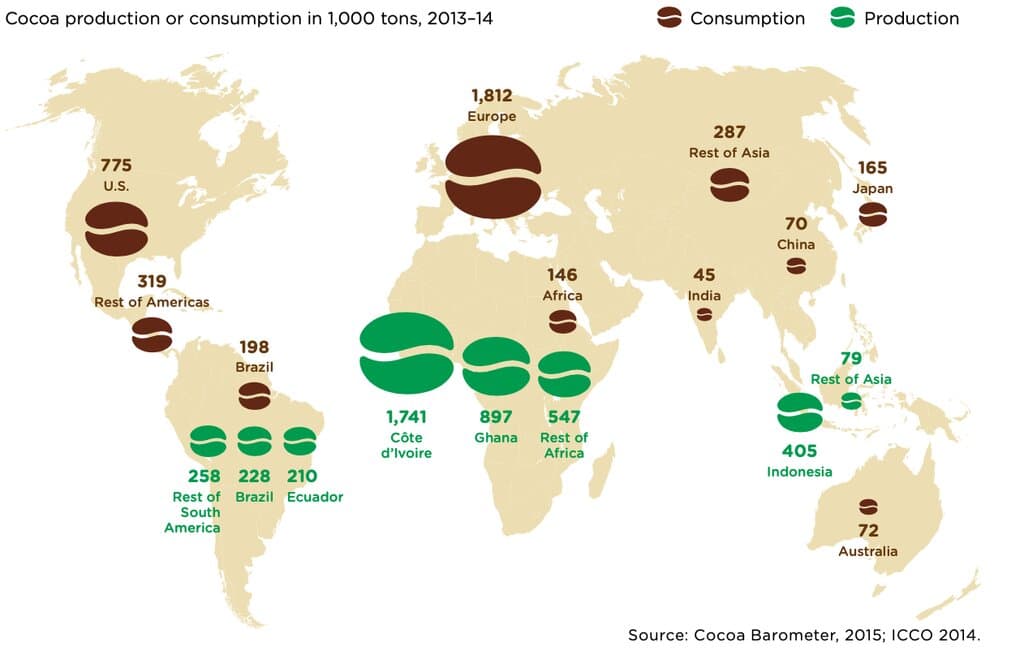 How Does Cocoa Farming Cause Deforestation?

In Africa, 26% of the land is classified as forest. Unfortunately, according to the Food and Agriculture Organization (FAO), nearly 4 million hectares of African forests are being cut down each year, at almost double the speed of the world’s deforestation average.

Worldwide, almost 80% of the total deforestation is caused by agricultural production. While soy, timber, palm oil, and livestock are the big drivers of deforestation globally, in West Africa, the forest clearings can be attributed to cocoa farming, the continent’s largest crop. Nearly three-quarters of the world’s cocoa is produced in just four African countries: Côte d’Ivoire – the world’s single largest producer and exporter of cocoa beans, accounting for 2.2 million tons a year – Ghana, Nigeria, and Cameroon. Together, these four countries produce nearly 3 million tons of cocoa every year, enough to satisfy more than half the global demand.

A report by the World Cocoa Foundation (WCF) and Mighty Earth found that one-quarter of Côte d’Ivoire’s 300,000 acres of forests and 10% of Ghana’s tree coverage have been cleared for cocoa production between 2001 and 2014. In Indonesia, 1.7 million acres of forest were cleared for cocoa between 1988 and 2007, equivalent to 9% of the nation’s total deforestation for crops. Moreover, a staggering 40% of plantations are built illegally inside protected areas. This means that nearly 17% of the world’s yearly cocoa output is produced illegally. 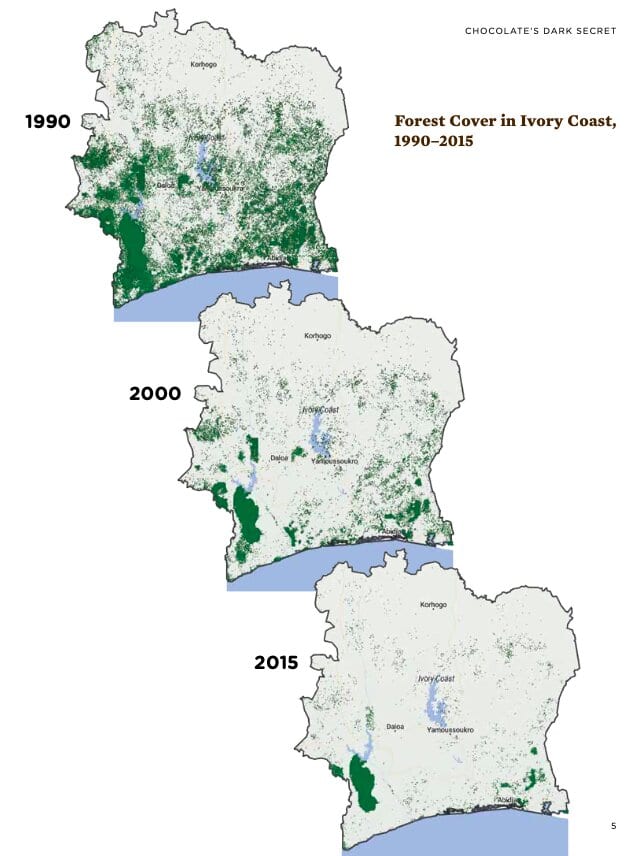 Cocoa farming is also intertwined with human rights abuses and social challenges. According to Etelle Higonnet, Mighty Earth’s legal and campaign director, profits for a chocolate bar for cocoa farmers in Côte d’Ivoire have declined from around 16% to 3.5-6% between the 1980s and today. Because the price of cocoa has fallen so low, most cocoa farmers make less than a dollar a day. Yet, female cocoa farmers make even less: only around 30 cents a day. Moreover, cocoa farming is often associated with child labour, with around two million children estimated to work on cocoa plantations.

Cutting down trees has massive consequences on biodiversity, as many already endangered species lose their habitat as a consequence. In Indonesia, orangutans, rhinos, tigers, and elephants are among the most threatened animals, while in Africa, cocoa-driven deforestation is threatening mainly chimpanzees and elephants.

Of course, one of the best ways to reduce the impact of cocoa farming on the world’s forests is to take action to stop deforestation in the first place and hold companies and governments responsible for it accountable.

In late 2021, the European Union – the world’s largest importer of cocoa, accounting for 60% of global imports – announced plans to ban food and wood imports from areas at risk of deforestation, requiring companies to prove that the products they sell did not contribute to legal and illegal deforestation or forest degradation. The proposed plan came after more than 140 countries pledged to halt and reverse deforestation by 2030 at the COP26 climate summit in Glasgow earlier this month. Combined, these countries represent more than 85% of the world’s forests.

In 2017, the governments of Côte d’Ivoire and Ghana and 35 leading cocoa and chocolate companies joined together in the Cocoa & Forests Initiative (CFI) promoted by the World Cocoa Foundation, pledging to end deforestation and restore forest areas.  Following the launch of the project, Côte d’Ivoire implemented a national satellite system to monitor deforestation and in 2020, it planted almost 10 million trees with the goal to extend forest cover to 20% of the country. Similarly, Ghana restored about 230,000 hectares of forest area in the same year, equivalent to 870 football fields. The cocoa and chocolate companies involved in the CFI have distributed over 10 million forest trees since 2018 and reached 82% (Ghana) and 74% (Côte d’Ivoire) traceability in direct sourcing in 2020.

Other countries have moved in the same direction. In Colombia, for example, the government and cocoa and chocolate companies signed the Cocoa, Forest & Peace Initiative to eliminate cocoa-related deforestation.

Consumers can also do their part by choosing to support sustainable chocolate companies and opt for fair trade-certified products.