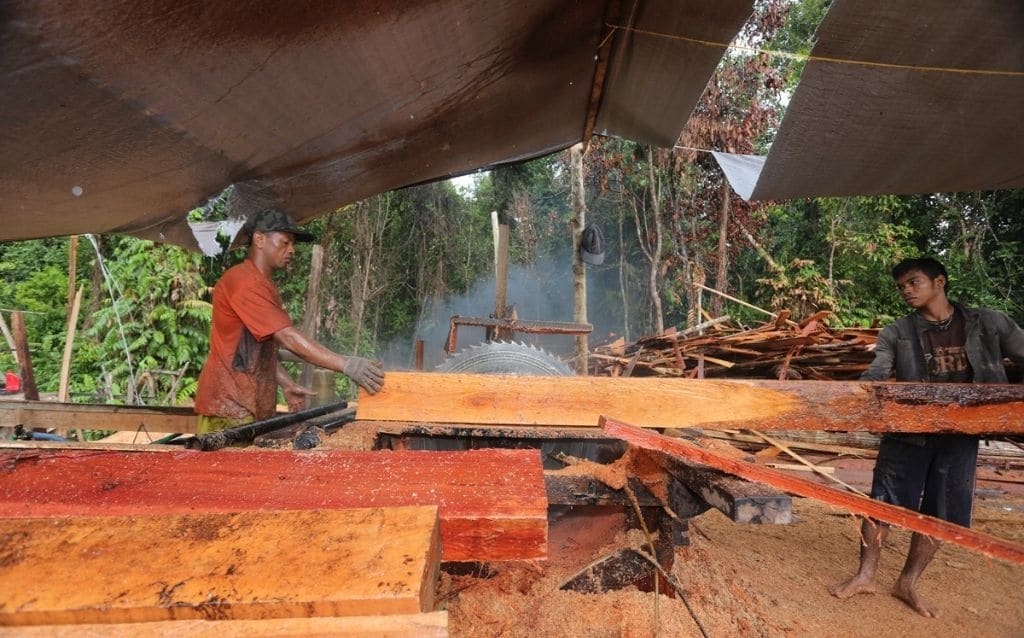 For decades, illegal logging and timber trafficking have destroyed forests across Indonesia, and with them the source of livelihoods of millions of Indigenous peoples.

Now, Indigenous peoples and local communities are fighting back by monitoring illegal logging activities across the country in a bid to protect their forests.

What they’ve found are rampant violations of the government’s timber legality system, or SVLK, which is meant to ensure that all timber is harvested from legal and sustainable sources.

The companies in question all possess timber legality certificates and represent the entire supply chain, from logging to exports.

The monitoring discovered numerous violations of the SVLK system throughout the supply chain.

For starters, the observers found logging companies were cutting down trees outside their legally permitted concessions and tagging the logs with legality certificates that effectively declared the wood came from inside the concessions.

In North Maluku’s Central Halmahera district, for instance, they found logging companies were slapping legal documents from local landowners on illegally logged timber — as if the companies had bought the timber from these locals, when in fact they hadn’t, said PPLH Mangkubumi spokesman Agus Budi Purwanto.

In other cases, companies were paying off locals to do the illegal logging for them.

There were similar violations found further down the production chain, when the timber was shipped off to woodworking shops in the East Java cities of Surabaya and Gresik to be made into furniture and handicrafts. Here, the observers found the shops manipulating records of the wood they had purchased from illegal loggers, making it appear as if it came from certified companies.

In other cases, records from the timber industry were manipulated to look like shipments were coming from multiple companies, in an apparent effort to obscure the origin of the wood.

Even when these woodworking shops were busted for the violations and had their legality certificates revoked, they could continue operating simply by applying for a new certificate from a different government-appointed assessment agency.

From these shops, much of the wood products is exported to countries like China. Yet even at this stage, where official scrutiny is more intense, violations abounded, the observers found.

They recorded 14 exporting companies based in Semarang, Central Java, selling forged legal documents, known as v-legal certificates, to furniture companies that didn’t possess such certificates, so that their products would be eligible for export.

The forged v-legal documents typically sold for 2 million to 8 million rupiah ($140 to $560) per container of wood products destined for export.

Agus said this shows that government monitoring of the legality of timber exports in Indonesia remains weak.

“Document forgery is the most common modus [operandi] by forestry criminals,” he said. “Moreover, exporters easily profit from selling v-legal documents. If this practice continues, it will damage the credibility of the SVLK system, which has been touted at the international level as a system to prevent illegal logging and illegal timber trade.”

Following the monitoring exercise, the observers reported their findings to the authorities. They reported 11 companies to the timber legality verification agencies, seven to law enforcement, two to local forestry agencies, and 14 to the Ministry of Environment and Forestry.

Deden Pramudiana, a campaigner for JPIK, said enforcing the law against these violations is important in the fight against illegal logging and timber trafficking.

“There have to be strict sanctions with a deterrent effect for forestry criminals,” he said.

During the monitoring, observers encountered some challenges, according to Dedek.

For one, the government’s online SIPUHH system, which compiles information on forestry products, can’t be accessed by observers, he said.

“In the past few years, we’ve been pushing for SIPUHH to be opened [to the public],” Dedek said. “But until now independent observers still can’t access it. If we could access it, it would be easier [for us] to do monitoring.”

Dedek said it’s also difficult for observers to access information from the timber certification agencies that issue the SVLK documents to companies up and down the timber production chain.

“When we did research and were looking for data, for instance export data, we asked certification agencies,” he said. “Some [agencies] didn’t disclose the data, which hampered monitoring efforts.”

In some cases, observers were threatened during their work.

“Recently, independent observers in Papua felt threatened after they finished their monitoring and reported their findings to certification agencies,” Dedek said.

Wancino, an observer from the Kaharingan Institute, an NGO, said he and other observers were threatened by alleged gang members when they were monitoring for illegal logging allegedly done by a company in Katingan district, Central Kalimantan province.

“We were blocked by three cars, with 15 thugs [in it]. They threatened to kill us,” he said. “We were held hostage for two hours. They were armed with sharp weapons. But thankfully, they released us.”

Dedek said the scale of the challenges that independent observers face as they continue to monitor the industry is expected to increase due to a new regulation issued by the Ministry of Environment and Forestry this year.

Dedek said this change indicates that independent monitoring is now merely optional, whereas before it was a mandate. This raises concerns that the role of independent observers in the monitoring of the SVLK system will be limited.