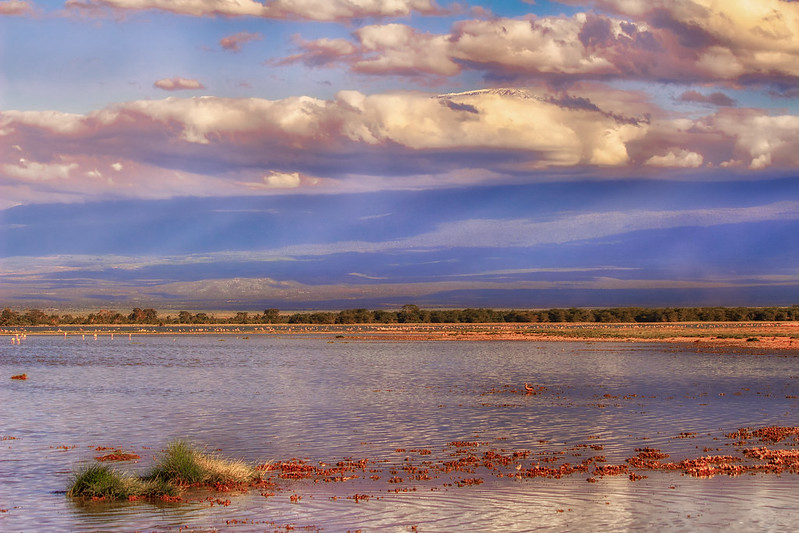 An April 26 ruling against a licence for a commercial farm near Kenya’s Amboseli National Park will help to preserve free movement of both Maasai livestock herders and wildlife. The National Environment Tribunal of Kenya ’s dismissal of an appeal by KiliAvo Fresh Ltd confirms the importance of ecological concerns in determining appropriate land use in the semi-arid region.

The farm’s owners initially applied for a licence in August 2019, but this was denied by the National Environmental Management Authority because it fell in an area zoned for livestock under the Amboseli Ecosystem Management Plan. The plan aims to preserve free movement of both domestic animals and wildlife across the Kimana plain, which has largely avoided the gradual fragmentation of ownership, growing permanent settlement, and agriculture in other areas surrounding Amboseli National Park.

Movement the Lifeblood of Pastoralism

For 60 years and more, a series of changing legal boundaries has fallen across this dryland ecosystem. While the ecological demands of this arid, beautiful territory have remained the same – seasonal availability of grazing and water prompting both wildlife and herders to move freely across it – until recently, the legal framework had increasingly divided the land up, assigning legal title to steadily-smaller plots which individual owners were tempted to sell off to private developers.

In 2013, two thirds of landowners of the former Kimana Tikondo Group Ranch pooled their plots, establishing the Amboseli Landowners Conservancies Association (ALOCA). In concert with the Kenya Wildlife Service and the ministries of environment and tourism and wildlife, ALOCA designed a management plan intended to ensure revenue streams for members, covering lease fees, bursary, livestock breed improvement, and livestock compensation lost to predators.

Kenya has come a long way in mitigating human-wildlife conflicts. Carefully developed strategies have allowed threatened lion populations to make a comeback despite growing human populations and pastoral needs for livestock grazing. Big Life Foundation, a nonprofit organisation focused on preserving wildlife and habitat, works to support local communities through the collaborative protection of wildlife. Advocating for coexistence can be a challenging process, one that will persist into perpetuity, but a meaningful one. Jeremy Goss, a conservation manager at Big Life, emphasised their mission statement: “We see wildlife and domestic livestock as inherently compatible.”

Land use in Amboseli has long accommodated the needs of both livestock and wildlife, whose fates are inextricably linked. For both, mobility is essential – survival depends on constant movement to viable resources. Rangers and herders alike understand how these animals constitute the local economy and Maasai culture. The vast bush of Amboseli may seem undeveloped in the conventional sense–underutilised to the inexperienced eye–but it is this very land that has supported some of the world’s most renown wildlife and the livestock that supports local economies.

ALOCA’s management scheme formally recognised that movement is the lifeblood of pastoralism, helping to avoid overgrazing and allowing the landscape to support livestock herds and wildlife more sustainably while building in the flexibility needed to survive and recover from periodic droughts.

‘Soon, This Area Will Be Covered With Farms’

KiliAvo Fresh Ltd’s project moves in the opposite direction. The 72-hectare (180 acres) farm is situated in the middle of the Kimana wildlife dispersal area; its electrified fencing partially obstructs a wildlife corridor linking Amboseli National Park with Kimana Sanctuary and opening into the Chyulus and Tsavo to the north and east.

The project’s Environmental Impact Assessment raises concerns over the impact of setting up water-intensive commercial agriculture here, as well as the risk of chemicals from fertilisers and pesticides leaching into surrounding areas.

Kenneth Nashuu is a retired warden whose 40 year career with Kenyan Wildlife Service brought him all across Kenya. He predicts serious repercussions for both wildlife and the economic situation of local communities should KiliAvo’s vision succeed. “An insertion like KiliAvo in a critical route point should have never been allowed to happen. There needs to be a stronger management plan in place that trains people so they understand the consequences.”

Kimana is one of several sites across the country where strategies to reduce conflict between growing human populations and their livestock and farms have enjoyed recent success.

Daniel Ole Sambu, head of the Predator Protection Programme at Big Life, helped develop a compensation scheme to attenuate retaliatory predator killings in 2003. Funds from both Big Life-facilitated donations and a local community kitty offer partial compensation for attacks on livestock by lions, hyenas, leopards, and other predators. By offering compensation credit on a sliding scale, the program encourages herders to adopt good husbandry practices, such as fencing and keeping constant watch over livestock. For instance, should the attack occur in a fenced area, the compensation will be greater than if the attack took place in an open pasture.

Since the introduction of the program, fewer predators have been killed in retaliation for livestock casualties. Big Life’s Rangers’ phones used to ring off the hook with people reporting intruding wildlife. Now, there is an average of four or five calls a day across the 647,497 hectare (1.6 million acres) that they oversee.

Speaking to KiliAvo shareholder and manager Jeremiah Saalash on the path leading to the farm’s newly-drilled borehole, an opposing vision quickly becomes clear: “Soon, this area will be covered with farms just like this one. My ancestors farmed in the foothills of Kilimanjaro, and I have made it here.”

The establishment of an enterprise such as KiliAvo may undo years of hard work and catalyse conflicts beyond Amboseli, reintroducing conflicts where people are living and grazing due to the disruption of a critical migration corridor.

Further constraints on grazing from encroachments like KiliAvo could even force locals to return to subsistence poaching.

It is worth noting that there are smallholder farmers growing maize, beans, onions, and other vegetables near natural water sources in ALOCA’s seven conservancies. It’s the location and scale of KiliAvo that raises concerns.

Changes to ecosystems in tandem with conventional human development are inevitable, but this is not to say stewardship should be abandoned. The KiliAvo ruling by the National Environmental Tribunal clarifies which forms of development make ecological sense here in sight of Amboseli.

By obstructing wildlife migration corridors, eliminating critical pastures for local herders, and monopolising scant resources, a farm such as KiliAvo is fundamentally incompatible with the drylands of Kimana.

“Everything is connected here,” Parmuya Ole Timoye, a manager at nearby Amboseli Bush Camp commented.“One person’s actions can affect everyone else.”

This article was originally published on Mongabay, written by Kang-Chun Cheng, and is republished here as part of an editorial partnership with Earth.Org.