Why Marginalised Groups are Disproportionately Affected by Climate Change 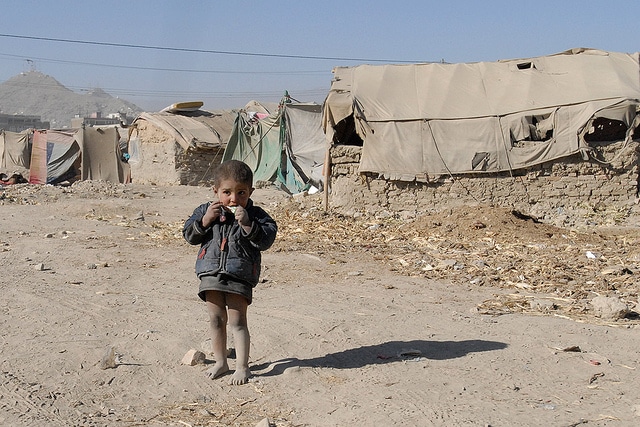 Marginalised groups and minority communities have been hit harder than any other groups by the increasing effects of climate change, particularly those from lower economic countries, people of colour as well as future and younger generations.

Most of us are already well aware of the myriad of impacts climate change has on our society, but few understand the disproportionate nature of such changes. Climate change does not have a uniform impact across the globe: the truth is that many marginalised groups on the planet are hit disproportionately harder. Many of these vulnerable groups already possess weak adaptive capacities to react to these climate changes, thus further exacerbating the adverse effects. There are four salient categories of disparities in climate change impacts: economic, racial, regional, and generational.

In the face of climate change, the poor possess a relatively limited adaptive capacity; most lack the financial capacity to adapt to the changes in lifestyle and living conditions spurred by climate changes. A striking example of this can be observed in Hong Kong, where its infamous subdivided flats, known colloquially as ‘cage homes’, are becoming increasingly greater health risk factors as the city faces higher temperatures in the warm seasons.

Most occupants of Hong Kong’s subdivided flats cannot afford ventilation or air conditioning, thus posing a high risk to public health as the city gets warmer over the years. In fact, just in 2019, the city recorded its warmest year in history. With the most expensive housing market in the world, most of the lower economic class in Hong Kong are forced into unethical living conditions; subdivided flats are incredibly cramped, housing up to six times the number of people they were designed for. Occupants of these small flats have a very limited storage space, making it very difficult to house air conditioning units. What’s more, even in the flats where air conditioning is available, most residents choose not to use it to save on electricity costs.

Consequently, many poor Hong Kong residents end up suffering through the warm temperatures in uncomfortable conditions with poor ventilation, for months at a time. A study found that 50% of flats surveyed in a local neighbourhood had an indoor temperature over 30 degree Celsius, a temperature that can easily lead to dehydration and overheating. Moreover, the University of Hong Kong found that consecutive hot nights bring a 6% higher risk of death in elderly, and residents of subdivided housing suffer disproportionately during hot spells. It has also found that due to financial scarcity, residents of subdivided flats often under-consume energy, yet they are hit disproportionately by the consequences of warming in Hong Kong. As global warming accelerates, the plight of subdivided flat dwellers will only worsen.

In the US, air pollution is distributed unevenly among the different racial groups, with people of colour being hit the hardest. An important ratio to consider when assessing the distribution of adverse impacts of pollution is the ratio of how much pollution one is responsible for relative to how much pollution one is exposed to. Scientists have found that Hispanics and African-Americans breathe in 63% and 56% more pollution than they make respectively. On the other hand, Caucasians are exposed to 17% less air pollution than they make. This means that relative to their contribution to pollution, people of color in the US are disproportionately exposed to pollutants. Across the country, people of colour on average are also exposed to far higher levels of air pollutants (PM2.5), regardless of region or household income. In short, people of colour in the United States are disproportionately impacted by an increasingly polluted climate, both in relative and absolute terms. 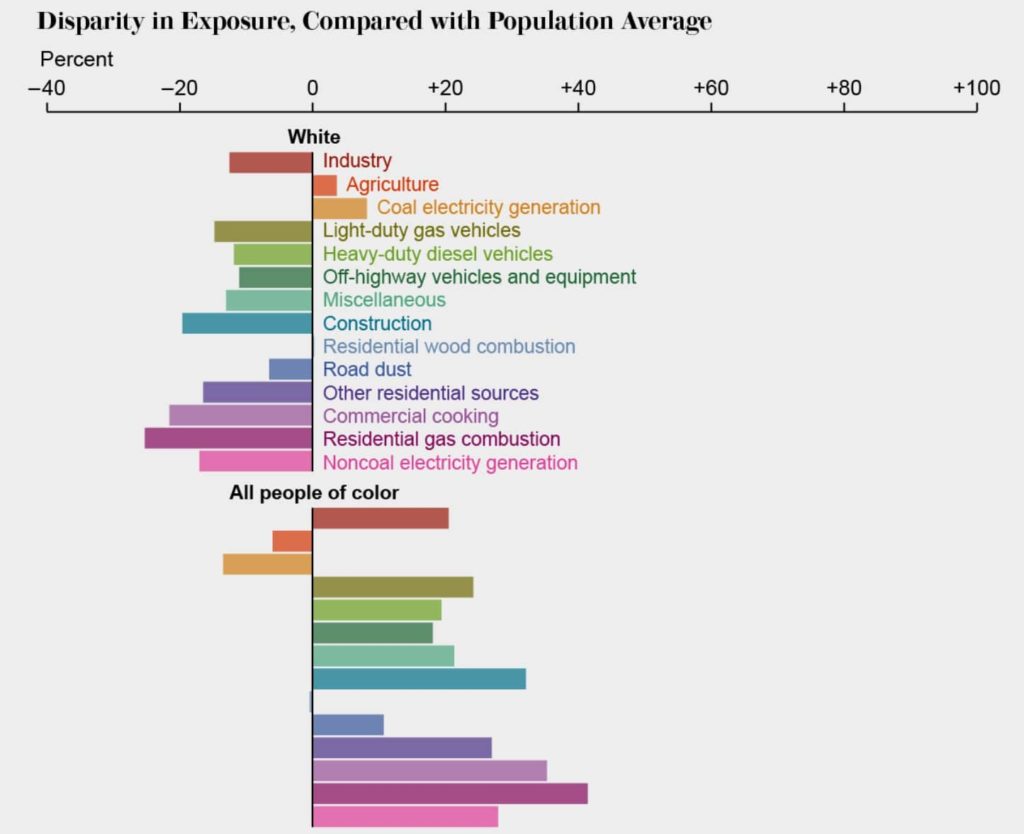 Inequality also exists on the global scale, where there exist large disparities in emissions and climate impacts from country to country.

There is a large asymmetry when it comes to the proportion of CO2 emissions from region to region. For example, North America is home to only 5% of the world’s population, but it emits 18% of the world’s total CO2. Conversely, Africa is home to 16% of the world’s population, but emits only 4% of total CO2. In other words, different continents hold different amounts of responsibility when it comes to climate change, and some regions should bear more of the blame. Moreover, in terms of aggregate income, 86% of global CO2 emissions are emitted by the richest half of countries in the world, whilst the bottom half only emits 14%. This inequality in global emissions renders the issue of international climate change responsibility very delicate and contentious.

In light of this, the countries hit hardest by climate change are coincidentally the countries with less relative responsibility for climate change. For example, the Philippines consists of 1.41% of the total world population, but it only produces 0.35% of total world’s emissions of CO2. Yet, it has been hit disproportionately hard from climate change; every year it suffers numerous casualties and damage from typhoons, floods, and landslides of increasing frequency and intensity. Just last year, the Philippines suffered 67 casualties in the year’s deadliest cyclone, and in 2013 the country was hit by one of the most powerful cyclones ever recorded, displacing over 4.1 million people and causing over 6,300 casualties. Due to the region’s high exposure to natural hazards and its location in the world’s most cyclone-prone area, the Philippines is highly vulnerable to the impacts of climate change, especially rising sea levels, extreme rainfall, and extreme weather events. This increased vulnerability, combined with a weaker adaptive capacity, means that the Philippines will likely experience the consequences of climate change to a far higher degree compared to other countries, and will therefore suffer increasingly disproportionate damage as our climate becomes more and more erratic.

In fact, the Commission on Human Rights of the Philippines announced in 2019 that 47 of the world’s biggest fossil fuel firms — known as the Carbon Majors — could be held morally and legally liable for violating the human rights of Filipinos in the direct effects of climate change. The Commission found that the Carbon Majors played a clear part in anthropogenic climate change and its related impacts. ExxonMobil, Shell, BP, and Chevron all top the Carbon Majors list, and they’re Western companies (British and American). This once again highlights the global asymmetry in climate change effects and responsibility.

As climate change predictions cast ever darker shadows over the future, it is becoming clearer that the burden of climate change will inevitably fall on the younger and future generations. The older generations may live to see the beginnings of serious climate change, but it is the youth that will need to deal with and live amongst the aftermaths of a crippled climate.

Climate distress has become a prevalent anxiety among youth as more people are coming to terms with the threats of global climate crises, natural disasters, and the very real possibility of a catastrophic future. As the grim outlook settles on the youth of today, a sentiment of dispossession and wariness is becoming commonplace. Many studies have shown correlations between climate change indicators and worsening mental health. For example, higher temperatures, humidity, and vapour pressure were associated with a statistically significant increase in mental distress and emergency department visits for mental health concerns. Moreover, youths are at a crucial point in psychological development where they are more vulnerable to the impacts of stressors in the environment. In fact, another study showed that young individuals, as opposed to adults, were more susceptible to environmental-related trauma during natural disasters. In short, youths not only have to bear the weight of a deteriorating climate and the associated increased chances of encountering climate change related stressors, but their pre-existing psychological vulnerability will conceivably lead to a disproportionate mental impact.

Apart from mental health concerns, there is also the issue that youth-heavy populations depend heavily on agriculture, a sector that is highly vulnerable to climate change. Low income countries with high population growth, such as Sierra Leone, Guinea-Bissau, and Mali all rely heavily on agriculture and have high concentrations of young people. As climate change accelerates, climate shocks will become more frequent: droughts, floods, fires, sea-level rises, storms, and pests. The resulting agricultural impacts will be vast: crop yields will fall, livestock will perish, and forest covers will diminish. Many young people in these agriculturally dependent countries will depend on agriculture, and most will remain on farms or rural areas in the decades to come. In short, youth-heavy agricultural countries will be among the hardest hit by climate change. The future climate will fully impact the livelihoods of these youths, and they will be directly bearing the costs of climate change in their lifetimes. 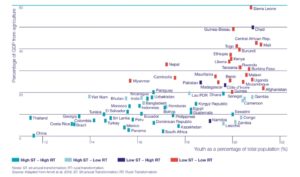 A lot has to be done on the national and global scales to tackle these climate disparities. Fortunately, some changes are starting to emerge. This year, US president Biden has made environmental justice a top priority in public policy by tackling economic and racial disparities as a central part of his climate change plan. He has focused on investing in low-income and minority communities that have traditionally been disproportionately impacted by pollution. Biden signed an executive order that established a council on environmental justice, created an office of health and climate equity, and formed an environmental justice office in the Department of Justice. The order also details that 40% of sustainability investments will be relegated to disadvantaged communities.

Major change is underway on our planet, and the consequences are only beginning to manifest. It might already seem bad for us, but there are marginalised groups and nations that have it far worse. We must quickly wake up to the economic, racial, global, and generational disparities that constitute the disproportionate nature of climate change. The first step towards climate justice involves acknowledging these facts, and taking responsibility. Only then can we start combating the disproportionate effects through major policy overhauls to our industrial and political processes. Our collective climate solution should involve not only preserving the planet and livelihood of the marginalised groups and future generations, but also making a collective shift away from a purely profit-driven course and towards a more sustainable and inclusive direction.

Leonardo is an undergraduate business student studying at HKUST, Bocconi, and USC, and is currently working for Encompass HK. He enjoys photography and philosophy, and is passionate about climate affairs. In his future, he is looking to use business as a force for social and planetary change. 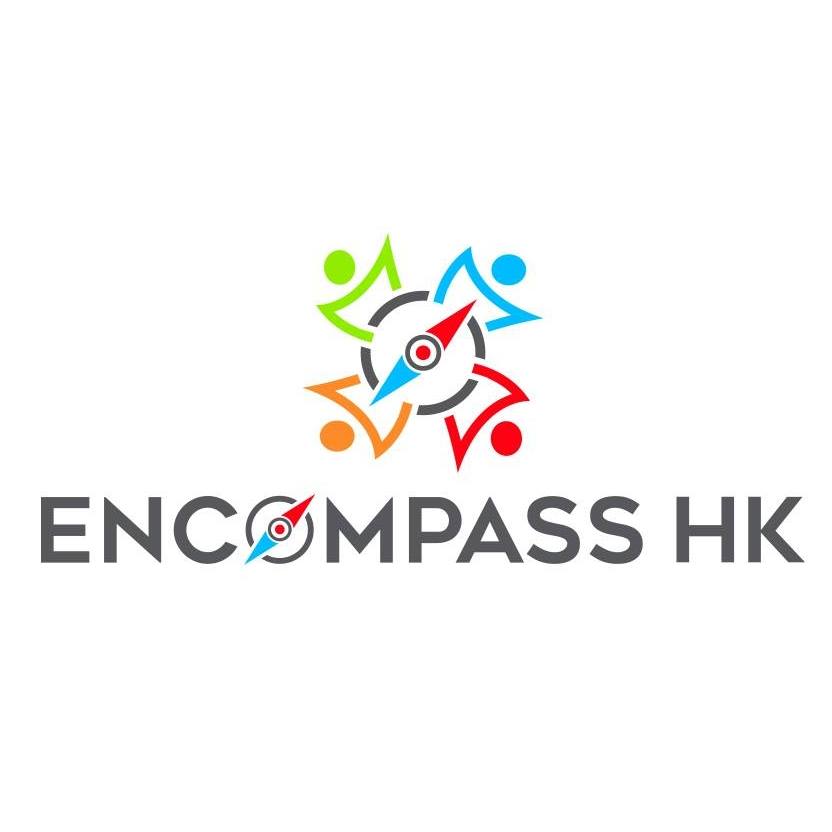 Encompass HK is a HK-based social enterprise that advocates for the Sustainable Development Goals (SDGs) through training and consultancy services to educate and support organisations to be more diversified and inclusive. The enterprise serves the community by contributing to social causes and Non-Governmental Organisations, as well as working with them through collaborative models. Encompass HK has hosted a TEDxEncompass HK as part of the Countdown climate change movement in 2020, and our other climate programs include Climate Change and Pandemic, Climate Change and Coffee, Climate Communication, Eco-anxiety and others.