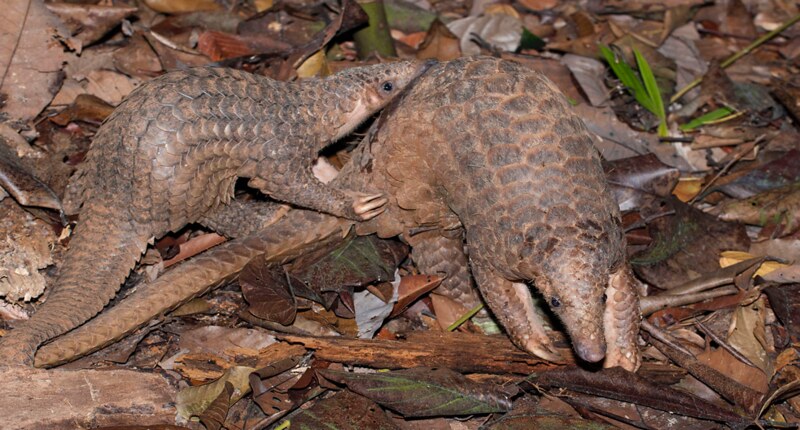 When Singaporean customs officials opened a shipping container en route to Vietnam from Nigeria on April 3, 2019, they found piles of canvas sacks stuffed full of dusty, dried flakes. Packed along with nearly 180 kilograms of carved elephant ivory, the flakes from Nigeria turned out to be pangolin scales — 12.9 metric tons of them. It was the largest seizure of pangolin scales ever recorded, gathered by killing as many as 36,000 of the small forest-dwelling mammals. Then, just five days later, they found another container. This time, there were 12.7 metric tons of scales inside, labeled “cassia seeds” and also bound for Vietnam. Like the previous shipment, its origin was Nigeria. Experts say the two seizures provided a window into a trend that’s emerged in recent years. For decades, Africa’s ivory and illegal wildlife trade was clustered in East African countries like Kenya and Tanzania. But now, the locus of smuggling has shifted west, to Nigeria.

“Nigeria is well connected with other countries in the region, but also has good transportation networks with Asian markets as well,” said Shruti Suresh, senior wildlife campaigner with the Environmental Investigation Agency (EIA). “Combine that with a toxic combination of weak law enforcement and corruption, not only in Nigeria, but more broadly in the region, and what we’re stuck with now is that Nigeria has become the world’s largest hub for export of ivory and pangolin scales leaving African shores for Asian markets.”

According to a December 2020 report from the EIA, an analysis of ivory seizure data reveals the recent shift. Between 1998 and 2014, the top two countries associated with ivory seizures were Tanzania and Kenya, at 87.1 and 59.4 metric tons respectively. But between 2014 and 2018, Nigeria and the Democratic Republic of Congo (DRC) climbed to the top of the list, at 30.5 and 21 metric tons.

In that same period, Nigeria was connected to 167.6 metric tons of pangolin scale seizures — more than four times the DRC.

According to researchers, increased buy-in among senior political officials in Tanzania and Kenya has strengthened efforts by law enforcement to disrupt the wildlife trade there, forcing smugglers to look for easier ports to use when arranging shipments.

“As you’re seeing more enforcement in East Africa — and there is a heavy focus over there at this point on enforcement and stepping up controls at ports along with anti-poaching work — I think the shift is natural to go to locations where you’re seeing less enforcement,” said Julia Viollaz, wildlife crime research officer at the United Nations Office on Drugs and Crime (UNODC).

The EIA report points to corruption among port officials as one of the reasons why Nigeria is such an attractive destination for smugglers. In 2019, Nigeria was ranked at 146 out of 180 countries in Transparency International’s Corruption Perceptions Index. Shipping agents were said to be charging premiums per ton for illegal wildlife product exports, paying higher-ranking officials up the chain along with others involved in inspection and border control measures.

Along with corruption, Viollaz says capacity limitations at ports along with low political willpower to disrupt the trade are to blame for Nigeria’s emergence as a crucial transit hub.

“They have other priorities, the collection of duties and a focus more on imports than exports,” she told Mongabay. “The reality is, why would you focus on the exports going out of your country when the imports are what you can tax? In some ways it’s a question of whether the agencies that have the mandate don’t necessarily have the ability to do the work.”

Ivory and pangolin scales shipped from Nigeria are sent to waypoints — often Malaysia — before being routed onward to their destination ports in East Asia. In recent years, officials in China, Vietnam, Hong Kong, and a number of other nearby countries have made large seizures of ivory and pangolin scales that originated in Nigeria.

While some of the products are sourced from inside Nigeria itself, most are brought from neighbouring countries like Cameroon, the DRC and Gabon. The illegal wildlife trade has a well-established supply chain in the region, with mid-level traders contracting local hunters across the region to kill and gather the animals. The ivory and pangolin scales are then sold on to bigger traders who have relationships with customs officials in Nigeria and abroad.

According to Mark Ofua, a veterinarian and conservationist based in Lagos who has studied the trade, the larger traders tend to be of East Asian descent.

“If I talk with the middle men and the hunters, and ask them who are the people who the animals are going to, there is one word they tell you: the Chinese,” he said.

An undercover EIA investigation that began in Mozambique illustrated the shift, showing how a smuggling ring run by Chinese nationals moved its operations across the continent to Nigeria by 2016. Evidence gathered by the EIA and law enforcement agencies in the region led to two members of the ring being arrested and sentenced to prison terms in China.

“They were arrested primarily because of cooperation between China and other countries in Africa, including Tanzania and Nigeria,” Suresh said. “It was useful to see that level of engagement and law enforcement collaboration across continents. We need to see more of that if we’re going to turn the tide against wildlife crime.”

But according to Orji Sunday, a Lagos-based journalist who has investigated the wildlife trade for Mongabay, the involvement of high-ranking Nigerian officials will likely complicate efforts to shut it down.

“When sources opened up to me in confidence, they were mentioning the names of very, very big politicians in Nigeria,” he said. “These are the kind of politicians where it would take a miracle to put them in jail. They’ve got power and influence even above the courts.”

The emergence of Nigeria as a waypoint for illegal wildlife products is a bad development for elephants and pangolins in the region, which have seen their populations decline in Central and West Africa. According to the EIA report, demand for the “pink ivory” harvested from forest elephants has also risen in China.

Since 2006, more than 90% of forest elephant ivory seized around the world has been genetically traced either to an area known as the Tri-National-Dja-Odzala-Minkébé (TRIDOM), which spans the border region between Cameroon, the Republic of Congo, and Gabon, or from the Dzanga Sangha Reserve in the Central African Republic.

Sunday said part of the problem is that the high prices that pangolin scales and ivory fetch from middle men makes the trade attractive to rural hunters, who tend to be poor and cut off from other economic opportunities.

“If you’re talking to them and say, why don’t you stop, we will need pangolins in the future for biodiversity, they will just ask you one simple question,” he said. “If I stop trading pangolin scales are you going to grant me a job? Are you going to feed my family?”

Despite the challenges of poverty and corruption in Nigeria, Suresh said Kenya and Tanzania are examples of the impact that buy-in from senior officials can have on law enforcement efforts.

“We saw that this led to fairly quick legislative change, with specialised courts and prosecutor units being set up to address wildlife trafficking criminal cases,” she said. “We saw task forces that brought multiple agencies together to launch a comprehensive targeted attack on organised crime groups. And all of this happened in a fairly short period of time. So it is possible.”