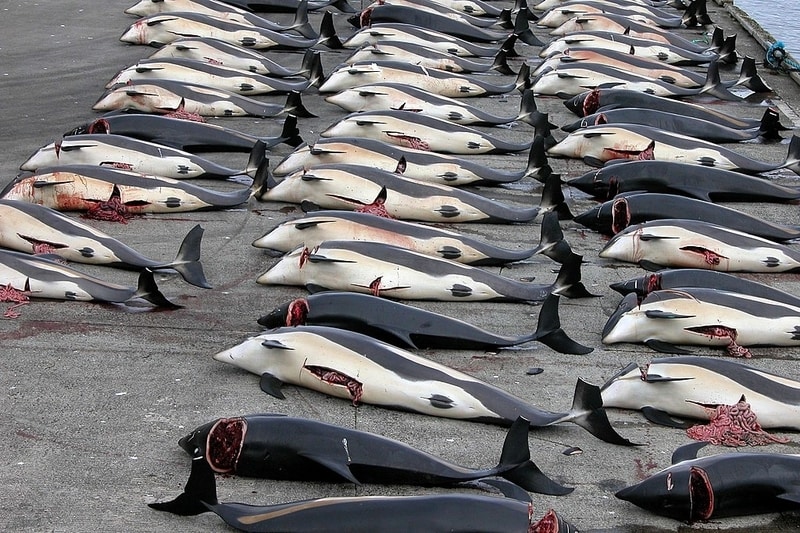 Four hundred and eighty-one. That’s how many minke whales Norway has killed so far this year, according to new data released by the country’s Fishermen’s Sales Organization, or Råfisklaget. That’s 52 more than all of last year, and 76 more than the two years before that. What’s more, this year’s whaling season in Norway has yet to end, so additional whales may still be slaughtered. Overall, this whaling season is the “deadliest in years,” according to the Animal Welfare Institute (AWI), a Washington, D.C.-based NGO.

“The current increase in numbers shows how desperately Norway is clinging to its whaling activities,” Fabienne McLellan, co-director of international relations at Swiss NGO OceanCare, told Mongabay in an email. “It’s just cynical to classify the whaling industry, which is artificially kept alive through subsidies, to be of systemic importance during the COVID-19 crisis.”

In 1982, the International Whaling Commission (IWC) placed a global moratorium on commercial whaling activities, but Norway formally objected to this ruling. Eleven years later, the Nordic country resumed commercial whaling, and since 1993 has hunted more than 14,000 minke whales (Balaenoptera acutorostrata).

During their migration in the North Atlantic Ocean, male and female minke whales tend to segregate, with females traveling further north along the Norwegian coast. As a result, about 70% of whales killed in the Norwegian hunts are females, and pregnant ones at that, McLellan says.

“Pregnant females are slower and accordingly also easier to kill,” she said. “Standing on a whaling vessel that is constantly moving, it is difficult to distinguish whether the whale is pregnant or not.

“Also it is to be assumed that the females swim closer to the coast for energy and security reasons and are therefore caught more easily,” she added.

Targeting pregnant females could impact genetic diversity and population growth, says Kate O’Connell, marine animal consultant at AWI. “[T]he cumulative effects of this over the years is of concern,” she told Mongabay.

Animal welfare advocates also say that whaling is cruel. The whalers will strike a moving whale with a harpoon, which is meant to instantly kill them. But in many instances, it takes a long time for the whales to die, according to a report.

“[T]he government opted to weaken whaling regulations yet again, by requiring that only one person on board a whaling vessel would need to have whaling experience, and even then, only have participated in a whale hunt once in the last six years,” she said. “This poses a significant problem for the welfare of the whales targeted, as less experienced harpooners have been shown to have higher time to death rates.”

This year’s higher kill rate may be due, in part, to favorable weather during the whaling season, as well as the two extra boats used in this year’s hunts, according to O’Connell.

“Only ten vessels hunted last year, and the 2019 kill total of 429 was one of the lowest in a decade,” she said. “Given that twelve boats have hunted this year and the kill rate is higher appears to indicate that the industry is not yet in its death throes.”

It might also have to do with demand. Representatives from the whaling industry say that sales are up this year, possibly due to Norwegians wanting to buy local foods during the COVID-19 pandemic, and choosing to travel within Norway instead of going abroad. Øyvind Andre Haram of Norsk Hval, an organization that promotes the Norwegian whaling industry, likens current whale meat consumption in Norway to the “old days.”

“This year we see for the first time that the arrows point in the right direction, and it is very gratifying,” Haram told national media company NRK in Norwegian.

“I have worked with this for a six-year period, and have never experienced as much interest as this year,” he added. “The producers have … not been able to get enough meat into the shops.”

Per Rolandsen, a sales consultant at Norges Råfisklag, a Norwegian fishing association, told NRK that the whaling industry hopes to kill more than 500 whales this year.

While the pandemic may be driving up local whale meat sales, a 2019 survey, commissioned by Oceancare, AWI and other NGOs, suggests that whale meat is falling out of favor with Norwegians. It found that only 4% of polled Norwegians admitted to frequently consuming whale, while two-thirds of the participants said they consumed whale a “long time ago” or had never eaten it at all.

“The Nordic country is financing a range of projects aimed at boosting whale product sales in the domestic market,” McLellan said. “For example, the government supports the development of dietary supplements, alternative pharmaceuticals, and cosmetic products from whale oil.”

Whale meat is also being sold as “hipster food” at music festivals and trendy restaurants, served on cruise ships, and even being used as animal feed at fur farms, she added.

Norway also exports whale meat and products to Japan, Iceland, and Denmark’s Faroe Islands, despite a CITES regulation that bans the commercial trade of whale products.

“One whale meat company, Myklebust Hvalprodukter, has been relatively successful in finding a market in Japan, going so far as to open a branch there,” O’Connell said. “Last year it shipped some 200 metric tons of whale products to Japan.”

Japan and the Faroe Islands have continued whaling, while Iceland’s industry appears to have ceased, at least for the moment.

McLellan says she believes that the IWC should formally address Norway’s commercial whaling activities, which it hasn’t done since 2001, and that member states of the European Union need to place pressure on Norway for commercially whaling in European waters. She also says that tourists can play a role by avoiding consuming whale meat when visiting whaling nations, and choosing to support whale-watching activities.

“While Iceland and Japan have been subject to diplomatic pressures in the past, Norway has so far been largely spared from criticism, despite being the whaling nation number one, carrying out whaling activities in European waters,” McLellan said.

“Norway should acknowledge that whaling is no longer a necessary industry and stop issuing quotas in defiance of the IWC’s moratorium,” she added.