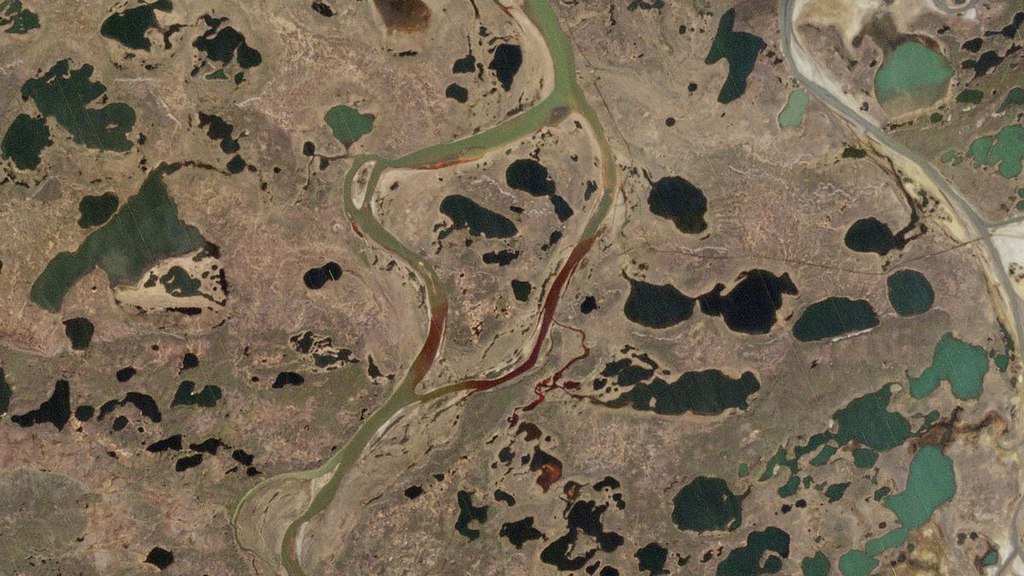 Russia has announced a national-level state of emergency after 21 000 tons of diesel fuel spilled from a reservoir that collapsed in late May. The spill has polluted large stretches of Arctic rivers- colouring tundra waterways bright red- and was caused by melting permafrost, according to Russian officials. While Russia has ordered a review of infrastructure in vulnerable zones, this oil spill incident highlights the danger of the climate crisis for Russia as areas locked by permafrost for centuries thaw amid rising temperatures.

The spill happened when a fuel tank at a power plant near the city of Norilsk collapsed. A subsidiary of Norilsk Nickel, the world’s leading nickel and palladium producer, owns the plant. According to reports, a criminal case has been launched, as there was reportedly a two-day delay in informing the Moscow authorities about the spill. Minister for Emergencies in Russia Yevgeny Zinichev claims that the plant spent two days trying to contain the oil spill before alerting his ministry, however Norilsk Nickel says that the incident was reported in a ‘timely and proper’ way.

The oil leaked at least 12km from the accident site, turning stretches of the Ambarnaya River deep red and has overall contaminated a 350 sq km area.The spill also polluted 180 000 sq metres of land before reaching the river, regional prosecutors said.

The Ambarnaya River feeds into Lake Pyasino, a major body of water and the source of the Pyasina River that is extremely important to the entire Taimyr peninsula. Satellite images released by the European Space Agency and Russia’s Roscosmos show that a large spot of reddish fuel travelled over 20km towards the lake from the spill site.

President Vladimir Putin told Norilsk Nickel chief Vladimir Potanin that he expects the company to pay for clean-up operations. Potanin estimates that the operations will cost about US$146 million, on top of any fines, and says, “We will spend whatever is needed. We will return the ecosystem back to normal.” The country’s technical safety watchdog says that since 2016, it has been unable to check the condition of the reservoir, because the company said it was under repairs.

Floating barriers erected on the river by responders are unable to stop most of the pollution, which can quickly dissolve or sink, according to Russia’s fisheries agency.

The state of emergency means that extra forces are going to the area to assist with the clean-up operation, however environmental groups say that the scale of the spill and geography of the river mean it will be difficult to clean up.

The area has been affected by decades of pollution from metals production and other activities in Norilsk, which is Russia’s most polluted city.

Environmentalists say that the spill is the worst such accident ever in the Arctic region and Alexei Knizhnikv, an expert from the World Wildlife Fund, says that the accident is believed to be the second largest in modern Russian history in terms of volume.

He added that despite melting permafrost, the incident could have been avoided if the company followed the rules, such as erecting a barrier around its fuel reservoir to contain spillage.

Russia is warming 2.5 times faster than the world average. 65% of the country is covered by permafrost and the environment ministry warned in 2018 that the melting of permafrost threatens pipes and structures, as well as buried toxic waste, which can seep into waterways. This makes it all the more important that Russia follows through with its climate action targets. In September 2019, the nation formally ratified the Paris Agreement, saying that climate change could endanger key sectors like agriculture as well as the ‘safety of people living in areas with permafrost’ and has pledged to reduce emissions to 25 to 30% below 1990 levels by 2030.

Update, June 29: Norilsk Nickel has said that it has suspended workers at a metals plant who were responsible for pumping wastewater into nearby Arctic tundra. The workers dumped about 6 000 cubic metres of liquid used to process minerals at the facility. The plant says that it is impossible to determine how far the wastewater has dispersed.

Update July 31: Norilsk Nickel has been fined $2.1bn over the spill.