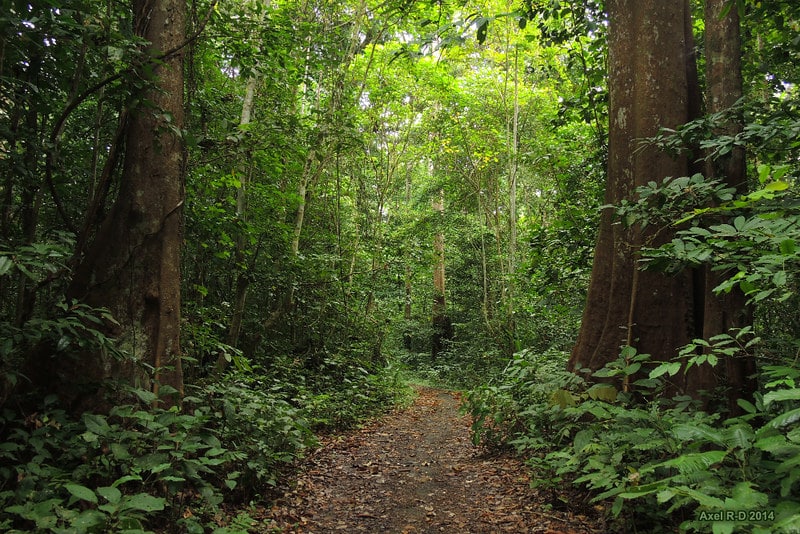 “Birds might fall as they’re not strong since there’s no more trees standing.” This is how Jemris Nikolas characterises the response of many in Sorong, a district in Indonesia’s easternmost region of Papua, to the deforestation unfolding in their area.

Jemris is an environmental activist based in Papua, home to the last great expanse of rainforest in Southeast Asia. Indonesia’s commodities boom of recent decades — from palm oil to coal to pulpwood —razed much of the forests on the western islands of Sumatra and Borneo. Now, those same industries are moving into Papua, where authorities have issued licenses that could result in the clearing of an area the size of Sydney.

That’s the finding from a new report by a coalition of 11 NGOs in Indonesia, which shows that most of the 1.1 million hectares (2.7 million acres) of natural forest that the government has authorised for clearing will be converted into oil palm plantations.

These licenses are known as forest conversion permits, which are required by law to allow plantations and infrastructure projects to be established in forest areas.

Dedy Sukmara, a researcher at the environmental NGO Auriga, a member of the coalition, said the issuance of these permits effectively legitimises large-scale forest clearing.

“According to the law, this is legal deforestation,” he said.

And this could spell disaster for the region’s wildlife and plants. Papua’s forests are among the most biodiverse on Earth, home to at least 20,000 plant species, 602 birds, 125 mammals and 223 reptiles.

Under new regulations that set a tighter deadline for when license holders must start cultivating on their land, companies would be compelled to clear their concessions sooner or face punishment, Dedy said.

“The recipients of the forest conversion licenses [are perceived to] not perform when they don’t utilise [their permits],” he said. “This shows the potential of a spike in deforestation in Papua in the next few years considering that there are many natural forests in the region that have been released [for plantations] and these [forests] are very threatened.”

In response to the NGOs’ report, the Ministry of Environment and Forestry released its own data showing there are at least 1.26 million hectares (3.1 million acres) of natural forests remaining in the areas that have already been earmarked for plantations as of January 2021.

These forests in Papua have remained largely intact, with only 2,645 hectares (6,536 acres) of deforestation identified by the ministry by January 2021.

The ministry said it monitors this trend as part of wider efforts following up on a 2018 government moratorium on issuing new permits for oil palm plantations. The moratorium was imposed to improve the sustainability of the industry, and also calls for a review of existing permits.

The ministry said the monitoring by the central government is especially important because there have been no recommendations from local governments to revoke forest conversion permits in areas that are still forested.

“The ministry continues to monitor deforestation, whether through satellite-based monitoring or through field observation in certain levels, on the 1.26 million hectares of natural forests that are still spread in the areas zoned to be converted into oil palm plantations [in Papua],” it said in a press statement.

Mufthi Fathul Barri, a researcher with Forest Watch Indonesia (FWI), another member of the NGO coalition, said monitoring alone is not enough to make sure the natural forests in the areas already licensed remain intact.

“It seems like the [monitoring] efforts by the ministry are merely to prevent deforestation from happening in the current administration, not to protect the remaining natural forests,” he told Mongabay. “These [efforts] will go to waste if, in the end, areas that have been licensed will be converted” to oil palm plantations.

In addition to a freeze on new oil palm permits and review of existing permits, the government should enforcing the law on violating companies and recognise the rights of local communities and Indigenous peoples, Mufthi said. He cited the Tanah Merah mega plantation project in the Boven Digoel district in Papua, a deforestation hotspot, as a litmus test for the ministry and the oil palm plantation moratorium.

The Tanah Merah site, earmarked mostly for oil palm, could on its own lead to the clearing of up to 280,000 hectares (692,000 acres) of rainforest — an area nearly twice the size of New York City.

But the multibillion-dollar project has been mired in a litany of controversies, with a 2018 investigation by Mongabay and The Gecko Project showing how permits were issued by an official in jail on corruption charges; Indigenous peoples were coerced into relinquishing the rights to their ancestral lands; and the true identities of the individuals behind the project were concealed behind fake nominees and shell companies in tax havens.

In 2019, allegations emerged that fake licenses had been issued to some of the operators involved in the project.

Officials from the Papua provincial investment agency also alleged that permits for the seven concessions at the Tanah Merah site were falsified at a critical stage of the licensing process. While the permits bore the signature of the former head of the agency, he has reported in writing that it was forged. The allegations were uncovered in a follow-up investigation by Mongabay and The Gecko Project.

In 2016, Environment and Forestry Minister Siti Nurbaya Bakar referred to the project, though not by name, when discussing the progress of the ministry’s review of licenses in Papua.

“Several of our findings indicate that in areas where forest release permits have been granted since 2011 in Papua, nothing has been done there and they are simply land banks,” she said in a statement on the ministry’s website. “We even found that some of these permits have been traded. For example, seven forest release permits for palm oil development in that province, amounting to almost 300,000 hectares [741,000 acres], were sold to a number of business groups in Malaysia.”

Siti added that these trades involved 20% of the areas that should have been allocated for local communities.

Given the number of investigations already done into the project, and with the minister’s own acknowledgement of its maladministration, Mufthi said there’s no reason for the ministry to not take further action.

“The case has been ongoing since 2014, and if the ministry is being proactive, then the case shouldn’t lie dormant like this,” he said. “It’s clear that the permits issued in Papua were used as land banking, and there’s a regulation that bans people from selling permits that have been issued. And yet, trading of shares continue to happen, just like the Tanah Merah case.”

To follow up on the Tanah Merah case and address the loopholes that have allowed it to happen in the first place, the ministry doesn’t have to wait for recommendations from local governments, Mufthi said.

“Because not all officials in Papua understand these processes,” he said. “So not all [actions] have to be based on local governments’ recommendations.”

To protect forests for which conversion permits have already been issued after the moratorium expires at the end of this year, the government should impose a blanket ban on the clearance of all natural forests, regardless of whether permits have been issued or not, said Dedy from Auriga.

The government in 2011 did issue a moratorium on clearing primary forests and peatlands, which was made permanent in 2019. But it doesn’t cover secondary forests, defines as those where there has been some degree of human activity, but which also host a large proportion of Indonesia’s remaining natural forests, with high levels of biodiversity and tree cover.

The forestry ministry said it had identified natural forests with high conservation value (HCV) and high carbon stock (HCS) in Papua in an effort to protect them. According to the ministry, these areas may be classified as conservation forests in the future, which would protect them from deforestation.

Belinda Arunarwati Margono, the ministry’s director of forest resource monitoring, acknowledged that there are secondary forests that are nearly as pristine as primary forests. But she said it’s not possible, due to “technical difficulties,” to include them in the moratorium.