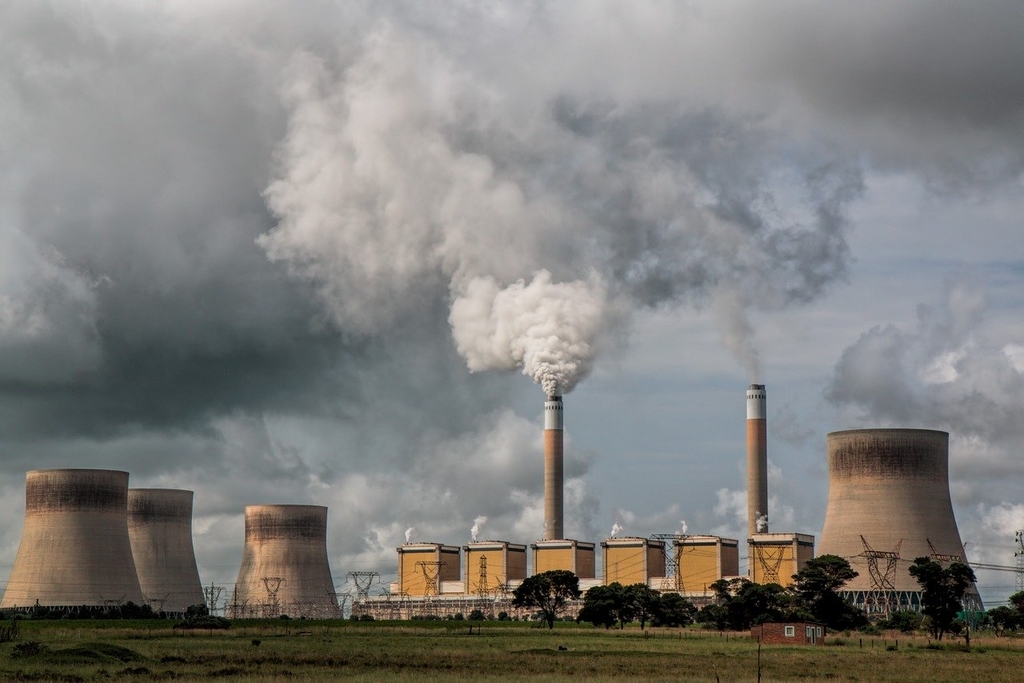 Social media has been abuzz with images of clear skies around the world as a result of lowered emissions due to coronavirus shutdown measures. However, the World Meteorological Organization (WMO) has warned against treating recent COVID-19-related reductions in greenhouse gas emissions as a sign of improving air quality, calling instead for long-term climate commitments. Will environmental concerns be high on the agenda as countries reopen their economies?

As COVID-19 continues to spread around the world, countries have adopted isolation policies in an attempt to contain the rate of infection and to ‘flatten the curve’. In the midst of all this, an unexpected brightspot for the environment has emerged- a reduction of greenhouse gas emissions. According to observational data from NASA, there was a significant reduction in nitrogen dioxide (NO2) levels during the lockdown in China in early-January to mid-February. Meanwhile in Italy, the European Union’s Copernicus Atmospheric Monitoring Service (CAMS) also reported a gradual reduction trend of NO2 levels by about 10% per week between late-January to mid-March.

However, the WMO says that it is too early to judge whether the ‘localised improvements in air quality’ would contribute to any long-term climate change, stating that recorded carbon dioxide (CO2) levels at key observation stations have so far been higher compared to last year. 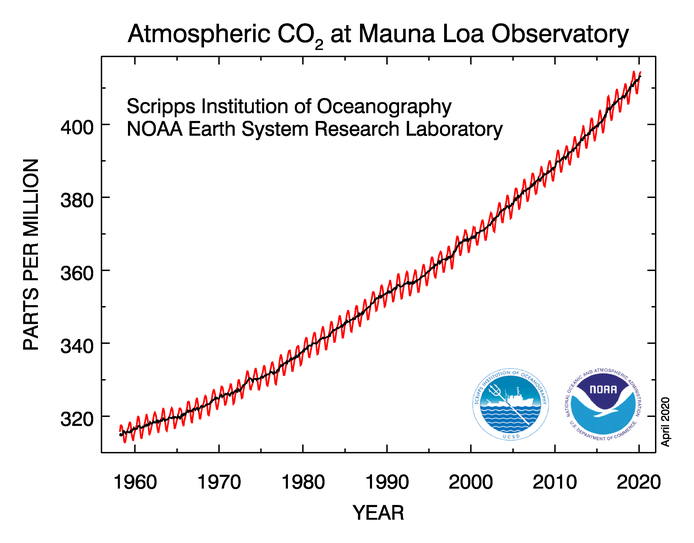 As countries look to a post-COVID-19 world, the UN’s atmospheric monitoring body says the drop in emissions will ultimately have no impact unless there is sustained climate action. The WMO’s Secretary-General, Petteri Taalas, has called on governments to support long-term environmental and climate-friendly policies in their economic stimulus packages. “It would be irresponsible to downplay the enormous global health challenges and loss of life as a result of the COVID-19 pandemic,” says Taalas,

“Past experience suggests that emission declines during economic crises are followed by a rapid upsurge. We need to change that trajectory.”

The United Nations Environmental Programme (UNEP) executive director, Inger Andersen has echoed this sentiment. In an interview with the Guardian, Andersen says COVID-19 is a clear ‘warning shot’ against humanity. She explains the loss of biodiversity caused by the climate crisis has driven wild animals closer to human populations and with 75% of all emerging infectious diseases coming from wildlife, continued disregard for habitat and biodiversity loss will only increase our exposure to deadly diseases.

“We are intimately interconnected with nature, whether we like it or not. If we don’t take care of nature, we can’t take care of ourselves. And as we hurtle towards a population of 10 billion people on this planet, we need to go into this future armed with nature as our strongest ally.” says Andersen.

Looking at Past Crises

This is not the first time economic slowdown has brought about lowered emissions. According to a study in the scientific journal Nature Climate Change, during the 2008-09 global financial crisis that spurred a recession, CO2 emissions dropped by 1.4% in 2009. The following year, however, as countries began reopening their economies, emissions rose by 5.4%, completely offsetting any reductions seen during the recession. What was alarming about the rate of CO2 emissions was not just the increased volume, but also how quickly emission rates hit pre-recession trends. 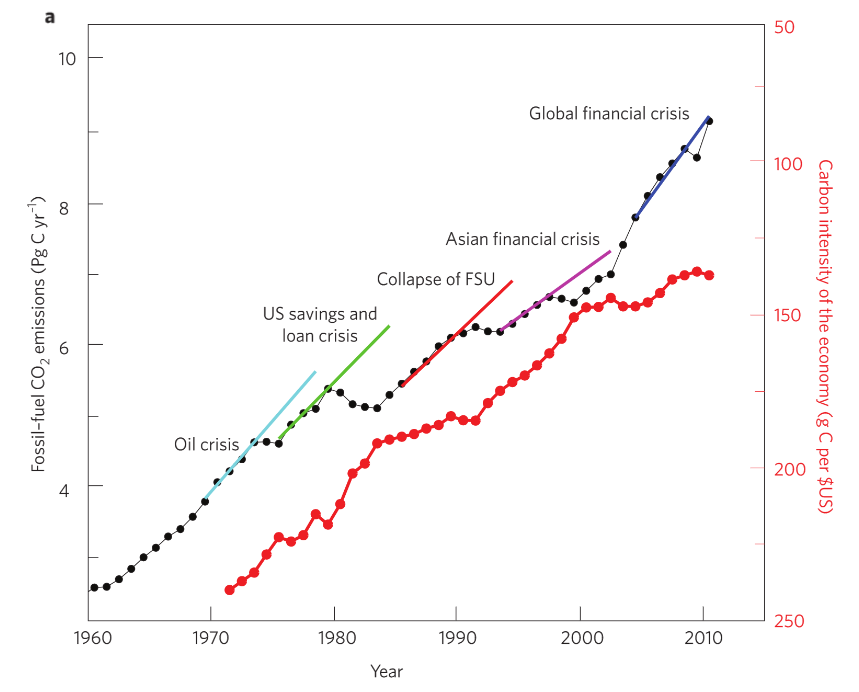 Troublingly we are likely to see this same trend from countries such as China, ground-zero of the pandemic. In an analysis by Carbon Brief, a UK-based climate change non-profit that has been tracking the emissions change in China since the outbreak began, findings suggest that upcoming stimulus policies by Beijing are more than likely to far exceed any short-term reductions in energy and emissions- echoing trends seen following the 2008 global crisis and its domestic economic downturn in 2015.

Fatih Birol, the Executive Director of the International Energy Agency (IEA), sees the coming economic recovery process as a chance for governments to create jobs and improve infrastructures that allow for a transition to cleaner energy. Birol highlights five areas where governments can act, including placing clean energy jobs at the centre of stimulus packages, developing and scaling up the next generation of energy technologies to reach net-zero emission targets, and increasing private sector investment into participating in clean energy industries.

According to the IEA, governments contribute directly and indirectly to around 70% of global energy investments. Birol argues their leadership is needed to spearhead the transition to clean energy.

“We have two curves we need to quickly bend onto downward trajectories. The curve of coronavirus infections, and the curve of global emissions.” says Birol. “Neither will be easy. But through smart, timely action and cooperation, governments can ensure we achieve both.”

Last year, the International Renewable Energy Agency (IRENA) published a report stating that renewable energies have become the lowest-cost source of power generation in most parts of the world– with solar and wind technologies leading the way. Francesco La Camera, Director-General of IRENA, says the clean energy sector, which in 2018 employed 11 million people worldwide, can be pivotal in helping rebuild economies. “Governments can turn to a renewables-based energy transition to bring a range of solutions at this difficult moment. Many renewable technologies can be ramped up relatively quickly, helping to revive industries and create new jobs.” he says.

COVID-19 presents an opportunity for humanity to make a tangible difference in the fight against the climate crisis and lower emissions significantly. Ultimately, as the impacts of the climate crisis become more pertinent, future crises will become more likely. As renewable energy infrastructure becomes ever cheaper to build, the time to transition to clean energy alternatives and commit to combating climate change in the long-term is now. All that’s left is for governments to show the political will to implement such ideas.