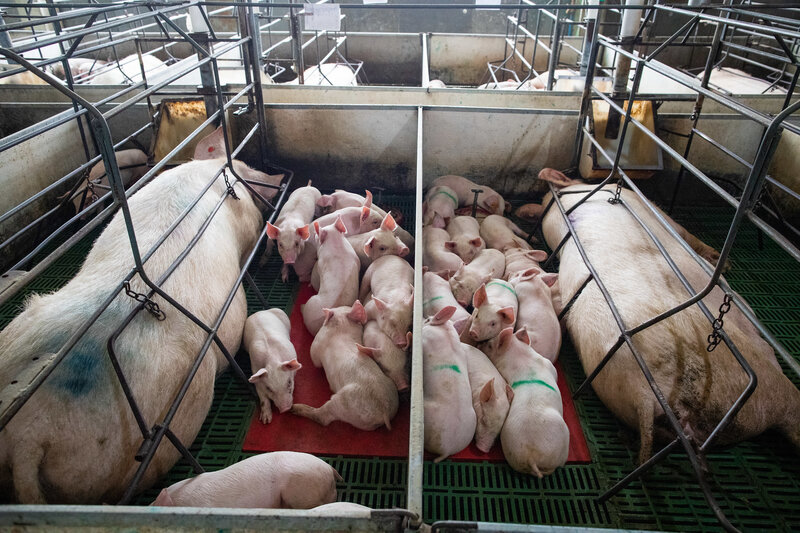 In recent months, meatpacking companies in different parts of the world have been associated with large clusters of COVID-19 infections. The Tönnies meat-processing plant in North Rhine-Westphalia, Germany, was temporarily closed, and U.S.-based pork processor Smithfield became a major focus of the disease in South Dakota, one of the country’s least-populated states. In Brazil, complaints abound about COVID-19 at slaughterhouses: 20% of the industry’s workers have been infected, according to the National Confederation of Workers in Food and Related-Industries (CNTA). It started raising questions about the extent to which pig farming and virus outbreaks were interrelated.

These outbreaks, along with China’s global leadership as a pork producer, caught the attention of three researchers who started looking into the matter: Larissa Mies Bombardi, a geography professor at the University of São Paulo (USP), German pharmacist Immo Fiebrig, and Pablo Nepomuceno, a technician at USP’s Laboratory of Remote Sensing and Geoprocessing.

In two papers, they show the spatial correlation between increasing numbers of COVID-19 virus outbreaks and intensive pig farming in Brazil, the U.S. and Germany. They also put forward a hypothesis, still unproven, that the current agriculture model, specifically industrial pig farming, may favor the spread of the virus, with the animals as contamination vectors. “This is a hypothesis, but the spatial correlation is very high,” Bombardi says.

They presented the state of Santa Catarina, which accounts for 25% of Brazil’s pork production and a high COVID-19 infection rate, as evidence in their first paper. The low population density in the state’s western region, compared to the more crowded coastal area where infection rates are high, should have slowed the spread of the coronavirus inland. But that wasn’t the case.

“The novel coronavirus is moving to smaller towns in Brazil, and that is highly connected to meatpackers,” Bombardi says. “This has to do with two things: unhealthy human labor and poor conditions in pig farming.” The paper warns about untreated pig excrement entering into water bodies, posing the risk of infecting drinking water and spreading disease. “Testing pigs’ waste would be crucial,” Bombardi says.

The spatial correlation between COVID-19, pig farming and low population density found in Santa Catarina is repeated in the other states in southern Brazil, a region that accounts for 66% of the country’s pork production. The same pattern is seen in the United States. Northwest Germany, which has the highest pig production in the country, repeats that spatial correlation but with a higher population density, unlike the other two countries analyzed in the second paper on the topic.

The widespread theory that the SARS-CoV-2, the virus that causes COVID-19, spread from a wet market in Wuhan, China, was challenged in research published in May. According to that study, the virus had been circulating in China before that, and the first animal-to-human transmission occurred before the outbreak linked to the Huanan market. Experts from the Wuhan Institute of Virology (WIV) also said the initial transmission of SARS-CoV-2 did not occur at the Huanan market, which served instead as the site where it was further disseminated. Scientists have also discounted the theory that the virus was genetically engineered in a lab and then somehow got out.

What many experts do believe, though, is that there was likely an intermediary host between bats, where the virus is suspected to originate from, and humans. China is the world’s largest pork producer, and Hubei province, where Wuhan is located, is one of China’s five largest pork producers.

“There are many similarities between pigs and us, from the respiratory system to the gastrointestinal system,” Bombardi says. Pigs can catch the avian flu virus and human influenza virus at the same time, and then engender novel combinations that can be transmitted again and infect human beings.

This happened in March 2009, when a flu including respiratory infection appeared in an area close to an industrial pig farm in Mexico. The following month, the World Health Organization (WHO) declared the H1N1 swine flu pandemic.

A recent study published in the journal Proceedings of the National Academy of Sciences (PNAS) describes the analysis of influenza viruses found in China’s pigs between 2011 and 2018. They include a version of H1N1 with potentially pandemic characteristics. According to the study, the virus poses no imminent threat, but scientists have called for urgent, rigorous monitoring of the virus and human populations, especially pork industry workers.

Pig farming is usually intensive in Brazil: more than 70% of the animals are raised in confinement. “These animals have no access to soil or sunlight and consume mostly transgenic animal feed, because more than 90% of the soy produced in Brazil is transgenic,” Bombardi says. “Their daily diets also include antibiotics or other medications because they eat and defecate in virtually the same places. So they are potentially immunosuppressed animals.”

For biologist Rob Wallace, the intensive animal farming practiced over the past 40 years is the cause of the new viruses that threaten the planet with epidemics and pandemics. Wallace, the author of Pandemia e Agroindústria (Pandemia and Agroindustry), now on preorder in Brazil, says that balancing diversity is crucial in nature. But this doesn’t happen in intensive farming, where a large number of animals are packed into uniform conditions: same breed, age and biological systems. Overcrowding inhibits the immune response, he says, which makes this farming model akin to a giant pest.

While Brazil is the world’s fourth-largest pork producer, “competition with other countries is a challenge due to the lack of factors that support production, such as biosafety, hygiene, investment in labor and especially in animal welfare,” says a March 2019 study on animal welfare in pig farming.

Certain practices that are widely used in Brazil are avoided or restricted in other countries, such as the use of individual cages for pregnant animals. Conditions unfavorable to animal welfare often result in abnormal behavior, including self-mutilation, cannibalism, excessive aggression or apathy.

The Brazilian swine industry says it has been waiting for two years for the Normative Instruction on Animal Welfare for swine, and that current projects in the industry should adjust to the new standards.

Higher Demand for Pork and Soybeans

China is by far the world leader in pig farming. Next, come the European Union, the U.S. and then Brazil, which is also the fourth-largest pork exporter. According to data from the Swine Bulletin from the Center for Advanced Studies in Applied Economics (Cepea) of the Department of Economics, Administration and Sociology at the Luiz de Queiroz School of Agriculture (Esalq), in the first seven months of 2020, Brazil’s pork exports hit a record high. If shipments continue at this pace, the industry estimates that, by September, it will have exceeded the 639,500 tonnes exported for all of 2019. Such high demand has caused prices to increase.

Pigs are given animal feed produced from corn and soybeans; around 79% of the world’s soybean production goes toward making this feed. The high demand for pork therefore translates into increased demand for grain. Fifty percent of the soybeans exported worldwide come from Brazil, and the commodity accounts for 40% of the country’s total agricultural exports. Soybean plantations in Brazil cover an area the size of Germany.

Industry projections indicate increasing demand for soybeans worldwide, and especially in Asia. According to estimates by the Brazilian Association of Soy Producers (Aprosoja), Brazil exported 60 million tonnes to China in 2019 and may export up to 66 million this year. With new records, Aprosoja says in its newsletter, “China continues to buy soy from Brazil because it is the ‘cheapest.’”

The environmental impacts from industrial pig farming and slaughter include the threat of deforestation in the Cerrado grasslands and Amazon rainforest associated with the expansion of farmland for soybeans and corn. There’s also the burning and contamination from the intensive use of pesticides to produce transgenic grains. To this, researchers add the social impact on the country’s food security as crops meant for direct human consumption are crowded out.

“The expansion of soy and corn plantations is clearly correlated to animal feed, both in domestic consumption and in the amount of grains that are meant for exports,” Bombardi says.

In February 2020, Bombardi, who is also one of the authors of the atlas Geografia do Uso de Agrotóxicos no Brasil e Conexões com a União Europeia (Geography of the Use of Pesticides in Brazil and Its Connections with the European Union), gave the lecture “Living under poison” on the Fru.to food platform. She quoted Uruguayan writer Eduardo Galeano by saying that “sovereignty begins at the mouth,” which underscores the point that decisions about food production and consumption have their weight and consequences.

Deforestation for farming and logging, along with global climate change, is taking the Amazon to a point of no return that could result in the forest’s rapid extinction. A large part of this is driven by agribusiness.

As the researchers warn, industrial pig farming needs to be monitored. Other effects and consequences may yet emerge. “The possibilities that these animals become repositories and laboratories for other viruses are enormous,” Bombardi says. “We will have to deal with that, I think, in the short term. This can be a channel for another pandemic.”

This article was originally published on Mongabay, written by Sibélia Zanon, and is republished here as part of an editorial partnership with Earth.Org.