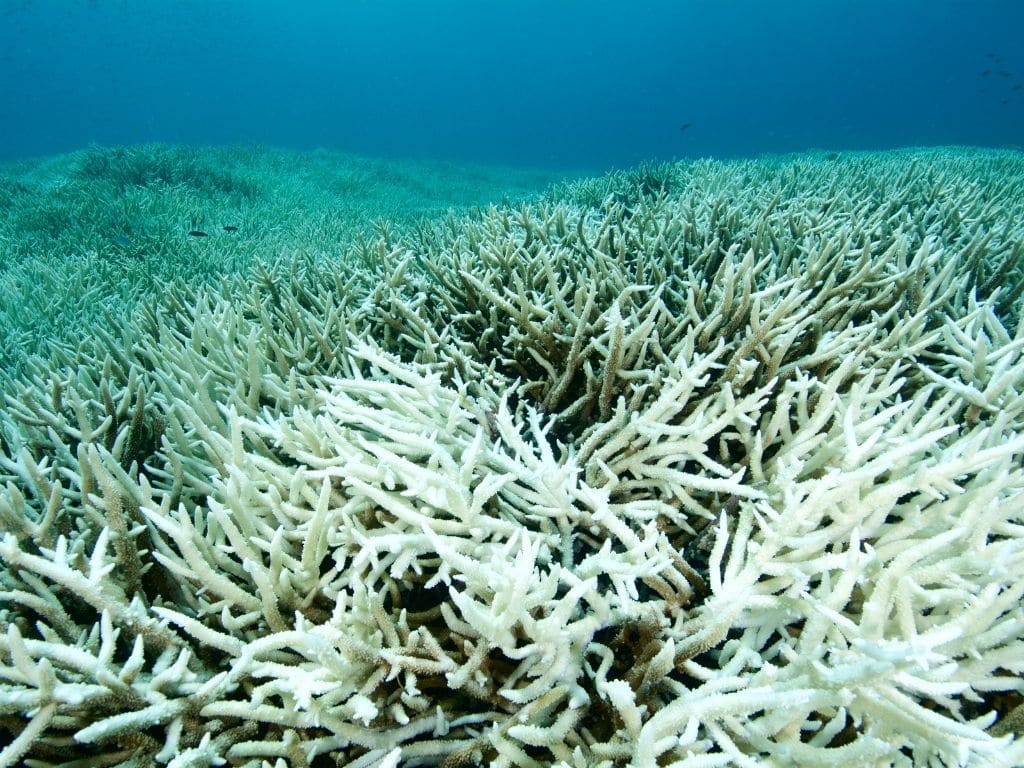 Climate change and rapidly rising ocean temperatures are killing the world’s coral reefs, where 14% of global coral cover has already been lost within a decade.

Global warming and rising ocean temperatures have cost the world 14% of its coral reefs between 2009-2018, reflecting how climate change is the greatest threat to global coral reef ecosystems, according to a new UN-backed report.

Coral deaths are caused by coral bleaching events, which occur when rising ocean temperatures disrupt the symbiotic relationship between the reefs and algae that lives within it, effectively driving away the algae. “Bleaching can be thought of as the ocean’s version of the ‘canary in the coral mine’ since it demonstrates corals’ sensitivity to dangerous and deadly conditions”, the report says.

14% is an incredibly significant loss. It amounts to about 4,500 square miles of reef, or more than the size of all the living corals in Australia, including the iconic Great Barrier Reef.

This staggering new data comes from the Sixth Status of Corals of the World: 2020 Report, which has compiled research from more than 300 scientists from 73 countries,  including two million individual observations conducted over a span of 40 years.

The UN Environment Programme (UNEP)-funded report revealed that underwater coral cities support up to 800 different species of hard coral and are home to more than 25% of all marine life. They also support “the highest biodiversity of any of the world’s ecosystems”, making them one of the most biologically complex and valuable natural systems on the globe.

Coral reef ecosystems are not just important to marine life, but they also provide food and financial security to coastal communities and hundreds of millions of people around the world.  Despite coral cover amassing to only 0.2% of the seafloor across more than 100 countries, based on the goods and services they provide, coral reefs are estimated to generate USD $2.7 trillion per year, $36 billion of which is from coral reef tourism.

However, they’re all under threat as issues derived from human activity and climate change, including ocean acidification, marine pollution, overfishing, as well as sediments from agriculture, continue to pile up and kill off our vulnerable coral reef ecosystem.

“Maintaining the integrity and resilience of coral reef ecosystems is essential for the wellbeing of tropical coastal communities worldwide, and a critical part of the solution for achieving the Sustainable Development Goals (SDGs) under the 2030 Agenda for Sustainable Development”, the authors wrote in the report.

But not all hope is lost. The comprehensive study found coral reefs remain remarkably resilient and have the ability to recover. One example highlighted how following a 1998 mass coral bleaching event, hard coral cover managed to rebound back to pre-1998 levels within a decade.

“If we halt and reverse ocean warming through global cooperation, we give coral reefs a chance to come back from the brink. It will, however, take nothing less than ambitious, immediate and well-funded climate and ocean action to save the world’s coral reefs”, said the report urges.