At the Southern Tip of Vietnam, Mangroves Defend the Land From the Encroaching Sea 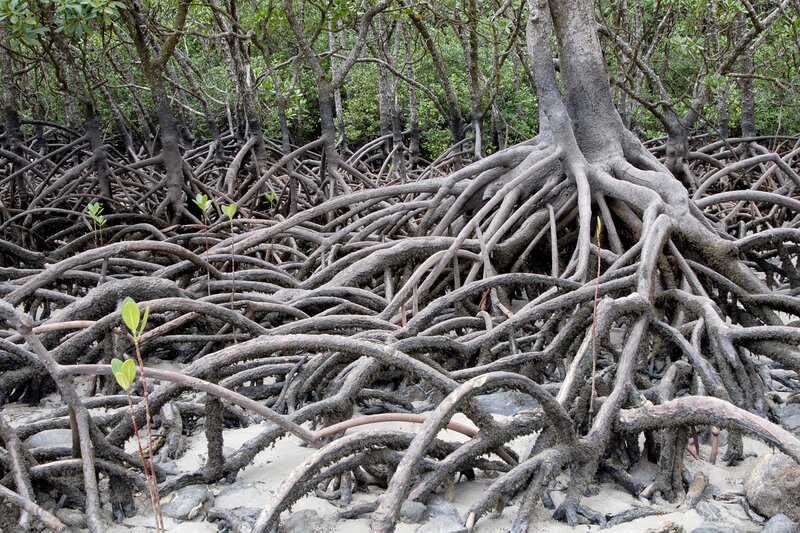 Seen from above, Cape Ca Mau National Park, at Vietnam’s southernmost point, juts into the Gulf of Thailand like a verdant green toe. This dark green shade is created by an expansive, ecologically vital mangrove forest. But the province the park sits in, also called Ca Mau, is losing forest and land to the sea. Local media report that since 2007, erosion has eliminated roughly 90 square kilometers (35 square miles) of protective coastal forest there, largely consisting of acacia trees. Volunteers have been working fervently to restore the mangroves in the area, vitally important ecosystems in Vietnam that could protect coastal land from encroachment.

In August 2020, the provincial government declared a state of emergency over concerns that an embankment on the west coast that had been stripped of forest would collapse from strong waves, rising seas and tidal movement.

This followed an incident in July in which 12 homes collapsed into a river in Ca Mau after the land beneath them eroded away.

Bordered by the sea on two sides and exposed to typhoons and rising sea levels, Ca Mau is among the most vulnerable regions of a country expected to face some of the worst future impacts from climate change. In response, people there are working to restore and preserve mangroves like almost nowhere else in Vietnam in an attempt to protect the remaining coastal land from encroaching seas.

One model for preventing future destruction can be found in Cape Ca Mau National Park. The park spans 420 km2 (162 mi2), a little less than one-third of which comprises a strictly protected core zone of mangroves.

“The forests in Mui Ca Mau National Park [the Vietnamese name for the park] are of vital importance in the regulation of ecosystems and geomorphology, as well as in coastal protection,” said Ly Minh Kha, deputy director of the park. “Mangroves along the coast and river banks have had important effects in preventing and combating wind and erosion, improving climate factors, reducing temperature fluctuations, and regulating rainfall.”

The park is also a Ramsar site. The region was once home to 16,000 km2 (6,178 mi2) of wetlands, but huge swaths of mangroves succumbed to defoliants sprayed by the U.S. military during the Vietnam War, and then conversion to shrimp aquaculture ponds in the following decades.

More recent conservation and regulatory work has stabilized the mangroves since the late 1990s and the park’s core is well-protected. Yet aquaculture is taking place outside of this zone, and the outer areas face threats like urbanization, land use conversion and deforestation that are common throughout Vietnam.

Since March 2020, Gaia Nature Conservation, an NGO based in Ho Chi Minh City, has been working to aid the natural generation of more mangroves in the heart of the national park. The goal, according to Do Thi Thanh Huyen, Gaia’s founder and director, is to turn an open mudflat into a healthy mangrove forest, perfect tree-growing methods, and raise awareness among local residents and the general public about the importance of protecting the forests.

“The planting of mangroves in Ca Mau not only increases the forest cover of the province, but also improves the economic and ecological values of the forests, including through soil retention, prevention of saline intrusion, water regulation, air purification, and nurturing aquatic larvae and creating habitats for rare species,” Huyen said.

Saltwater intrusion is a pressing issue in Ca Mau and elsewhere in the Mekong Delta, where rising sea levels and erratic flows of the Mekong River threaten crops of rice and produce that feed much of Vietnam and contribute billions of dollars to the economy.

The Gaia project site, which Mongabay was unable to visit due to government restrictions, covers 50 hectares (124 acres) of mudflats where people often anchor fishing boats or illegally exploit aquatic life.

To keep fruits from mangrove “mother plants” in nearby forests from floating away into the open ocean, Gaia installed a 2,900-meter (9,500-foot) fence of wood posts lined with fishing net along the site. Once these seeds take root in the mudflat, they will trap sediment, gradually building up the land. According to the NGO’s most recent report on the project, this initial forest growth will consist of the mangrove species Avicennia alba and A. officinalis. “These are pioneer species of the mangroves — the first tree to grow in the sea, followed by other Mangrove species,” the report says.

Gaia’s site includes five 1,000-square-meter (10,800-square-foot) plots where the regrowing forest will be closely monitored over six years to assess its health and estimate the number of new trees. Signs warn people from entering the area, and both the NGO and the national park administration regularly patrol the site, which they hope will eventually shelter 185,000 trees.

“We need to wait until June before we can count the number of growing trees,” Huyen said. The monitoring will help her team determine whether other activities, such as planting additional seeds, might be necessary.  “However, based on experience in Cape Ca Mau National Park for this kind of methodology, this is a very effective, cost-saving method of mangrove plantation.”

She added that she has been heartened by the number of individuals who have donated to the project — currently 6,547 — a sign that many people recognize the importance of protecting Ca Mau’s mangroves.

East of the national park, on Ca Mau’s coastline facing the East Sea (known as the South China Sea internationally), dense mangrove forests give way to countless thin aquaculture plots, where the approach to mangroves is much different.

Here, shrimp farming is king. In January and February of 2021, Ca Mau’s shrimp exports hit $106 million, putting the local industry on track to bring in well over $500 million for the year.

According to the Ministry of Agriculture and Rural Development, the province currently has 190 km2 (73 mi2) of shrimp farms that meet international standards for organic sourcing, sustainability and safety such as GlobalGAP. The dominant shrimp production method in Vietnam involves open ponds with no tree cover. Here, though, officials hope to expand a production model that integrates shrimp cultivation with forest.

Andrew Wyatt, deputy head of the IUCN Indo-Burma Region, has been involved with this so-called integrated model since 2012, in partnership with the International Climate Initiative of the German government. Through a project called Mangroves and Markets, Wyatt and his colleagues worked to find ways that farmers could benefit financially from maintaining mangrove coverage within their shrimp ponds.

Ca Mau zoning rules already fully protect mangroves along the coast, prohibiting aquaculture, according to Wyatt. Further inland lie two shrimp production zones. In the outer production zone, the shrimp farms are integrated with the mangroves, and farmers are asked to maintain a balance of 60% tree cover and 40% water surface for farming. Here, farmers are not allowed to clear-cut all of their mangroves at one time. If they want to cut the trees, to sell the wood or use it for cooking fuel, they have to get approval from the forest management board, Wyatt said.

“So they can cut half of their farm and replant it, and then wait another five years or so before cutting the other half,” he said. “That way they maintain a protective function against storms.” 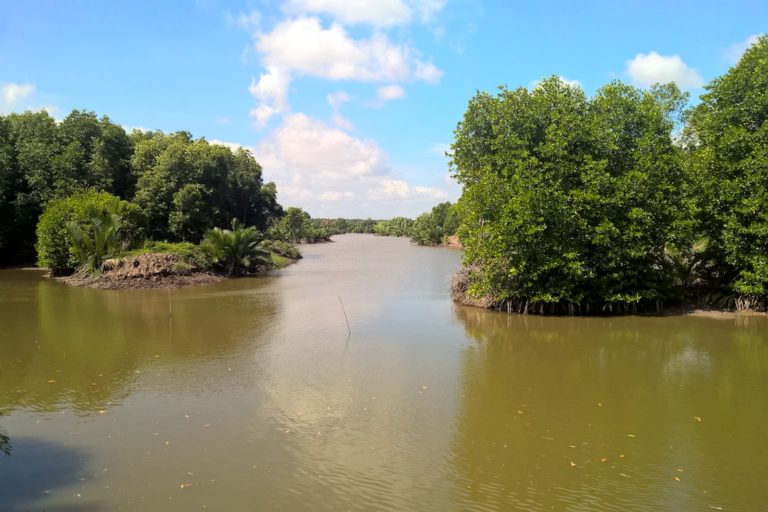 Meanwhile, in the inner production zone, which starts 10 km (6 mi) inland from the coast, farmers can clear-cut their whole farm in one go.

“These farms have been here since the French colonial period, and the trend over the decades has been the expansion of shrimp farming area and whittling away of forest cover,” Wyatt said. “So what Mangroves and Markets tried to do was to link a market mechanism to reforestation or the maintenance of forests.”

The program helps farmers who maintain forest cover on their plots, especially in the inner production zone where clear-cutting is allowed, to gain access to international organic certification, which brings a premium price for their shrimp and boosts their income.

This mixing of aquaculture with mangrove forests on a large scale in Ca Mau is unique in the Mekong Delta, and it has proven effective. The province’s mangrove forest cover has remained largely stable and Wyatt said farmers living in this landscape have noticed minimal impacts from typhoons with significant storm surge.

Other provinces in the delta have focused more on hard barriers such as embankments to prevent erosion and deflect storm surge. This has led to a phenomenon called coastal squeeze in Bac Lieu province, which neighbors Ca Mau to the east.

Coastal squeeze occurs when natural habitats outside of a man-made structure disappear to erosion after being cut off from their wider ecosystem. Satellite imagery shows it clearly: Ca Mau’s healthy strip of coastal mangroves vanishes as it reaches into Bac Lieu.

Nonetheless, erosion is still occurring in Ca Mau, even with this mangrove strip in place, showing how persistent this problem is.

“Still, we always use Ca Mau as best practice, so we advocate this kind of zoning approach,” Wyatt said. “Even with erosion happening on the shoreline, it’s not critical because you don’t have heavy urban populations living in the forests, and the trees are still providing some form of protection up to 6 miles inland.”

While it’s too late to save the homes and forest already lost to erosion, efforts to preserve and expand mangrove forests in Ca Mau highlight just how effective these forests are at keeping both people and biodiversity safe from the elements.

This article was originally published on Mongabay, written by Michael Tatarski, and is republished here as part of an editorial partnership with Earth.Org.