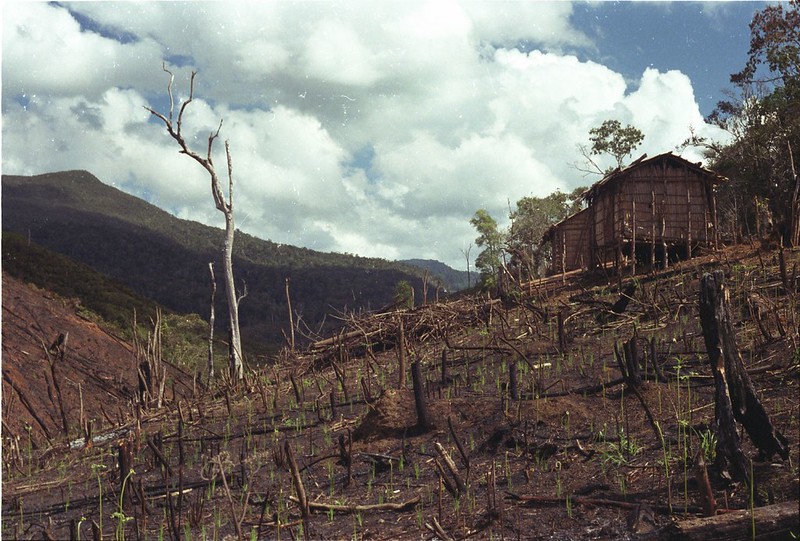 Exchange-traded funds, or ETFs, have swept through the financial world, building to a collective worth of $6.7 trillion by the second half of 2020. An ETF is a sort of hybrid between a single-company stock that’s easy to trade, and a low-cost, diversified mutual fund that spreads an investor’s risk among a selection of different companies. But this Goldilocks solution, feverishly attractive to individual and institutional investors alike, entails feasting on a measure of tainted porridge, according to a recent report by the London-based nonprofit financial think tank Planet Tracker. Financial firms investing in these funds translates to support for deforestation and other environmental damage coming from a broad swath of society, the authors write.

The analysis found that 70% of the ETF market is in the grasp of three U.S. financial firms. And just four companies hold the reins to 60% of the related market for index funds, which track major market indicators such as the S&P 500 in New York or the FTSE in London. Many ETFs are pegged these indexes.

That level of influence means that these companies have an outsize opportunity to end financial support for companies that clear forest — if they choose to do so, said John Willis, the report’s lead author.

Index funds, and especially ETFs, have surged in popularity in recent decades. Total investment in these products in 2020 was more than five times what it was in 2010.

“They’re still growing at a phenomenal rate,” Willis said in an interview.

To get an idea of the scale of ETF support for deforestation, Willis and his colleagues looked at 26 publicly traded companies that produce or process soybeans and also have ties to deforestation, using the graded list of companies compiled by the search platform Deforestation-Free Funds. Soy production ranks just behind cattle ranching as the largest force behind deforestation in the tropics, touching off the loss of half a million hectares (1.2 million acres) of forest each year. The Planet Tracker analysis uncovered investments worth $9.3 billion from ETFs in these companies as of mid-2020.

The Planet Tracker report found that BlackRock, State Street Global Advisors and Vanguard control more than two-thirds of all ETFs. On the index fund side, Bloomberg, FTSE Russell, MSCI and S&P Dow Jones are the major players; all are U.S.-based companies, except for U.K.-based FTSE Russell.

Because these markets are highly concentrated in the hands of just a few firms, they “together have disproportionate power to mitigate deforestation risk (as well as other natural capital risks) in the ETF market,” the authors of the Planet Tracker report write.

‘A Fast Reduction of Deforestation’

Willis and his colleagues contend that these asset managers should swiftly shed “deforestation-linked companies from their universal product offerings.” They also defend the rights of consumers to know where their money is going.

With index funds, this transparency is straightforward. An investor in an S&P 500 index fund owns slivers of all 500 of the companies that make up perhaps the best-known indicator of the U.S. stock market. But as the ETF market has grown — and with it competition for customers seeking easy, low-cost investing — financial firms have developed often complicated financial instruments aimed at harvesting the highest returns. These funds might cloak the managers’ investment choices from the public view the way that Coca-Cola famously guards its soft drink recipe. Their justification is that their special blend of companies is a proprietary secret that they don’t want other investment firms to steal, nor do they want to tip off other investors about large buy or sell orders that might be coming.

But that opacity also means that investors are blind to whether these funds are supporting companies with deforestation in their supply chains, Willis said. As an investor, he added, “The first thing I think I need to know is, what am I buying? Because in a lot of cases I don’t.”

Related to transparency is the question of choice, Willis said. Financial firms could — and to some extent, do — provide funds that don’t include investments in companies that damage the environment, typically under a category known as ESG, short for environmental, social, and (corporate) governance.

Willis said they could go even further, using their sway to convince the indexes themselves to exclude companies linked to deforestation from their rolls. Investments by asset management firms span many sectors of the economy. With that widespread sway, fund management firms also have the ability to steer the direction of these companies, the Planet Tracker team writes. Like other shareholders, they can vote on proposals that might address issues such as deforestation. Until recently, however, ETF managers have largely stayed out of that fray.

The report’s authors pointed to findings by Dutch NGOs Profundo and Friends of the Earth U.S. looking at the impact of asset management companies after the Consumer Goods Forum, a worldwide network of companies headquartered in France, committed in 2012 to net-zero deforestation for its member countries by 2020. The NGOs’ research revealed that, through September 2020, BlackRock, State Street, and Vanguard had either abstained or voted against 16 shareholder resolutions aimed at tackling deforestation in these companies’ supply chains.

Several of the financial firms listed in the Planet Tracker report told Mongabay that they are in fact working to bring about change.

“[O]ur Investment Stewardship team regularly engages with executives and boards, including holding discussions with relevant companies on deforestation and its risks to long-term business sustainability,” a spokesperson for Vanguard said in an email. “If a company does not make progress towards addressing such risks, we will hold them accountable to promote and protect long-term value for our investors.”

A spokesperson for S&P Dow Jones said that it monitors “the market’s evolution and investor demand” to develop new indexes suited to its client’s requirements.

“For example, we offer environmentally-focused indices designed to meet certain sustainability goals and exclude companies that don’t meet those targets,” the S&P spokesperson said in an email.

The London Stock Exchange declined to comment on the report. Bloomberg, MSCI and State Street did not respond to requests for interviews or comment.

To date, few financial leaders have leaned further into the conversation around the evolving ESG market than Laurence D. Fink, founder and CEO of BlackRock. In 2020, his annual letter to the CEOs of the companies in which BlackRock is invested focused on climate change, and specifically how it will affect balance sheets.

“Investors are increasingly reckoning with these questions and recognizing that climate risk is investment risk,” Fink wrote.

In the year since, BlackRock says it has added 51 ESG-focused index ETFs to its menu, with the goal of reaching 150 such offerings. (In late January 2021, it had 141 ESG “solutions,” according to the firm’s website.) Funds like BGF Circular Economy promise investors that 80% of their money will support companies that are part of the waste-minimizing “circular economy” ethos. Fund’s managers also don’t buy shares in oil-, coal- and gas-related enterprises.

In an interview with the Aspen Times just after Fink’s 2020 letter went public, environmentalist and author Bill McKibben noted “the fairly remarkable news that after unrelenting pressure from activists, BlackRock is now stepping up its efforts to at least begin doing something about climate change.”

“We need a lot more of that,” McKibben added.

But some have criticized Fink and BlackRock for not moving earlier to address its financial support of CO2 emitters and fossil fuel companies, and others have called his company’s recent focus on ESG issues little more than “greenwashing.”

A 2020 investigation by the Brazilian nonprofit environmental journalism site ((o))eco found that BlackRock had more than $400 million invested through various funds in the three largest meatpackers in Brazil. Collectively, the cattle operations of JBS, Marfrig and Minerva have been linked to 69,000 square kilometers (26,600 square miles) of land in the Amazon that carries the risk of deforestation.

What’s more, a separate investigation by Mongabay Latam and Repórter Brasil revealed that BlackRock has nearly $10 million invested in JBS, the largest meat exporter in the world, through its Carbon Efficient Index fund. Though it is not on BlackRock’s list of ESG ETFs, this fund tracks a Brazilian index for companies that adopt “transparent practices in respect to their emissions of greenhouse gases,” according to the BlackRock factsheet. The fund literature makes no mention of the carbon-containing greenhouse gases emitted as a result of deforestation.

Deforestation Still on the Back Burner

Still, Fink’s 2021 letter was highly anticipated, reflecting the influence that the world’s largest asset manager and its $7 trillion portfolio carry. In the Jan. 26 letter, Fink homes in on the concept of net zero, in which companies as well as countries work to balance out their carbon emissions, while contending that money could be made in this shift.

Notably absent from both this year’s letter and the 2020 missive is any mention of deforestation. After criticism about its voting record as a shareholder, BlackRock says it voted to support a deforestation-related proposal at Procter & Gamble’s October 2020 meeting. The proposal asked P&G to report on its efforts to stamp out its connections to deforestation and forest degradation, specifically in its wood pulp and palm oil supply chains.

More broadly, BlackRock says it has voted to support eight of nine environment-related shareholder proposals since July 2020. BlackRock declined to comment on the record for this article.

Like McKibben, Willis said firms like BlackRock may have to be convinced by NGOs and activists that it’s worth confronting deforestation-laden supply chains such as those that produce the world’s supply of palm oil, rubber, timber, cattle and soy.

But he also said asset management companies like BlackRock have the wherewithal to know which of their investments carries the risk of deforestation.

“They could afford the research to do that,” Willis said. With that information, then, how complicated would it be to cast off that risk from their portfolios?

“You could switch a button,” he said, “if you really wanted to do it.”

This article was originally published on Mongabay, written by John C. Cannon, and is republished here as part of an editorial partnership with Earth.Org.