What is Space Junk and How Does It Affect the Environment? 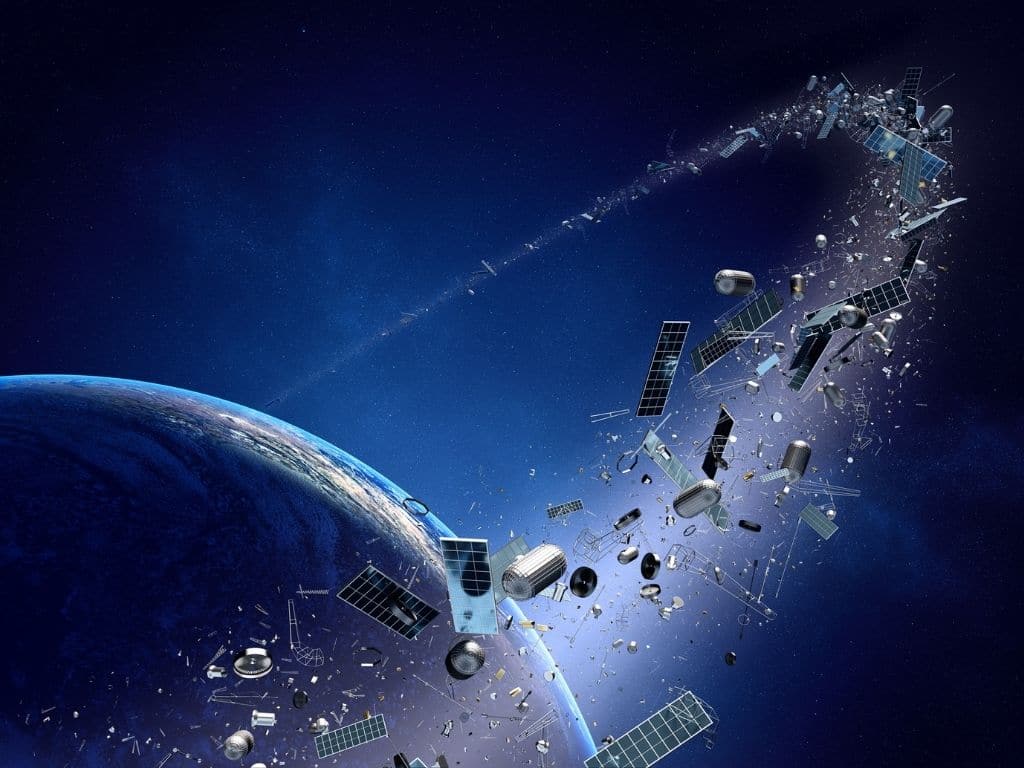 Space junk is classified by NASA according to whether it is of natural or artificial origin, with the latter defined as ‘any man-made object in orbit around the Earth which no longer serves a useful function’. But how does space junk affect the environment and us? The accumulation of space junk poses a particularly catastrophic threat to humankind’s future in space exploration, due to increased risk of collision with and damage to functioning satellites. It could also have detrimental effects on Earth’s environment.

What is Space Junk?

Artificial, or orbital, space junk consists of objects ranging from paint flecks from functioning space stations, to those as large as decades-old, inoperative spacecraft. As of August 2021, the European Space Agency (ESA) reports that approximately 29,210 pieces of debris are tracked on a regular basis by Space Surveillance Networks. Statistically, however, the numbers are likely to be much higher. The count of artificial objects in orbit around the Earth that are greater than 10cm in length is likely to be approximately 34,000, with approximately 900,000 objects between 1cm and 10cm. For those objects between 1mm and 1cm, the count is some 128 million. Consequently, the sheer number of these objects currently in orbit, and their potential to slam into other objects at speeds of up to 5 miles per second, means that the risk of causing serious damage to functioning spacecraft is significant. In 2006, the International Space Station’s (ISS) fused-silica and borosilicate-glass fortified window suffered a 7mm chip due to an impact from a piece of space debris no larger than thousandths of a millimetre across. It is easy to see the threat posed by much larger objects.

A single collision can generate thousands of particles of space trash. In 2009, the inactive Russian satellite Cosmos 2251 collided with the active American communication satellite Iridium 33 approximately 804 kms above Siberia, resulting in approximately 2,000 pieces of debris at least 10cm in diameter, and thousands more smaller pieces, entering the Earth’s atmosphere. It is estimated that over 50% of the debris from Iridium 33 will remain in orbit for at least a century, and that of Cosmos 2251 for at least 20 to 30 years.

Most space junk is located in what is known as low Earth orbit – the zone within approximately 2,011 km of the planet’s surface, and in which many satellites, such as the ISS and NASA’s Earth Observing Fleet System, operate. Effects of space debris can be significant; allowing space junk to accumulate, and henceforth increase the risk of further collisions similar to that of Iridium 33 and Cosmos 2251, poses a great risk to the possibility of future space exploration.

The >4700 launches that have been conducted across the globe since Sputnik 1 in 1957 have resulted in a steep upward trend in material mass in Earth orbit, which has exceeded 700 metric tons and shows no signs of relenting. According to computer simulations focusing on the next 200 years, over this time debris larger than approximately 20 cm across will multiply 1.5 times. Debris between 10 inches and 20 cm is set to multiply 3.2 times, and debris smaller than 10 cm will increase by a factor of 13 to 20. The risk this poses to satellites such as the ISS, which as of 2016 has had to perform 25 debris collision avoidance manoeuvres since 1999, is considerable.

The problem is not confined to the risk posed to space exploration. A proportion of the space junk in low Earth orbit will gradually lose altitude and burn up in Earth’s atmosphere; larger debris, however, can occasionally impact with Earth and have detrimental effects on the environment. For example, debris from Russian Proton rockets, launched from the Baikonur cosmodrome in Kazakhstan, litters the Altai region of eastern Siberia. This includes debris from old fuel tanks containing highly toxic fuel residue, unsymmetrical dimethylhydrazine (UDMH), a carcinogen which is harmful to plants and animals. While efforts are made to contain fallout from launches within a specified area, it is extremely difficult to achieve completely.

Anatoly Kuzin, deputy director of Khrunichev State Research and Production Space Centre, which manufactures Proton rockets, maintains that thorough testing shows no correlation between reported illnesses in affected areas and the rocket launches. Testimonies from locals, however, refer to a disproportionate number of cancer cases in the area which many believe is related to the UDMH in the fuel tank debris; in 2007, 27 people were hospitalised in the Ust-Kansky District of Altai with cancer-related complications, many of them citing the rocket fuel as the suspected cause.

Efforts to tackle the problem started in the 1990s, with NASA’s orbital debris mitigation policy and guidelines. The U.S. National Space Policy of 2006 and 2010 emphasises the necessity to implement the U.S. Government Orbital Debris Mitigation Standard Practices, which prioritise debris-release control, selection of safe flight profile and operational configuration, and the secure disposal of space apparatus after a mission. 2002 saw the first internationally-recognised standard consensus on orbital debris mitigation guidelines, but in place by the Inter-Agency Space Debris Coordination Committee.

However, head of the ESA’s space-debris office in Germany, Holger Krag, estimates that only half of all space emissions abide by these guidelines. The introduction of mega-constellations – mass groupings of artificial satellites – into low Earth orbit, Krag warns, will bring the need to remove failed satellites from space, on which most companies will not want to spend money. NASA warns against the accumulation of mega-constellations and miniature satellites such as CubeSats, which will do nothing to alleviate the growing problem.

In May 2020, economists at the University of Colorado Boulder proposed attaching an annual fee, rising 14% per year, to each satellite put into orbit in the hope that the fee might discourage the unnecessary accumulation of space junk. Other measures proposed over the years have included removal of large pieces of debris with instruments such as harpoons and lasers, the development of self-removing satellites, and the coating of satellites in polymeric foam, to allow them to descend into the Earth’s atmosphere and burn up. As yet, however, there is no universally recognised solution to the problem. More spaceflight companies must adhere to the guidelines set out by the Inter-Agency Space Debris Coordination Committee, and it is vital that the movement to reduce future accumulation of space junk becomes a more cohesive, vigorous effort.