While the majority of fires throughout the history of the US have been started by careless human actions, they have in recent years become more ferocious because of the climate crisis. In fact, rising temperatures are making them more intense, frequent, and destructive. Here are 15 of the largest wildfires in US history.

Following an unprecedented heat wave in June 2021, California was once again engulfed in raging wildfires. According to CalFire, the fire has burned more than 463,000 acres in Northern California, taking hundreds of buildings down with it and threatening nearly 14,000 structures. Experts have warned that the Dixie Fire’s dramatic growth and size are fuelled by severe drought conditions and global temperature increase. The Dixie Fire of 2021 was named the second-largest fire in California history.

Starting in the Bay Area, the Bay Area fire was one of the largest wildfire in US history and tore through parts of California, Oregon and Washington state. By September 15, they burned almost one million acres of land and killed at least 35 people. At one point, every 24 hours, an area the size of Washington DC was being burned. The North Complex fire alone was responsible for more than 300 000 acres of scorched land, killing 16 people in its wake. Five of the six largest blazes in the state were recorded in 2020. Meanwhile, Stanford researchers estimate that the smoke and resulting poor air quality eventually led to hundreds of excess deaths in California cities and across the west coast in Washington and Oregon.

This wildfire map uses near and shortwave infrared data collected between July 24 and September 26th, 2020, to track changes in the landscape’s green spaces. The bar at the bottom measures the severity of the burns from the deadliest wildfire in US history (Source: Earth.Org).

The Camp Fire was reported on November 8 2018 in Butte County. The fire grew rapidly and became the deadliest and largest fire in California history. It burned 153 336 acres, destroyed nearly 19 000 homes and killed at least 85 people. While it was contained on November 25, search and rescue efforts continued into December.

The Tubbs Fire started in October 2017 in Northern California and was one of more than 200 fires that hit the state that year. The wildfire burned more than 36 800 acres across Sonoma and Napa counties. The fire killed 22 people and destroyed thousands of homes; the city of Santa Rosa lost 5% of its housing stock.

The Yarnell Hill Fire started on June 28, 2013 in Yarnell Arizona. The wildfire is believed to have been started by a lightning strike and it burned more than 8 000 acres of land. The fire killed 19 firefighters, making it the deadliest and largest wildfire in Arizona history.

The 2004 fire season in Alaska was the worst on record in terms of area burned by wildfires in the history of the US state of Alaska. More than 6.6 million acres of land were burned by 701 fires. 215 of these were started by lighting strikes; the other 426 were started by humans. The summer of 2004 was extremely warm and wet in comparison to typical interior Alaska summer climate, which resulted in record amounts of lighting strikes. After months of this lighting and increased temperatures, an uncharacteristically dry August resulted in the fires that continued through September.

This famous wildfire started on the hills of Oakland, California on October 19 1991. It started as a wind-driven brush fire, but turned into a firestorm that tore through residential neighbourhoods and charred 3000 homes and apartment buildings. In just two days, the fire spread across 1 520 acres of land. 25 people were killed and at least 150 more were injured.

These fires collectively formed the largest wildfire in the recorded history of the Yellowstone National Park in the US. Spurred by drought conditions and winds, the fire quickly spread out of control and turned into one large fire that burned for several months. Only cool, moist autumnal weather extinguished the fires. A total of 793 880 acres, or 36% of the park, were affected by the fires. More than 9 00 firefighters fought the fires at its peak and at one point, more than 4 000 US military personnel were brought in to assist.

On October 12, 1918, sparks from a railroad led to a wildfire in Carlton County, Minnesota because of extremely dry conditions. More than 250 000 acres of land was burned and at least 550 died, while a further 12 000 were injured or displaced.

Also called the Big Burn, Big Blowup or the Devil’s Broom fire, this wildfire roared through the states of Idaho and Montana during the summer of 1910. The fire burned for just two days, but strong winds caused the initial fire to combine with other smaller fires to form one massive blaze that destroyed 3 million acres and killed 85 people, making this one of the worst wildfires in Us history.

This is the collective name for dozens of fires in Washington state and Oregon that occurred between September 8 and September 12 1902. They collectively caused 65 deaths and burned through 500 000 acres. In addition to careless human action, the summer of 1902 had been drier than usual and there was a build up of slash left from loggers that had not been burned off properly in the preceding two summers which acted as fodder for the fires.

In October 1871, the Great Michigan Fire started out as a series of smaller fires that merged. The fire ravaged the towns of Holland, Port Huron and Manistee, as well as the shoreline of Lake Michigan. The fire is estimated to have burned at least 3 900 square miles in Michigan and killed around 500 people.

The blaze started on October 8 1871 and burned around 1.2 million acres. At least 1 152 people were killed, making this the worst fire that claimed more lives than any of the other wildfires in US history. It happened on the same day as the Great Chicago Fire, which overshadowed the Wisconsin fire.

In September 1884, the Great Hinckley Fire broke out near the town of Hinckley, Minnesota. At that time, trees were commonly stripped of their branches before cutting them down for lumber, but that left pine forests filled with dry, dead branches. This fuelled the fire and caused it to burn 250 000 acres in just four hours. Officially, 418 people were killed but historians believe that hundreds of Native Americans were killed and were left out of the fatality count.

One of the largest wildfires in US history started on September 5 1881 in the Thumb region of eastern Michigan. The fire is thought to have been exacerbated by dry summer conditions and drought. Burning around 1 million acres, it spread from Lapeer County to Huron, Tuscola, Sanilac and Lapeer counties. At least 282 people were killed. The flames produced so much soot and ash that the sun was partially obscured in the East Coast, turning the sky a yellowish colour.

These are just some of the worst wildfires in US history; there are many more that have caused extensive damage to communities and landscapes. Climate change is increasing the frequency and intensity of wildfires around the world, but especially in the US and will continue to do so until the causes of climate change- including burning fossil fuels- are addressed urgently. No state can afford to deal with the carnage of these crazy fires every year, making curbing climate change absolutely vital

This year’s California wildfire season has spawned another grim milestone- the first ‘gigafire’- a fire spanning 1 million acres- in modern history. Have we reached a tipping point?

The complex fire in northern California that started in August spread beyond 1 million acres this week, moving it from a ‘megafire’- which describes a fire that is more than 100 000 acres in size- to a new classification, ‘gigafire’, which has never been used to describe fires before. It is now the biggest fire in the state’s history.

At the time of publication, the fire is currently at 1.03 million acres, caused by an amalgamation of several fires caused when lightning struck dry forests.

The fire has been burning for at least 50 days and has been a little more than half-contained.

Overall, the fires have burned through 4 million acres of California this year, double the previous annual record.

Unfortunately, this dry landscape caused by the fires make larger fires more likely. Big wildfires are now three times more common across to the west of the US than in the 1970s, while the wildfire season is now three months longer, according to Climate Central.

While parts of the state are expected to see temperatures fall with some light to moderate showers, climate scientists warn that it likely won’t be a season-ending storm.

Where Have We Seen The Gigafire Before?

The most recent gigafire in the US was the Taylor Complex in Alaska, which burned about 1.3 million acres in 2004. Another gigafire was seen in Australia, when two fires on the border between Victoria and New South Wales combined to burn about 1.5 million acres. 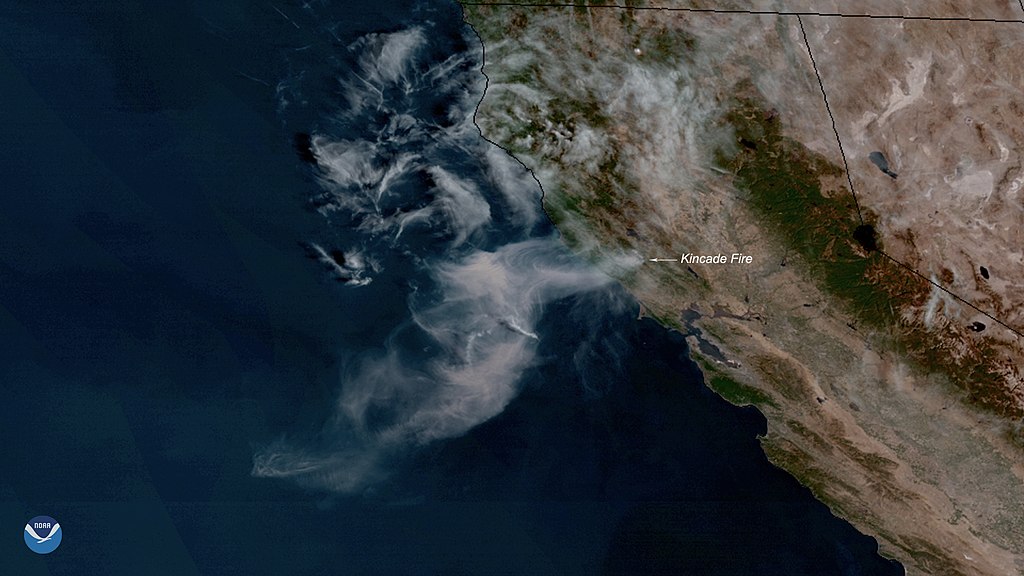