Historically, our planet’s land and oceans have functioned as major ‘sinks’ in the global carbon cycle, together absorbing about half of global carbon emissions. Unfortunately, their carbon sequestering effectiveness is rapidly diminishing as temperatures rise, to the extent that carbon deposits on land may become net greenhouse gas emitters by mid-century if climate policies remain unchanged. How can this phenomenon be explained, and how are its risks mitigated?

Over the past 150 years, human activities have emitted about 545GtC (Gigatonnes) of carbon, with fossil fuel combustion comprising approximately three-quarters of this. Since terrestrial and marine biomes have each absorbed at least 30% of these emissions, effects of global warming have been significantly restrained. However, their capacity for carbon storage is fundamentally dependent on environmental determinants and can hence be severely reduced in hotter or drier climates.

The Importance of Carbon Cycle

Most carbon on land is locked up in tropical rainforests, peatlands and permafrost. While higher CO2 concentrations initially stimulate vegetation growth by facilitating photosynthesis, these benefits are rapidly overshadowed by falling soil moisture amid rising temperatures, causing plants to dehydrate and die. Not only is carbon fixation directly reduced from plummeting productivity or death of plants, lower transpiration rates mean that rainfall is diminished, giving rise to hotter and drier climates. This creates ideal settings for fires to ignite or spread, releasing more CO2 into the atmosphere in a positive feedback loop. In 2019 alone, fires in Indonesia’s dry forests and peatlands emitted  more than 708 million tons of greenhouse gases, dwarfing the 366 million tons emitted from the Brazilian Amazon fires. 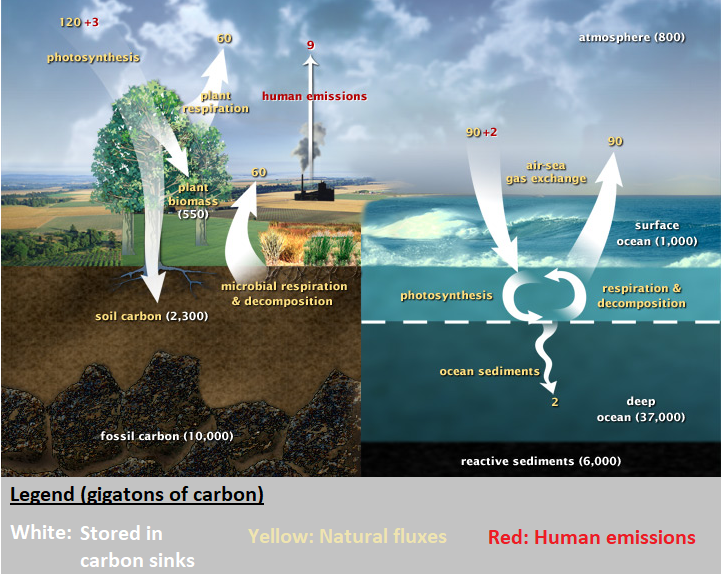 Outside the tropics, rising temperatures cause permafrost soils in polar regions to thaw. Notably, permafrost thaw in Russia allows decomposition of its largely-preserved organic material into carbon dioxide and methane, raising atmospheric carbon concentrations while undermining the stability of existing infrastructure. In oceans, warmer water temperatures reduce the solubility of carbon dioxide gases and impede its flow to greater depths, a process called ‘vertical mixing’, and may deprive phytoplankton of the nutrients they need to drive the biological carbon pump. More dangerous, however, would be the melting of deep-ocean methane hydrate, where methane is frozen in ice deposits. Despite potential applications as an alternative energy source, its release of trapped methane has been theorised to be a primary contributor in the end-Permian mass extinction. Though such occurrences are unlikely without significant spikes in water temperature, such potentially devastating consequences cannot be disregarded, especially when mean ocean temperature is already projected to rise by up to 4°C by 2100.

To disrupt these positive feedback loops in the global carbon-cycle, extensive reforestation or carbon capture and sequestration (CCS) are commonly proposed as mitigation strategies to offset our carbon footprint, however neither route can function as a silver-bullet for anthropogenic climate change by itself, unless the root causes of human-induced carbon emissions are fundamentally addressed. Doing so necessitates substantial coordination of climate policies in all major economies to disincentivise greenhouse gas emissions, notably through carbon-pricing mechanisms such as ‘cap-and-trade’ or Pigouvian taxation. Whilst transition risks may pose significant short-term disruptions, substantial action is necessary to prevent uncontrolled global warming in the long-term.