Volunteers in Mauritius are working to keep leaking oil from a ship away from the island. In late July, the ship- believed to be carrying over 4 000 tons of fuel oil- ran aground on a coral reef off the Indian Ocean island. The oil spill threatens Mauritius, an island nation that depends heavily on tourism to make money.

Locals have been seen stuffing straw into fabric sacks to contain and absorb the oil, going against orders from the government, who has asked people to leave the clean-up to local authorities. Helicopters are attempting to move some of the fuel and diesel off the ship. Wildlife workers and volunteers rescued dozens of baby tortoises and rare plants from an island near the spill to the mainland.

The ship- called the MV Wakashio- ran aground at Pointe d’Esny, a known sanctuary for rare wildlife. The oil spill area also houses wetlands that have been designated as a site of international importance by the Mauritius Ramsar Convention on Wetlands.

Mitsui OSK Lines, the operator of the ship, says that it tried to place its own containment booms around the vessel but due to rough seas, was unsuccessful. At least 1 000 tons of oil is thought to have leaked into the waters surrounding the island nation. 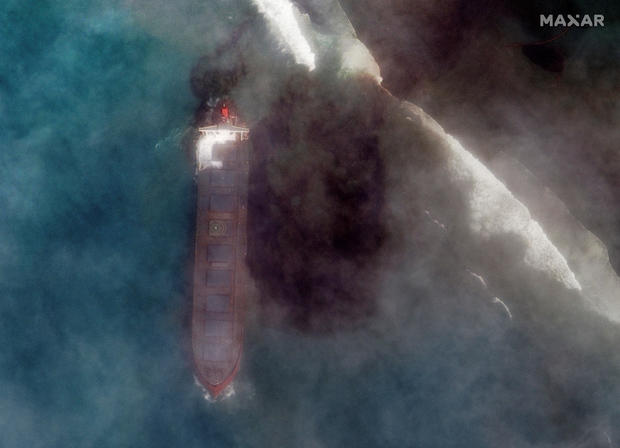 Akihiko Ono, executive vice president of the ship operator, ‘profusely’ apologised for the spill and for the ‘great trouble we have caused’. He promised that the company would do ‘everything in their power to resolve the issue’.

On August 7, Mauritian Prime Minister Pravind Jugnauth declared a state of emergency and asked the international community for assistance. He added that the country ‘doesn’t have the skills and expertise to refloat stranded ships’.

A police inquiry has been opened into possible negligence but environmentalists and residents have asked why it took so long for authorities to respond to the oil spill.

France has sent a military aircraft with pollution control equipment from its nearby island of Réunion. Japan announced it would dispatch a six-member team to assist the French efforts.

Happy Khamule, climate and energy manager from Greenpeace Africa, warned that thousands of animal species were ‘at risk of drowning in a sea of pollution, with dire consequences for Mauritius’ economy, food security and health’.

Heavy winds are expected to exacerbate the oil spill even farther along the island’s shore. The Mauritius Marine Conservation Society and other groups have warned that the oil spill cleanup could take much longer than expected.

This is a developing story. Follow Earth.Org for more.