As people around the globe stock their pantries for long stretches at home during the COVID-19 pandemic, sales of tinned tuna are going through the roof. In the U.S., consumption has increased 142% compared to the same time last year. But a new report released last month by environmental NGO Greenpeace highlights concerns about the ethical and legal credentials of many top tuna brands. The report is based on interviews with migrant fishers on three vessels operating in the Atlantic Ocean that are flagged or linked with Taiwan, including two longliners and a carrier that transports crew and fish to and from longliners. It suggests that forced labor and illegal, unreported and unregulated (IUU) fishing continue to occur within major tuna supply chains, despite efforts by companies and governments to stamp them out.

One of the vessels that interviewees accused of these practices supplies tuna to the Taiwan-based Fong Chun Formosa Fishery Company (FCF), one of the world’s largest tuna traders and the new owner of major U.S. canned-tuna brand Bumble Bee. Another of the accused vessels supplies tuna to a refrigerated cargo ship that FCF works with.

The fishers’ allegations included deception, physical violence, wage deductions, debt bondage, passport confiscation, and excessive working hours. For example, several fishers reported working 18-hour days, on average, and as many as 34 hours straight: “We only got to sleep for five hours if and when we caught some fish,” said one interviewee. “If we didn’t catch anything, we’d just have to keep working.” Crew were also transferred illegally between vessels.

The fishers also provided evidence that the vessels took part in unlawful fishing practices, such as shark finning and transferring shark fins between vessels. 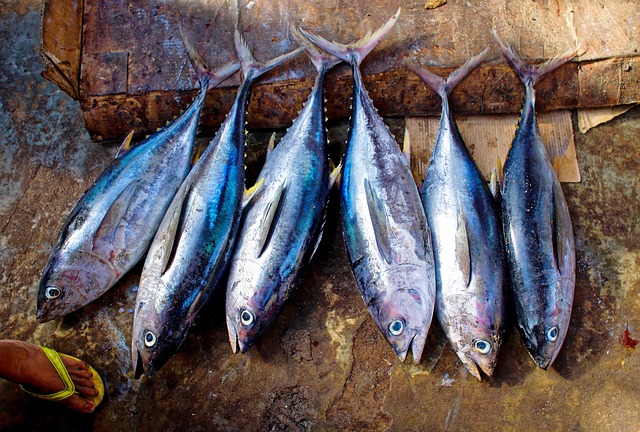 Reports of human rights abuses and IUU fishing have plagued the tuna industry in recent years, and several investigations have identified the practices of Taiwanese distant-water longliner vessels as particularly problematic. In 2015, the European Commission (the executive arm of the European Union) gave Taiwan a “yellow card” for insufficient cooperation in combatting IUU fishing, warning the country that if it did not improve, it would not be able to export products from its vessels to the EU. Recently, the Taiwanese government has implemented new controls to prevent IUU fishing and reformed its fisheries legal framework in an effort to improve its products’ traceability. In June 2019, the European Commission lifted Taiwan’s yellow card in acknowledgment of these efforts.

FCF did not respond to Mongabay’s requests for comment. The company has also made considerable effort to improve its track record in recent years, including releasing a new corporate social responsibility policy and participating in two Fishery Improvement Projects (FIPs), which are multi-stakeholder efforts to improve the environmental sustainability of particular fisheries.

But Greenpeace East Asia campaigner Pearl Chen told Mongabay in an email that FCF’s efforts are insufficient and out of step with national and international standards. For example, she said the company’s policy fails to specify a guaranteed amount of rest time for crew, which is not compatible with either Taiwan’s domestic regulations or the International Labour Organization’s Work in Fishing convention. Chen also pointed out that the FIPs that FCF participates in cover only a fifth of the longliners the company sources from, so its environmental commitments don’t apply to most of its supply.

In response to a 2018 report from Greenpeace that also linked FCF to human rights abuses on longliner vessels, a company statement said, “we are … disappointed that they are implicating FCF in old incidents and cases that have since been in all instances addressed in coordination with the Taiwanese Fisheries Department.”

But the cases the new report cites are from 2019, Greenpeace senior oceans adviser Andy Shen told Mongabay. “These are fresh cases,” he said. “That’s why we wanted to let the public know — and let FCF know that we know — that this is still occurring, and it’s occurring because there are systemic issues with the Taiwanese industry.”

The distant-water fishing industry is difficult to regulate because the vessels spend long stretches in remote parts of the ocean. Instead of returning to port when they’ve fished to capacity, many longliners offload their catch onto other boats that deliver it to shore, a practice known as transhipment at sea. “So they can stay out for months or years at a time,” Shen said. “And there’s no way to check on the real conditions of workers when they’re at sea.” Greenpeace and other prominent environmental and human rights organizations have called for transhipment at sea to be banned so companies and authorities can keep better track of the fishing and labor practices on distant-water vessels. In its latest report, Greenpeace also asks companies to ensure their suppliers commit to maximum periods of time at sea and to returning to ports that have labor inspection systems in place.

According to independent fisheries consultant Francisco Blaha, a former longline tuna fisher and fisheries observer, many island countries have been pushing for a ban on transhipment at sea for years, but China, South Korea, Japan and Taiwan have consistently opposed the move. “So this is not an issue of FCF per se,” he said. “It’s an issue that goes beyond the company and it goes to the level of politics, of flag states’ relationships.”

Labor conditions are further obscured by the international nature of the workforce, Blaha said. “In the past, the flag of the vessel and the crew of the vessel were the same [nationality],” he said, “but that’s not the case anymore.” Taiwanese vessel owners often contract crew agents to recruit workers from neighboring countries, such as Indonesia, the Philippines and Myanmar. Theoretically, Taiwanese labor laws, which include a minimum monthly wage, apply to anyone working on a Taiwanese-flagged vessel. “But if [those crew agents] offer less pay than what the law says, it’s quite difficult for Taiwan to put pressure on them,” Blaha said, “especially because Indonesia doesn’t recognize Taiwan as a country.”

Shen said he would like to see companies like FCF enact policies ensuring that each vessel supplying the company is assessed for human rights violations, that each violation is addressed and measures put in place to prevent future occurrences, and that the companies publicly report on their findings to ensure transparency. “That’s a system that a lot of companies just don’t have in place, but it’s something that makes sense, and it ultimately will protect the workers and it will protect their business,” he said.

But Blaha said he thought Greenpeace’s focus on FCF was misguided. “The issue of work conditions on vessels is massive, but it’s not exclusive to one company. Of course the company has influence, because it’s a big company, but there is a limit to the influence it can have,” he said. “It’s the responsibility of the whole fisheries spectrum, from regulators, to industry, to civil society and consumers. If you point fingers at just one element you’ll just antagonize them, and nothing gets solved.”

Shen and Blaha agreed on one thing: now is a particularly important time to spotlight the tuna industry’s fishers and factory workers’ conditions. Because food production is deemed an essential service in many countries, these employees will be under pressure to continue working as the COVID-19 pandemic spreads. “Companies need to really ensure they’re putting measures in place, including occupational safety and health measures and special protective equipment: measures to really help prevent the spread of the virus within these facilities,” Shen said.

But it will be challenging for the industry to keep up with demand in this context, Blaha said. “If you need to do social distancing in the factories, production will go down, because people there are normally working shoulder to shoulder,” he said. “And if people are getting sick, that’s fewer people on the front lines.” If production slows down, lots of fish will be lost, he said, because there’s not enough freezer capacity to store it while it’s waiting to be processed.

Fishers may also be reluctant to take observers and inspectors on board their vessels for fear of catching the virus from them, Blaha said. In fact, the requirement for purse seiner tuna boats to have 100% observer coverage has just been suspended in parts of the Pacific Ocean, in light of crews’ concerns. It’s an understandable move, but one that works against the advance of transparency in an industry that operates far beyond the horizon.

This article was originally published on Mongabay, written by Monica Evans, and is republished here as part of an editorial partnership with Earth.Org.