Whether offshore wind farms (OWFs) are “ecological problems” or “environmental solutions” is a multifaceted debate that reoccurs globally. The OWF industry is expanding rapidly, and the comparative knowledge gain is slow, which increases the potential for unanticipated impacts on marine environments, including pollution and overfishing. Interestingly, during the current COVID-19 pandemic, investment in offshore wind farms has skyrocketed. Despite these possible risks to local marine species, the global benefits of OWFs as a renewable form of energy outweigh the localised impacts. However, that is not to say the industry does not need reform, especially as it undergoes rapid expansion.

The main driver behind global OWF expansion is the climate crisis, as countries strive to reduce their greenhouse gas emissions. According to the REN21 Renewables 2020 Global Status Report, governments are increasing their renewable energy generation, and the success of OWFs seen in Europe (79% of global OWF capacity in 2018) has driven industry increase in Asia and North America. Out of the 2,378GW global renewable capacity in 2018, offshore wind energy accounted for 23.1GW, which was a 24% increase from 2017. Internationally, capacity is increasing by installing turbines with larger rotor size and rotary blades, and increasing turbine height and depth of sites. In Europe, the UK, Germany, France, Sweden and Belgium accounted for 80% of offshore wind capacity in 2018. This renewable drive across Europe derived from legislative exigency from the European Energy Directive 2009/28/EC, setting targets for member states of a ~20% share of energy from renewable sources by 2020, leading countries to examine the natural energy sources available to them, which increased OWF capacity in countries like the UK and Sweden.

The proximity of OWFs to the coast can overlap with sensitive ecological areas that are protected under European legislation. For example, there are eight OWFs with a collective capacity of 2GW in the Greater Wash Area on the North Norfolk Coast, UK, an area that includes 43 environmental designations of national, European and international importance. In Denmark, the Horns Rev wind farm is located within close proximity to coastal Special Areas of Conservation (SACs) and Special Protected Areas (SPAs) as part of the Natura 2000 network. Similarly, at the Fécamp OWF in Northern France, the farm is situated within a marine protected area.

For some conservationists, offshore wind farms are an ecological problem. Each stage of OWF development – construction, operation, and decommission – produces direct impacts on different taxa, as clearly outlined by Kadellis et al. (2016). Research on the impacts concentrates on birds, fish and marine mammals, especially cetaceans and pinnipeds. In the Greater Wash Area in the UK, for example, there has been noted mortality increases for small bird species such as Little Terns and Sandwich Terns, with the latter’s population being reduced by at least 35%, while researchers in Denmark at the Horns Rev OWF found harbour seals affected by noise pollution within a limited 100-200m area, and a significant loss of common scoter habitat.

Of all stages, construction is the main concern. Dr Deborah Russell of the Scottish Oceans Institute has argued that “it is during the construction phase that wind farms are predicted to have the most dramatic negative effect on marine mammals.” Generally, for all taxa mentioned above, construction results in avoidance behaviour, which is a type of activity observed in animals where, in the face of adverse stimuli, the impulse to act defensively overcomes the impulse to attack. Examples of this behaviour, are fleeing or moving away from the stimulus, hiding, or standing still, or defensive reflexes. In this case, avoidance behaviour is avoiding the OWF areas, even if they are near traditional nesting or breeding grounds for birds and marine mammals. This is due to intrusive pile-driving, seismic profiling and trenching, which increases noise levels and causes sedimentation of the water, in turn disturbing fish larvae. Increased noise levels affect mammals that rely on sound for predation, migration and communication. Research in Norfolk, UK identified pile-driving as the cause of grey and harbour seal population disturbance.

The main concerns with wind farms and birds, according to BirdLife International, is the risk of collision with OWF machinery, which could reduce population numbers, and cause disturbance, displacement or exclusion from the areas surrounding wind farms, which can be used for feeding, nesting or mating. The overall avoidance behaviour of fish is also expected to affect prey availability for some bird species. However, bird research in general is often species-specific, which makes it difficult to inform perspectives on whether offshore wind farms are damaging for bird biodiversity overall. A lack of larger spatial and temporal scale research is restricting conservationists’ views on OWF impacts by preventing them from seeing wider ecosystems and long-term benefits.

Contrarily, some conservationists argue that OWFs have species-, ecosystem-, and global-level benefits. At the local scale, OWF structures provide colonisation opportunities, as the concrete bases of individual turbines provide structures of different materials and textures that allow molluscs and benthic species to inhabit different areas of the complex structures, which support higher trophic levels, such as fish, creating a diverse ecosystem as habitat heterogeneity and species diversity increase. Research suggests that across wind farms, fish biomass is expected to increase, producing “de facto” marine protected areas. While some argue this will work against the fishing industry through exclusion, the spillover effect of larger fish to surrounding areas outside the OWF is expected to benefit the fishing industry as these species have larger ranges and would come into the OWF to feed. Researchers in the Bay of Seine in France used a model to predict that the increase of benthic fish aggregations would lead to an increase in biomass at higher trophic levels, improving the diversity and health of the ecosystem. However, models contain their own uncertainties, and therefore more research is needed on the reef effect and how it influences trophic relationships.

The most convincing argument in support of OWFs is at the global level, being its potential to contribute to mitigation of the climate crisis, one of humanity’s greatest biological crises. Possible environmental changes will result in habitat loss, migratory changes and species extinctions. Many environmental NGOs, including the RSPB and BirdLife International, have given their public support to OWF development. The mitigation of the climate crisis is integral to protecting sensitive habitats, such as salt marshes, which have international conservation importance and are essential bird habitats in many coastal regions that are vulnerable to climate change through sea-level rise. However, conservationists continue to argue for reform in initial monitoring and planning to reduce impacts on local species.

Therefore, in order to minimise the trade-offs between ecological risk and economic impacts, data gathered by developers during cumulative impact assessments (CIAs) and environmental impact assessments (EIAs) should be collaborative as trends show  that OWFs are becoming closer in proximity as individual countries try to increase their capacity. Data sharing could maintain consistent baseline data to determine the impact on specific species, but would require a negotiation of proprietary rights, which could pose legal challenges (Goodale and Milman, 2016).

Another solution comes in the form of technology in the form of improvements to assessment methodologies. Telemetry – the use of radio trackers to trace individual movements of a chosen species – can be used on multiple taxa, such as birds and seals, for more sophisticated tracking of species interactions with OWFs. Environmental modelling would allow researchers and developers to follow an ecosystem-scale approach in assessing OWF impacts. Although each comes with their own expenses and uncertainties, they are cheaper alternatives to developers than the additional costs incurred from the rejection of a planning proposal for an OWF, as already the investments into research, design, and environmental monitoring would have been conducted, producing a planning proposal that can be over 10 000 pages long. A planning rejection from local government would incur additional fees as the process would need to be started from the beginning, requiring new environmental assessments, and a redesign of the OWF spatial planning.

The significance of the impacts of offshore wind farms are weighed on spatial and temporal scales: choosing between the short-term (0-30 years) protection of local ecosystem integrity, or the long-term viability of the majority of sensitive habitat, marine and bird species. Further, the marine environment cannot continue to support anthropogenic pressures including OWFs without serious reform, even if the current global benefits of OWFs do outweigh the localised negative impacts. Therefore, to improve the scope and quality of ecosystem-scale OWF research, developer cooperation and collaboration, and the application of more sophisticated research methods is required.

Solar and onshore wind power are now the cheapest new sources of electricity in at least two-thirds of the world’s population, further threatening the two fossil-fuel stalwarts – coal and natural gas.

The Cheapest Source of Electricity

The levelized cost of electricity for onshore wind projects has fallen 9% to $44 a megawatt-hour since the second half of last year. Solar declined 4% to $50 a megawatt-hour, according to a report Tuesday by BloombergNEF.

The prices are even lower in countries including the U.S., China and Brazil. Equipment costs have come down, technologies have improved and governments across the world have boosted clean-power targets as they seek to combat climate change. That could squeeze out coal and natural gas when utilities develop new power plants.

“Best-in-class solar and wind projects will be pushing below $20 per megawatt-hour this side of 2030,” Tifenn Brandily, an analyst at BNEF, said in a statement. “There are plenty of innovations in the pipeline that will drive down costs further.

Yet it remains unclear whether the coronavirus’ impact on coal and gas prices will erode the competitiveness of wind and solar. “If sustained, this could help shield fossil fuel generation for a while from the cost onslaught from renewables,” Seb Henbest, chief economist at BNEF, said in the statement.

A decade ago, solar was more than $300 a megawatt-hour and onshore wind exceeded $100 per megawatt-hour. Today, onshore wind is $37 in the U.S. and $30 in Brazil, while solar is $38 in China, the cheapest sources of new electricity in those countries.

Battery storage is also getting more competitive. The levelized cost of electricity for batteries has fallen to $150 a megawatt-hour, about half of what it was two years ago. That’s made it the cheapest new peaking-power technology in places that import gas, including Europe, China and Japan.

This story originally appeared in Bloomberg Green, written by Brian Eckhouse, and is republished here as a part of Earth.Org’s partnership with Covering Climate Now, a global collaboration of more than 250 news outlets to strengthen coverage of the climate story.

Global investment in offshore wind energy increased 319% in the first half of 2020 year-on-year despite the economic shock of the COVID-19 pandemic, with financing approved for 28 new offshore wind projects totaling USD$35 billion, more than what was approved in all of 2019, according to a report by Bloomberg NEF.

Albert Cheung, BNEF’s head of analysis, says, “We expected to see COVID-19 affecting renewable energy investment in the first half, via delays in the financing process and to some auction programs. There are signs of that in both solar and onshore wind, but the overall global figure has proved amazingly resilient- thanks to offshore wind.” 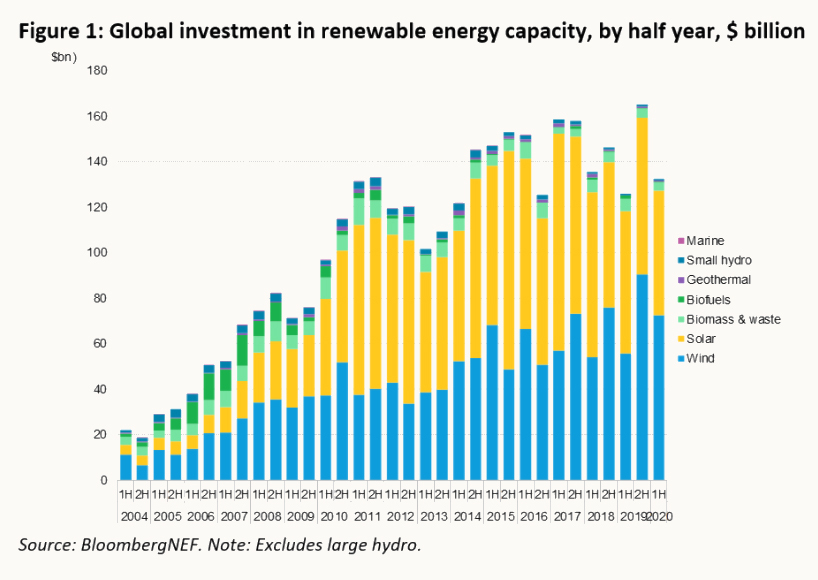 Tom Harries, head of wind energy analysis, credits this expansion to the rapid fall in cost- 67% since 2012- and a rush from China to finance and build projects before the country’s feed-in tariff expires next year.

In total, global investment in new renewable energy capacity (excluding large hydroelectric projects) reached $132 billion in the first half of 2020, a 5% increase from the same period last year. Onshore wind and solar investment dropped 21% and 12% respectively.