The Future of Solar Energy: A Regional Analysis 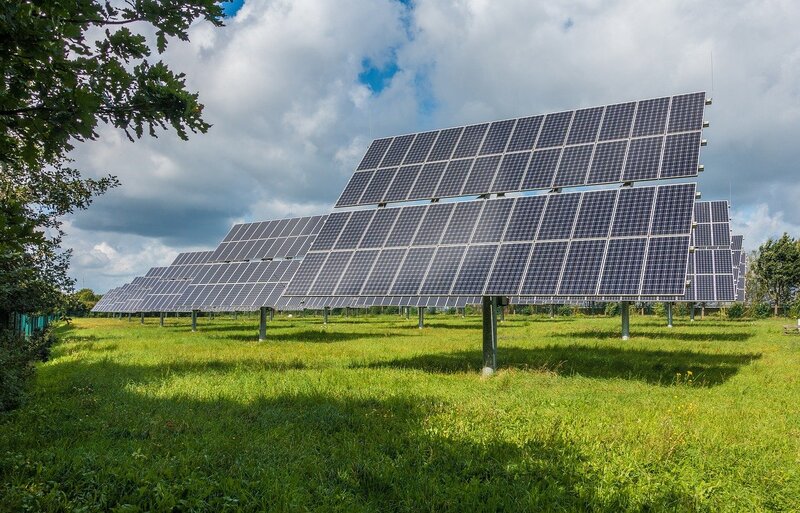 Since the Industrial Revolution in the 1760s, energy has been crucial to our survival. The burning of fossil fuels used to be our main source of energy, but shifting attitudes towards the need for a more sustainable future has caused a shift towards renewables, particularly solar energy. The share of fossil fuels in the global energy mix have typically exceeded 60%, however, since 2011, this percentage has been gradually dropping. In 2011, the share of electricity from fossil fuels was 67.56%. In 2020, this dropped to 60.95%. Of the many renewable energy sources, solar power has been on the rise in recent years. Globally, the utilisation of solar power has substantially increased; in 2020, the global average electricity production from solar power was 844.39TWh, a 231% increase from 254.67TWh in 2015. We look at where this shift to solar energy has been most pronounced.

Furthermore, the proportion of solar energy in the world’s energy mix has been increasing through the years. In 2010, solar energy represented only 0.06% of the global energy mix, which increased to 1.11% in 2019. The proportion of solar energy in the renewable energy mix has also increased substantially, from 0.8% in 2010 to 10.3% in 2019. However, this increase has not been uniform. Many developing countries- despite enjoying a geographical advantage- have not been utilising solar power as much compared to developed countries.

Solar power converts solar energy into electricity. Solar panels are installed to generate DC (Direct Current) electricity which is then converted into AC (Alternating Current) electricity to provide us with power. For a substantial amount of energy to be generated, a large amount of solar energy is required. With this in mind, developing countries should enjoy an advantage as many developing countries are located in regions where they have optimal access to the sun’s rays.

Most developing countries are located in tropical and subtropical regions, which are close to the equator, and therefore enjoy greater solar irradiance. This indicates that developing countries, especially those in the tropical and subtropical regions, should enjoy a greater potential in solar energy due to its geographical advantage.

This is reinforced in Figure 1 below, showing that tropical and subtropical regions enjoy a greater photovoltaic power potential, which refers to the estimated electricity that can be produced through solar energy. From the map, we can see that those countries in red to purple are those that enjoy the greatest potential from solar energy, and most, although not all, are developing countries. 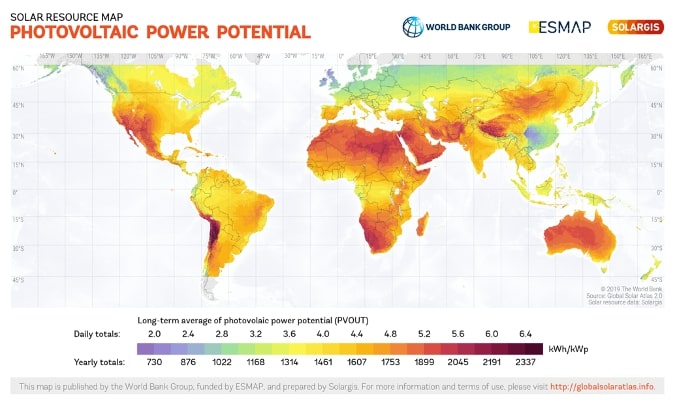 Developing countries should therefore be able to fully capture the benefits of solar power with its geographical advantage. Yet, that is not the case as shown in figure 2 below. Contrary to expectations, developed countries such as America, Australia and many European countries including Germany, Spain and France are the leaders in solar power generation. 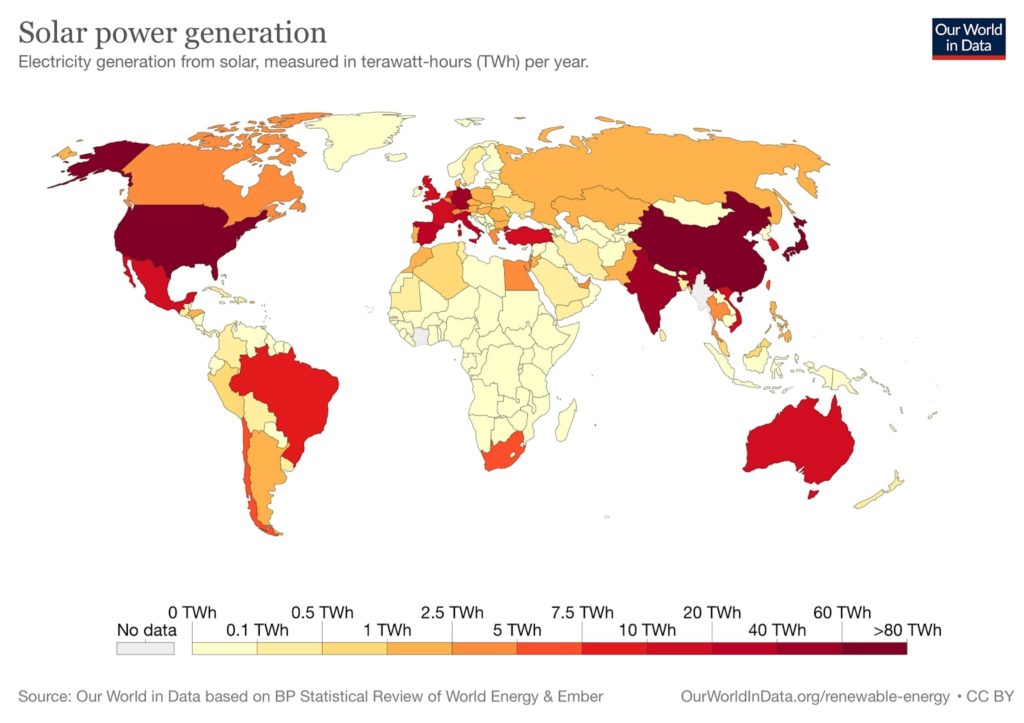 Why is this the case? One of the most crucial reasons is the priority for “developing” countries. Unlike developed countries that have already undergone economic development, developing countries are still “catching up” or breaking through. Developed countries rely heavily on their tertiary industry, which includes services such as retail, information technology, financial services, hospitality and leisure, communication etc. These economies require significantly less energy than developing countries, which are undergoing industrialisation.

The current issue with solar power is that it can only generate a limited amount of power due to its relatively low efficiency, and is also weather dependent. The low efficiency and output of solar power may be insufficient to deliver enough power to support developing countries’ manufacturing industries. It is important to note that to achieve economic development, the performance of manufacturing industries, or the secondary sector, is a crucial factor. Thus, many developing countries prioritise development over environmental concerns.

Furthermore, developing countries also face numerous obstacles that prevent them from utilising solar power fully. Firstly, from an economic perspective, even though the price of solar energy technologies has decreased rapidly in recent years, its efficiency is still relatively low compared to fossil fuels. For the same price invested towards fossil fuel and solar energy, fossil fuels can still produce more energy as its efficiency is higher. As mentioned above, developing countries value energy production highly to support its industries, and would prefer an energy source with high efficiency and low cost.

Moreover, developing countries face constraints in terms of adequate access to finances, especially in their investment costs. Most developing countries still lack specific policies or regulations, which hinders the adoption of solar energy systems. This results in the increase in capital costs for developers and investors, and financial institutions may be reluctant to finance long-term solar power projects due to possible uncertainties.

Developing countries also often have a poorly skilled workforce and lack the technical expertise and knowledge to install and maintain solar technologies. This is due to the absence of established vocational and technical training centres, and insufficient R&D. Qualified engineers often need to be brought into the country to help install or maintain the energy systems, or to educate the local workforce, increasing the cost of establishing solar energy. Such factors are often highlighted by researchers as one of the significant barriers to the establishment of solar energy.

Additionally, the price of fossil fuels are still considerably low due to the abundance of reserves in developing countries. In November 2019, the global crude oil price was US$56.83 per barrel, a significant decrease from US$118.71 in 2011. The exploration of more oil reserves and the discovery of shale gas, along with new extraction techniques such as fracking has provided a cheaper alternative for developing countries.

The shale gas boom was a “revolution” in the USA in the natural gas industry, and has spread across the world. It started in 2007, and by 2010, shale gas constituted 23% of the USA’s total gas production. The discovery of shale gas has led to ease of access of a new and vast resource.

Moreover, the technique of fracking resulted in the ability to extract the gas in mass quantities and at a low cost. Although the cost of solar power has continued to decrease, the sudden attractiveness of shale gas has strongly captivated developing countries. Therefore, overcoming the appeal of shale gas may be another barrier in the development of solar power in developing countries.

Next, from a societal perspective, developing countries often lack the infrastructure, technology and skilled workforce to fully exploit the potential of solar power. Although rich in solar power, developing countries lack appropriate physical infrastructure for solar power systems to be established. Furthermore, infrastructures of poor quality such as the lack of well-built and established roads becomes a significant problem. This results in an increase of transportation costs, such as more time needed to transport the equipment and manpower etc. The lack of infrastructure suggests the need for big initial investments, and such investments increase the cost in providing solar energy, especially during the initial years.

Developing countries already have the greatest asset of the natural resource at hand but whether they can fully capture this advantage will be the thing to look out for in the near future. As former United States Secretary of the Interior, Ken Salazar suggests, “I think the future for solar energy is bright.”