The Mission to Save Vietnam’s Bears from Bear Bile Farming 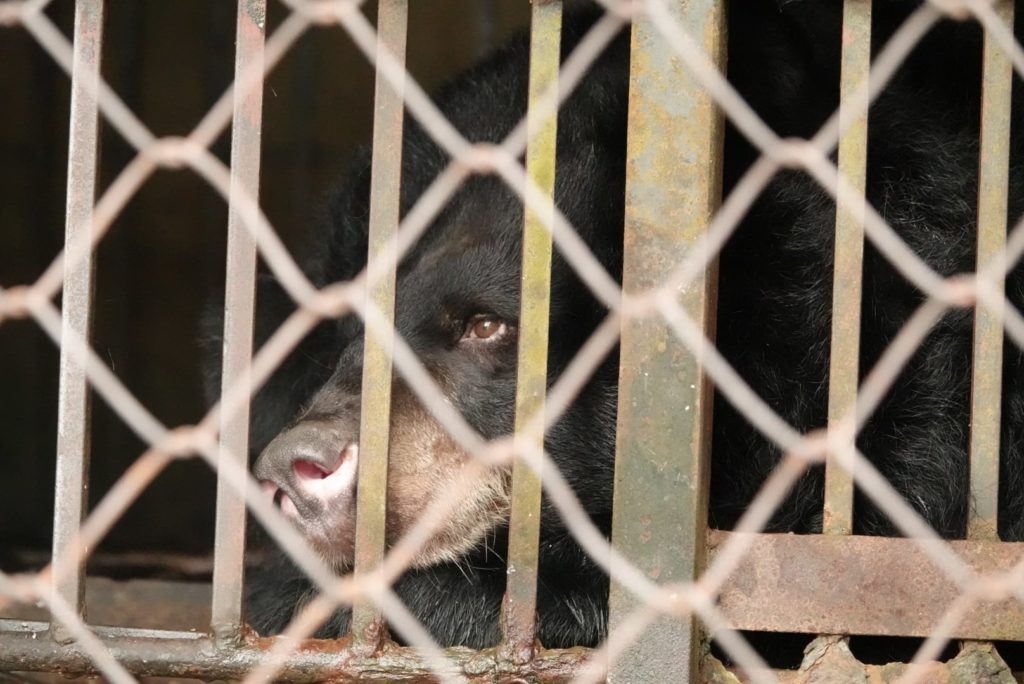 Animals Asia is an animal welfare and rescue organisation that is devoted to ending bear bile farming and improving the welfare of animals across Asia.

Founded by British-born Jill Robinson in 1998, Animals Asia has rescued over 600 bears and runs two award-winning sanctuaries in Vietnam and China. It is on the cusp of ending bear bile farming in Vietnam after 25 years of campaigning, raising awareness of the suffering of bears on bile farms, and promoting alternatives to bear bile.

The charity’s values of tenacity, respect, empathy, and courage underpin every interaction they have whether with a government official, traditional medicine practitioner or consumer of bear bile. And it has paid off: in 2017 the Vietnamese government signed an historic Memorandum of Understanding with Animals Asia agreeing to end bear bile farming in the country once and for all.

Animals Asia is about to break ground on their third sanctuary to house the remaining bears on bile farms in Vietnam. Their mission – and promise – is to leave no bear behind. Join them today by raising your paw for the ‘Moon Bear Pledge’ and be one of a million strong voices to support the rescue of every last bear in Vietnam from bile farming.

The Moment Everything Changed

In 1993, Jill Robinson was working for an animal welfare charity when she visited a bear bile farm as part of an investigation into the industry.

What she experienced that day changed her life and the lives of hundreds of bears forever.

She entered a dark room filled with rows of tiny, rusty cages containing Asiatic black bears, also known as moon bears because of the moon-shaped crescent on their chests.

She recalls, “As I walked around in shock, looking at bears with scarred and skeletal bodies, smashed teeth, and abdomens pierced with metal catheters, something brushed my shoulder.”

“Turning around, I came face to face with a bear who had reached out to me through her cage. It was reckless but my natural response was to hold her paw. Instead of lashing out, instead of swiping with those razor-sharp claws, she simply squeezed my fingers, ” Robinson described.

Robinson knew there and then that she had to do something, and five years later, Animals Asia was founded with a mission to end bear bile farming. The charity built a bear sanctuary in China and began collaborating with the authorities and rescuing bears from illegal bile farms.

A sanctuary in Vietnam followed soon after and since then, the charity has rescued over 600 bears and won global recognition and awards for, as GFAS Director Jackie Bennett put it, “showing what true sanctuary really means.” 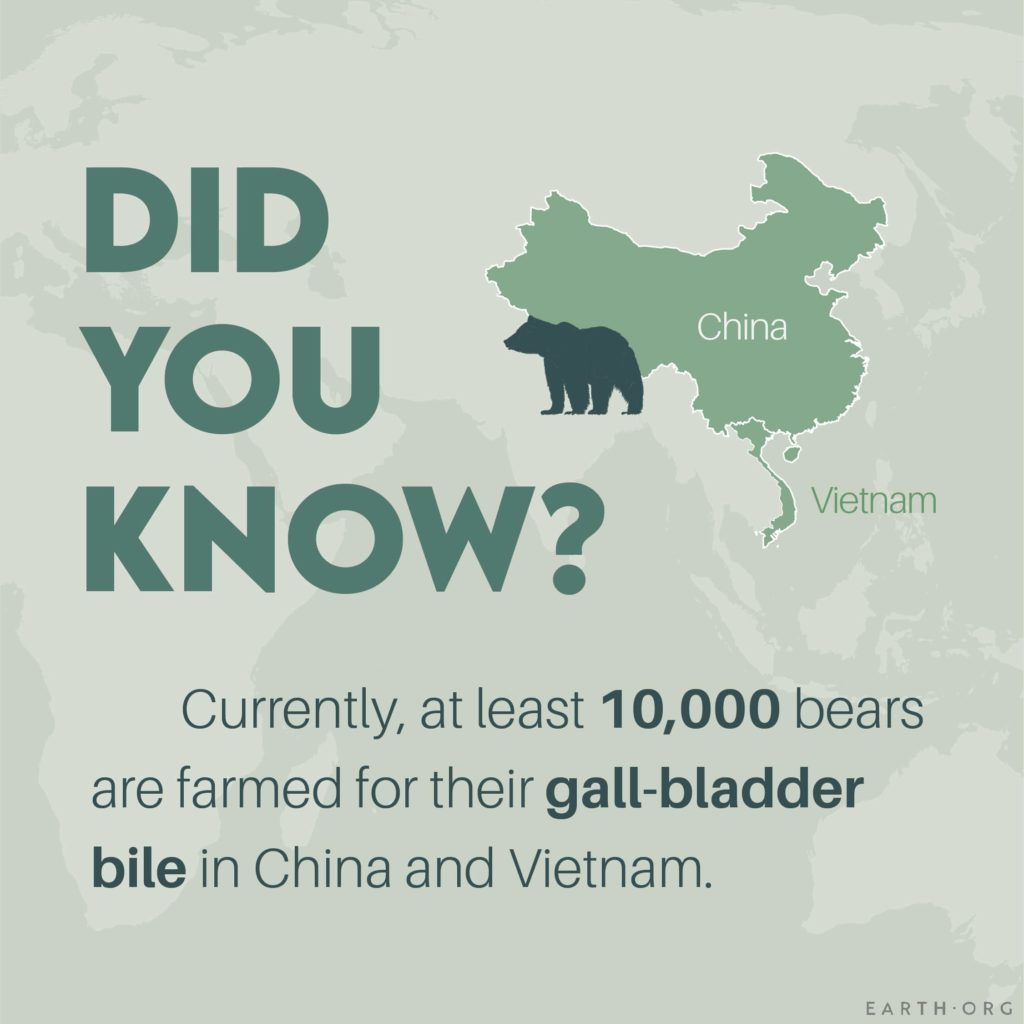 Bear bile, mostly taken from moon bears but sometimes sun bears and brown bears, has been used in traditional Asian medicine for thousands of years. It contains high levels of ursodeoxycholic acid (UDCA) known to be useful for treating liver and gallbladder conditions in humans.

In the past, bear bile was obtained by hunting, killing, and removing bears’ gall bladders in the wild. In the 1980s, people began to keep bears for the duration of their lives – up to 30 years – to continually extract bile, and bear farms sprang up across Asia.

Today, bears are bred on farms or poached from the wild as cubs where they’re likely to witness their mothers being killed as they try to protect them.

Bear bile farming has been illegal in Vietnam since 1992 but has persisted due to legal loopholes and continued demand. Today, at least 10,000 bears are held captive on bile farms across Asia, between 300-400 of those are in Vietnam.

Bear bile farming is as invasive, painful and traumatic as you probably imagine and causes physical and psychological suffering and myriad health problems.

A number of extraction techniques exist, ranging from the “free drip” method where the bear suffers a hole in their abdomen and gallbladder which is continuously reopened, to the insertion of permanent catheters, to locating the gall bladder via ultrasound and extracting bile through a four-inch needle.

Bile farm bears live and grow up in tiny cages to the point where their bodies have contorted to fit the bars. Most have missing or damaged teeth from trying to gnaw their way out and are starved and dehydrated to encourage bile production.

This suffering is not only inhumane, but also needless. There are over 50 synthetic and herbal alternatives to bear bile which have been proved effective. Traditional medicine practitioners agree that nobody’s health will suffer from a lack of bear bile.

Bear Bile Farming and Its Impact on Bear Populations

Since bear bile farming became common practice in the 1980s, wild populations of moon bears and sun bears have been decimated to meet the demand the industry created.

A 2016 report by Animals Asia and Free The Bears found that wild populations across South East Asia had fallen dramatically with precious few pockets of wild bears existing today.

Moon and sun bears, according to the International Union for Conservation of Nature (IUCN)’s red list of endangered species, are “vulnerable”, with populations fast declining. It cites the hunting of moon bears for their “skin, paws and especially gall bladders” as “one of the main threats to this species” and the hunting and trading of body parts as “one of the two most serious threats to sun bear populations.”

A Respectful, Empathetic and Tenacious Approach

Although bear bile farming was outlawed in Vietnam in 1992, bears on bile farms were not confiscated, so remained where they were. With a lack of enforcement and continued demand, the industry continued under the radar.

Robinson knew that to have any chance of ending the industry, she would have to gain the trust and respect of the authorities, the traditional medical community, farmers, and consumers. Not easy for an outsider from the west.

Animals Asia began a long-term campaign to educate those who relied on bear bile farming of the harm it did to these sentient beings and reassure them that there were cruelty-free ways to make a living and to be treated when sick.

This steadfast, holistic, and collaborative approach has proven to be incredibly effective and successful, with official surveys and anecdotal evidence finding the majority of the Vietnamese population is against bear bile farming and want it to end. Official bodies began to listen too, and in 2015 the Vietnamese Traditional Medicine Association signed an agreement with Animals Asia to stop prescribing bear bile by 2020.

And then, in 2017 after years of careful negotiation, the Vietnam government agreed to end bear bile farming once and for all and signed an historic Memorandum of Understanding (MoU) with Animals Asia, naming the charity their official partner in bringing the industry to a close. 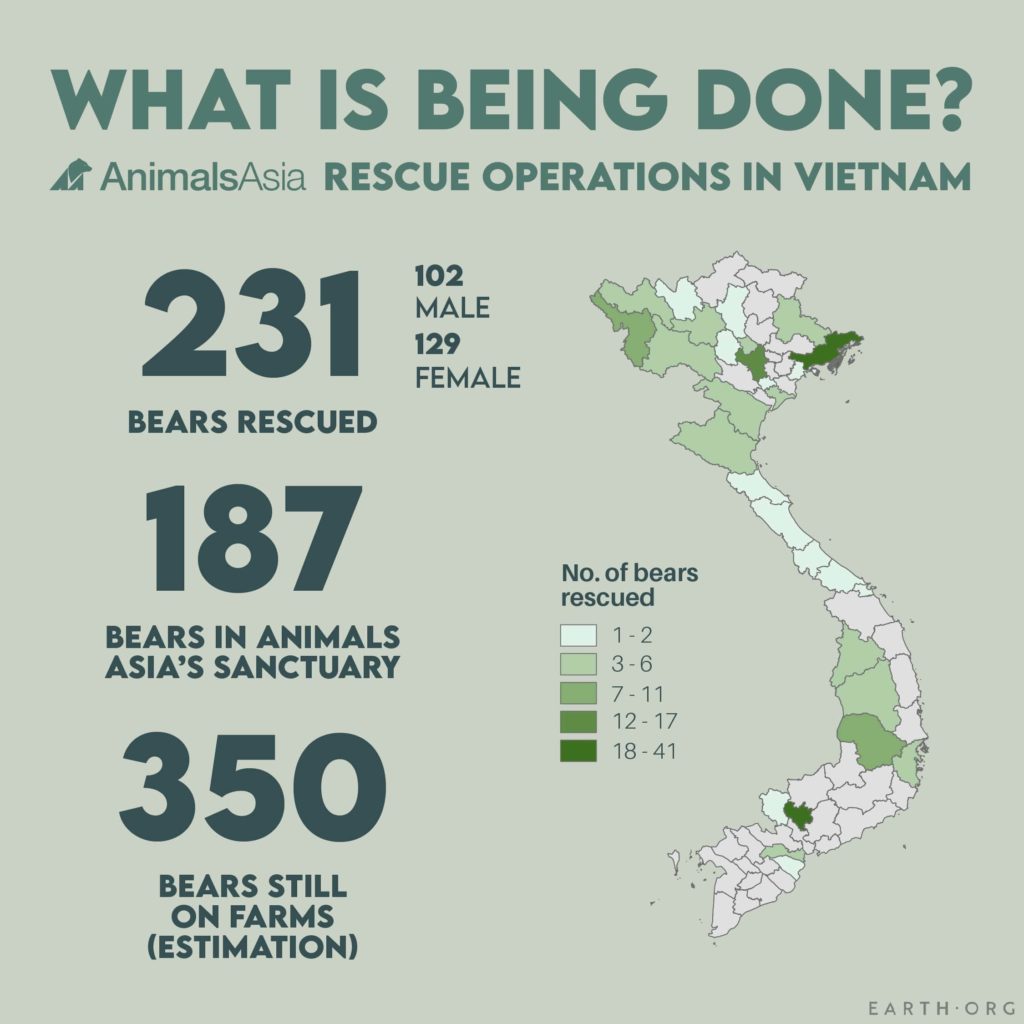 The End of Bear Bile Farming in Vietnam

This momentous and historic agreement with the Vietnamese government was the beginning of the end for bear bile farming in the country. But the hard work had only just begun.

Animals Asia’s current sanctuary in Tam Dao, Vietnam, was almost at full capacity. A new sanctuary needed to be built before they could start rescuing the 300-400 bears who remained on farms, and staff recruited and trained to look after the bears for the rest of their lives.

At the time of publication, Animals Asia is about to break ground on their new sanctuary. This 12-hectare sanctuary will sit within the beautiful, mountainous surroundings of the Bach Ma National Park in central Vietnam and will eventually be home to the bears who still remain on bile farms.

This new sanctuary not only heralds the end of bear bile farming in Vietnam but symbolises the Vietnamese government’s commitment to preserving wild moon and sun bear populations. As Tuan Bendixsen, Animals Asia’s Vietnam Director explained, “In signing the MoU the government has shown it is serious about conserving the country’s remaining wild bears and protecting the heritage of future generations.”

But maybe most exciting of all, the government’s acknowledgement that bear bile farming harms individual bears and their wild populations could influence and motivate other countries to not only reconsider their use of bear bile but also their treatment of all sentient beings and the myriad ways they are utilised for our benefit.

Raise your paw today to join a number of renowned actors, artists and environmentalists and be one of a million voices that promises to leave no bear behind.

Learn more about the Moon Bear Pledge below:

Animals Asia is devoted to ending bear bile farming and improving the welfare of animals across Asia. We promote compassion and respect for all animals and work to bring about long-term change. Founded in 1998, the Animals Asia team has been rescuing bears since 1994. We operate award-winning bear rescue sanctuaries in China and Vietnam, and we are the only organisation with a bear sanctuary in China. Our founder and CEO, Jill Robinson MBE, Dr.med.vet. h.c., Hon LLD is widely recognised as the world’s leading authority on the cruel bear bile industry, having campaigned against it since 1993.