Pangolins: The World’s Most Trafficked Mammals Slipping Into Extinction 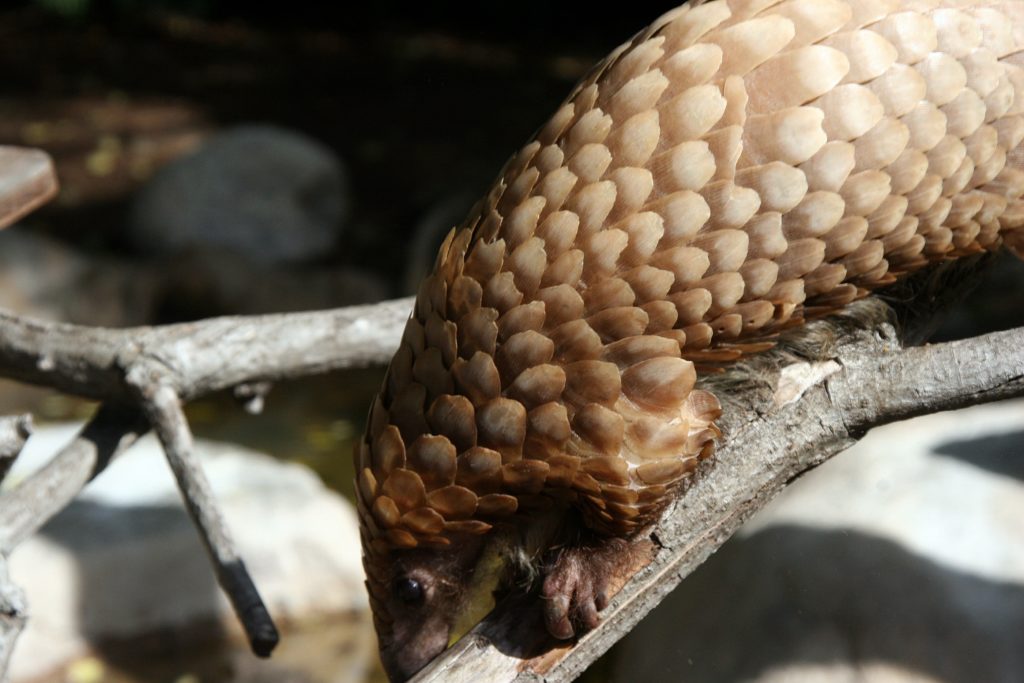 Pangolins are the world’s most trafficked mammals, but they remain relatively unknown; for most, the thought of wildlife crime instead brings to mind ivory and rhino horns.

An animal ranging from the size of a common house cat to a medium-sized dog, but covered in hundreds of scales and found only in Asia and Sub-Saharan Africa, their defence of rolling up into a ball of hardy scales is aptly designed for protection against their natural predators- big cats. But this defence mechanism is far from a deterrent for humans. All eight species of pangolins are at risk of extinction, driven by the thriving illegal trade of its scales and meat used in traditional Asian medicine and dishes.

The illegal wildlife trade has popular trafficking routes that span across the globe, many of which use Hong Kong as an entry point into China. In the four-year period between 2013-2017, the Hong Kong Customs and Excise Department found over 43 metric tonnes of pangolin scales and carcasses. The seizure is estimated to represent 96,330 pangolins at an estimated market value of HK$93.9 million.

All pangolin species have been legally protected by an international agreement between governments in 2016 as part of the Convention on International Trade in Endangered Species of Wild Fauna and Flora (CITES), aiming to ensure the trade of the animal doesn’t threaten its survival.

Despite the ban, the latest seizure in January 2019 by the Hong Kong authorities was record high with over eight tonnes of pangolin scales and two tonnes of elephant tusks discovered in the same shipping container, with an estimated combined market value of about HK$62 million.

Why are pangolins trafficked?

Associate Professor at Hong Kong University (HKU) Amanda Whitfort explains that all eight species of pangolin are in high demand for traditional Chinese medicine in China. “Hong Kong is the fifth busiest container port in the world and only about 1% of our containers are inspected. Given the low risk of detection it is not surprising that we are used by traffickers seeking an easy gateway to China.”

Currently, wildlife trafficking offences are listed under legislation aimed to protect endangered species of animals and plants in Hong Kong: Cap.586. However, many have pushed for it to be now listed as under the Organised and Serious Crime Ordinance (OSCO). Whitfort says that this legislation change would allow investigators to use more coercive powers when investigating wildlife crime operations.

Alexandra Andersson, founder of the conservation group Hong Kong for Pangolins, also stresses the importance of listing wildlife offences under OSCO, saying that the Hong Kong government needs to “increase associated penalties, close various loopholes in the law, and work with forensic scientists to develop tools to detect laundering.”

In traditional Chinese medicine, some practitioners prescribe pangolin scales to cure ailments from rheumatism, soreness and itchiness to cancer and impotence. However, activists like Andersson argue that scales are proven to be made of keratin, the substance of human fingernails.

In 2008 a global NGO focused on illegal wildlife trade, TRAFFIC, found that pangolin scale alternatives include Wang Bu Lui Xing (Vaccaraie semen) and dried seeds of cowherb (Vaccaria segetalis). Within the study it was found that the medicinal effects of both alternatives were classed as being equally as effective as pangolin scales.

Alarmingly, there is a substantial lack of both knowledge and awareness regarding the pangolin and its legality. A survey of 1000 Hong Kong residents completed by Hong Kong for Pangolins, the Humane Society International and HKU found that 27.1% of the residents surveyed did not know if it was legal to consume pangolin meat or believed it was legal (it is illegal), and nearly half of those surveyed were confused about the legality of the pangolin scale consumption.

In a separate study WildAid also discovered that in China pangolin meat was largely consumed because it is a “expensive status symbol” and an “exotic wild animal”, even though 74% of respondents believed consuming pangolin meat is illegal.

The steep decline in global pangolin numbers has led to some scientists advocating for the captive breeding of pangolins, but studies shows they are not suited to living in captivity, with most wild individuals dying within 200 days. The Kadoorie Farm & Botanic Garden (KFBG) in Hong Kong undertakes species conservation and ecosystem restoration, in doing so they cared for a small number of pangolins before successfully releasing them back into the wild in Hong Kong.

KFBG believes that Hong Kong is in a position to play a critical role in the conservation of pangolins globally saying “the role our territory plays as a smuggling route used to funnel globally poached pangolin products to the main consumers is significant. Clamping down on illegal pangolin smuggling in Hong Kong could have a global scale effect.”

Pressure to curb illegal wildlife trade  is growing fast. Academics and activists alike say that Hong Kong’s wildlife offences need to be moved from Cap.586 to OSCO if legislation and enforcement mechanisms are to be made more effective in combating  illegal pangolin trade.

“Eventually we will have the correct laws,” Whitfort says. “Unfortunately, for some species, those laws will come too late.”