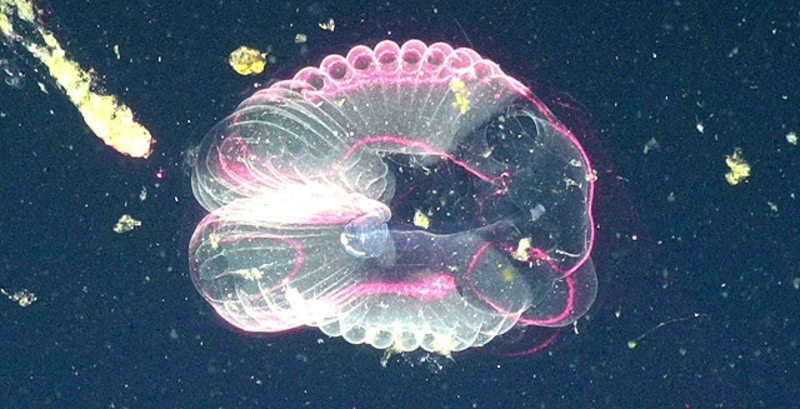 New laser technology has been developed to allow scientists to look into the internal structures of giant larvaceans, deep-sea marine animals that are vital in ocean ecosystems. These animals have mucus, or “snot houses,” that inadvertently contribute to the ocean carbon cycle and microplastic transport in the deep sea environment. How does this small creature play a role in filtering tiny plastic particles and assisting in carbon sequestration?

Giant larvaceans are planktonic marine invertebrates in the open ocean. They can be as large as 10 centimeters in size, while the house can extend itself to 1 meter.

It has been discovered that many gelatinous animals build balloon-like mucous structures called “houses,” which concentrate food by filtering tiny particles out of the surrounding seawater, as much as 21 gallons of water per hour. These particles contain organic carbon, some of which come from the atmosphere as carbon dioxide. These structures eventually become overloaded with particles- usually every 24 hours- and the larvacean abandons its house. This house then sinks to the seafloor, where it is consumed by animals or buried. The buried carbon is unlikely to return to the atmosphere for millions of years. In this way, they play a significant role in moving carbon from the upper part of the ocean into the deep sea.

It has previously been challenging to make in-situ long-term observations of these species in the midwater ocean since they are too fragile to capture with plankton nets. Scientists have adopted new laser technology to reconstruct 3-D images of the interior structure of the giant larvacean, which show the mucous house morphology, and how they feed themselves by regulating the incoming water flow and concentrating particles using their “houses.”

How long this mucous filter lasts depends on the size of the larvacean, but giant larvaceans typically build a new house daily. The filtration of the house is highly efficient. During the spring months, when they are most abundant, larvaceans surveyed in Monterey Bay were able to filter the water between 100 and 300 meters in the Bay in as little as 13 days, the equivalent of 500 Olympic-sized swimming pools per hour.

This creature has also been found to filter microplastics in water.

Giant larvaceans are an important part of the biological pump in the ocean, or the ocean carbon cycle. Their houses contain carbon and when they abandon them, they are transported from the near-surface waters to the deep sea benthos, bringing the carbon down with it. This process is responsible for as much as one-third of the carbon flux from surface waters to the deep ocean.

Given that microplastics have become very prevalent in the ocean, some marine organisms may serve as a biological vector that incorporates microplastic into the food web. Scientists observed that giant larvaceans also ingest microplastic particles, but they are capable of rejecting microplastics due to the low nutritious value. When they abandon their mucous filters, they travel quickly to the seafloor, at a rate of about 800 meters a day.

Ecological Function of the Snot House

The larvacean’s ability to sequester carbon and lock it away is another example of a vital ecosystem service that inhabitants of the oceans perform in maintaining the ocean carbon cycle. Warming oceans as a result of the climate crisis will affect these- and other- creatures’ ability to continue to perform these services. These creatures can also teach scientists new ways to design filters or expandable structures that perform similar jobs as larvaceans.