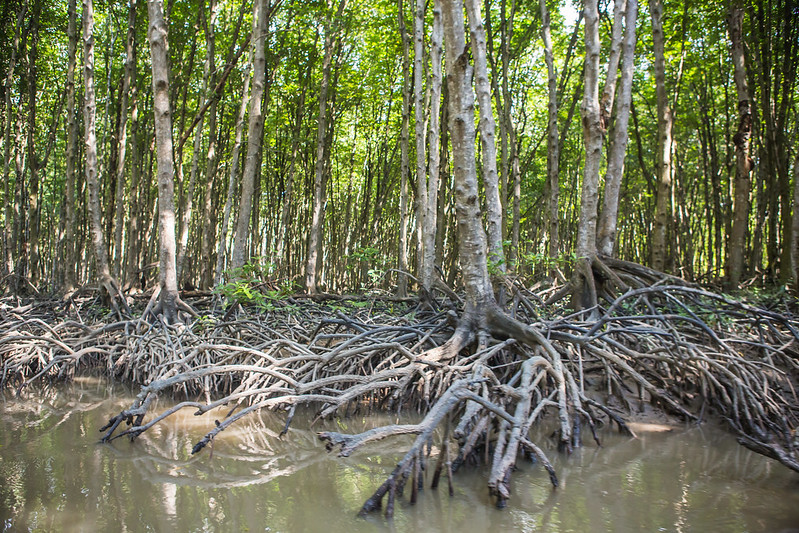 A $9.3 billion residential and tourism development has been approved within the buffer zone of the Can Gio Mangrove Biosphere Reserve here in this city of 13 million, the largest urban area in Vietnam. The project was proposed by the Can Gio Tourism Urban Area Joint Stock Company, a subsidiary of Vinhomes, the real estate arm of Vingroup, the country’s largest private company. The Can Gio Tourist City would span 2,870 hectares (7,100 acres), largely on land that would be filled in along the South China Sea coast using sand.

The 75,740-hectare (187,200-acre) reserve was established in 2000 and is overseen by a local management board. Home to one of the world’s largest rehabilitated mangrove forests, it protects the area from storm surges while also acting as a “green lung” for a heavily industrialised region.

The projected completion date for the Vinhomes development is 2031, when planners expect 230,000 people will live there long-term, and about 9 million tourists will come and go annually. In comparison, just over 70,000 people currently live in Can Gio (pronounced similarly to ‘yo’), the largest of Ho Chi Minh City’s 24 districts by area.

Tourism development in Can Gio has been relatively slow, as the region can only be reached by ferry, but construction of a huge bridge linking the district to the rest of Ho Chi Minh City is expected to begin in 2022, making it easier to reach.

The response to the approval of the “tourist city,” which was first proposed in 2000 but was stalled until Vinhomes took over the project, has been largely negative. The company increased its original planned size from 821 hectares (2,030 acres) to 2,870 hectares.

In early July, 23 prominent environmentalists, academics and researchers sent a petition calling for an independent assessment of the project to Prime Minister Nguyen Xuan Phuc, the People’s Committee of Ho Chi Minh City, the legislative National Assembly, and other government bodies. It is rare for Vingroup to be publicly criticised in Vietnam, as the company is known to react aggressively to such complaints.

An English-language version of the petition shared with Mongabay says the planned development “poses a serious threat on the Can Gio mangrove forest, which in turn may lead to a series of harm to the urban regions of HCMC, whose population and authority are already facing major environmental challenges such as pollution, floods and land collapses.”

The petition is now online, in both English and Vietnamese, and had been signed by more than 5,900 people at the time of writing. It adds that the project poses huge threats related to erosion, flooding and water stagnation, all of which could have serious environmental and social impacts, while also threatening the integrity of Can Gio’s unique, important mangrove ecosystem.

The Nikkei Asia Review reports that 138 million cubic meters (4.9 billion cubic feet) of sand would be needed to reclaim land for the project. Some media reports have said this sand would be dredged from the nearby Mekong Delta, which is already facing serious subsidence due to sand mining and a loss of sediment caused by upstream dams. None of the activists contacted for this story would speak on the record, even anonymously, for fear of retaliation from Vingroup or the police. One environmentalist said they had been repeatedly harassed by the police for their outspoken criticism of the project on Facebook.

Vocal activists can face serious consequences for their actions here. In 2017, an environmental blogger known as Mother Mushroom was sentenced to 10 years in prison for “conducting propaganda against the state” following a major environmental disaster. She was eventually released early and now lives in exile in Houston.

Vingroup did not respond to requests for comment on the project.

While detailed plans of Can Gio Tourist City aren’t public, one satellite rendering shared widely on social media shows a huge stretch of land, including a large artificial lake, tacked on to the southern end of Can Gio, where the district meets the East Sea, as the South China Sea is known here.

This means there would not be construction within the heavily restricted core area of the mangrove biosphere reserve.

However, it is a delicate ecosystem.

“Mangroves in general are highly sensitive to changes in hydrology and sedimentation,” said Marie Arnaud, a research fellow at the University of Birmingham who has conducted extensive research on Can Gio. “For example, if you decrease sediment supply, then you might have erosion of the mangrove’s land, which can cause mangrove loss. It has been observed in many parts of the world, mostly due to upstream sand mining, but it has also been observed from areas which have been dredged.”

The Vinhomes development would be downstream from the mangroves, but it is not clear where the sand used to reclaim land will come from. Adding thousands of hectares of land just a few miles from the reserve will have an impact.

“If they dredge sand to create land or build, they’ll hurt the sedimentation and the hydrology of the mangroves,” Arnaud said. “Then, those buildings are static, while normally this area is quite dynamic. This means that there will be sand accumulation in some spots, but also places where the soil will be eroded because the dynamic is moving.”

Some supporters of the plan have noted that it will not be located within the mangrove reserve’s core, but Marc Goichot, WWF freshwater lead for Asia Pacific, says this doesn’t mean it makes sense.

“If it’s closer to the coast, it’s not necessarily better because again, it’s dynamic,” he said. “If the area is a marsh or partially or completely on the water, then they’re going to dredge material out from the riverbed, which will starve the coast of its replacement sediment and put at risk the entire existing system.”

He went on: “Even if they bring material in from far away, which they probably won’t because it would be expensive, then you’re burying the area and changing the ecosystem completely, and the dynamic of currents and the movement of nutrients.”

This would impact fisheries and aquatic life in the area. The huge number of people that the Can Gio Tourist City would attract, meanwhile, will also create problems.

“This might induce pressure on local fish, crabs and bivalves,” Arnaud said. “People from [central] Ho Chi Minh City like to go to Can Gio to eat seafood because it’s cheaper, but if so many come it might really decrease the density of the fauna. And if people are not sensible, you’ll have a lot of plastic pollution, and possibly sewage runoff as well.”

Then there is the placement of the development, directly on the coast.

“This project will be high-risk,” Arnaud added. “With climate change, you have storms that are becoming more frequent and stronger, you have sea level rise, and this touristic spot will be at the front of all of this.”

This article was originally published on Mongabay, written by Tim Rist, and is republished here as part of an editorial partnership with Earth.Org.