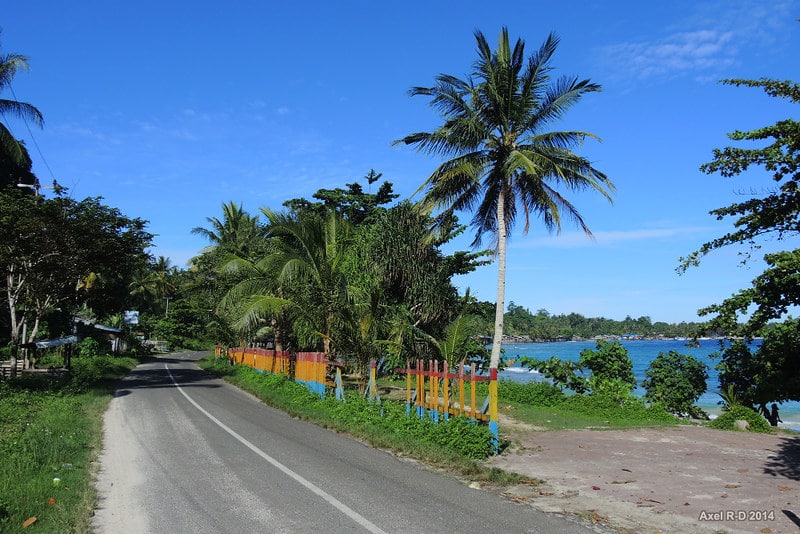 Palm oil licenses covering concessions twice the size of Los Angeles have been rescinded by the local government in Indonesia’s West Papua province due to violations by the license holders.

The move follows on from a recent license review, carried out by the West Papua government working with the national anti-corruption agency, the KPK, and NGO EcoNusa. The review of 24 oil palm license holders in the province found widespread administrative and legal violations.

The review recommended the revocation of permits for 12 concessions in five districts in the province, which together span 267,857 hectares (661,889 acres). Three-fifths of this area is still forested.

Nine of the 12 concession holders lacked a right-to-cultivate permit, or HGU — the last in a series of licenses that oil palm companies must obtain before being allowed to start planting. That means they hadn’t started clearing the area by the time they were supposed to, which is an administrative violation.

The three other concession holders were similarly found not to have all the required permits, or to be operating with expired permits.

You might also like: New Survey Shows That Hong Kong is Turning its Back on Shark Fin Soup, Embracing a More Sustainable Future

‘Where Will We Live?’

The anti-graft agency, the KPK, which worked together with the West Papua government on the review, lauded the latter’s move to revoke the licenses, saying it’s important to protect intact rainforests that are still standing in the concessions.

“We don’t want what has happened in other islands to also happen in the land of Papua,” Dian Patria, the KPK’s regional coordinator for graft prevention coordination and supervision, said at a press conference in Jakarta.

The license revocation occurred after years of struggle by Indigenous communities in West Papua to get their land rights recognised and defend their territories from palm oil companies.

On May 20, more than 200 Indigenous residents marched to the office of the South Sorong district head in a protest against palm oil companies and to demand the government to follow up on the license review.

“Today, we from the Tehit Indigenous tribe come here to reject palm oil companies,” said protest leader Yuliana Kedemes. “We don’t allow them [to come here] because where would our children and grandchildren live in the future? So we’re asking the government to revoke the palm oil licenses.”

Pusaka, an NGO that works with Indigenous communities across Indonesia, welcomed the provincial government’s decision to revoke the licenses, calling it a step in the right direction in recognising the rights and meeting the needs of Indigenous peoples in West Papua.

“The policy to revoke companies’ licenses is the right legal effort to end social and economic injustice as well as for a sustainable forest management,” the NGO said in a press release.

However, the license revocation alone is not enough, according to the KPK’s Dian.

“Of course this doesn’t stop at permit revocation. The most important thing is what’s next?” he said.

Even if the concession holders have been stripped of their licenses, the government can simply reissue them to other companies.

“Don’t let [this] happen,” Dian said. “We’re hoping and pushing for lands that used to be concessions to be beneficial for the people.”

Franky Samperante, the director of Pusaka, said there had been cases where local governments revoked old licenses only to issue new ones to other investors without careful consideration and without proper participation of Indigenous communities. He cited the case of palm oil licenses in the Tanah Merah project in neighbouring Papua province’s Boven Digoel district.

The project, riddled with controversies and irregularities, is a vast area divided into seven concessions that are collectively earmarked to become the world’s largest oil palm plantation. The project has seen the licenses for the previous owners of the seven concessions revoked by the local government on the grounds that the companies had failed to begin operating.

But shortly after that, the government issued new licenses to new investors in the same area.

“So while there’s a policy to revoke the licenses, there’s no commitment [from the government] to manage [the forests sustainably], and thus new permits were immediately issued to new companies,” Franky told Mongabay. “That’s our concern” about what could happen in West Papua, he added.

And since the government can easily issue new licenses, the forests within these concessions are still at risk, he said. Therefore, the government should follow up on the permit revocation by recognising the rights of Indigenous peoples who live in the concession areas to allow them to manage the forests for their livelihoods, Franky said.

“Until now, whenever there’s a permit revocation, it’s unclear what will happen to the forests,” he said. 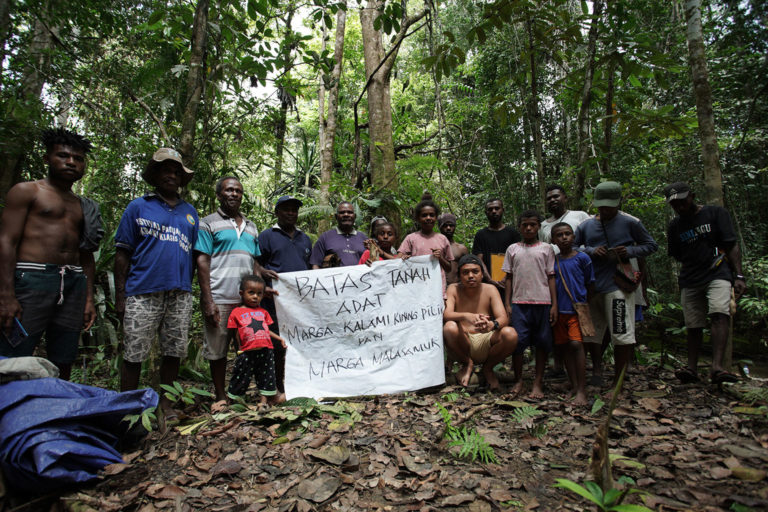 EcoNusa working with an Indigenous community in Malaumkarta in Sorong, West Papua to map their traditional lands. Photo credit: EcoNusa

Franky said the recognition of Indigenous rights should also be a part of wider efforts to improve the management of the palm oil industry.

Yacob Fonataba, the head of the West Papua provincial plantations department, said the local government is serious about addressing those shortcomings, and pledged that the Boven Digoel case would not repeat itself in West Papua.

He said the government had committed to protecting the province’s remaining rainforests and to give Indigenous peoples greater access to their lands through various initiatives, such as the declaration of West Papua as the world’s first “conservation province” in 2015 and the signing of the Manokwari Declaration in 2018.

The Manokwari Declaration, named after the provincial capital, changes the province’s development framework from “conservation” to “sustainable development.” It entails a review of the region’s zoning plans to more accurately record claims by Indigenous communities to the forests they inhabit, as well as a review of all current land concessions for agribusiness, logging and mining.

In 2018, only 36% of West Papua province was zoned as protected land, while the rest was available for development. Under the Manokwari Declaration, the government aims to set aside 70% of the province as protected or conservation areas.

“We have committed with [existing] regulations which say that if palm oil concessions don’t meet requirements, we will take them back and collaborate with stakeholders and Indigenous peoples to manage them,” Yacob said at a press conference. “Our spatial plan has determined 70% of our territories to be protected forests. This will be locked and won’t be bothered.”

He told Mongabay he would guarantee no new licenses for the revoked concessions would be issued to other companies. “But that’s going to depend on each district head. It’s going to be difficult [for them] to issue new permits because all eyes are on them,” he said.

The KPK’s Dian said ensuring that West Papua’s forests are truly protected would require similar action to be applied to other industries, including logging and mining.

“We need to expand and provide forest maps by coordinating with mining. We can’t only talk about palm oil,” he said. “The hope is to have a zoning and monitoring system.”

Having revoked the 12 permits, the West Papua government is now looking to revoke four more. Two are for concessions in South Sorong district, and the others are in Maybrat district and South Manokwari district.

“The decrees to revoke these concession permits have been finalised and are now waiting to be signed by the authority,” Yacob said.

The rest of the 24 concession holders that were the subject of the earlier review will likely be allowed to keep operating, after being issued warnings and required to address any violations, Benidiktus said.

“They will be [further] evaluated,” he said. “There will be warnings so that [their concessions] aren’t abandoned. If [they do] not [cultivate their concessions], their lands will be declared as abandoned by the land agency, and that will be a long and costly process.”

To ensure that Indigenous peoples will be able to get access to the land covered by the revoked concessions, the government will propose various schemes, Benidiktus said.

One proposal is to turn the revoked concessions into agricultural plantations under the national government’s “food estate” program, according to Yacob. He said it was important that the program, aimed at boosting domestic production of staple foods, be established in West Papua, given that the province’s rice harvest is insufficient to meet local demand.

Yacob said this option would only apply to those areas of the revoked concessions that had already been cleared and degazetted as forest. Areas with standing forest will be left undisturbed, he said.

But activists have criticised the plan to set up an outpost of the food estate program in West Papua. They liken the program to the failed Merauke Integrated Food and Energy Estate (MIFEE), initiated by former president Susilo Bambang Yudhoyono in 2011 to turn Papua’s Merauke district into the “future breadbasket of Indonesia.”

That project, pitched by the government as the answer to Indonesia’s food security needs, has since become a “textbook land grab,” activists say.

Within just three years of the project’s launch, the majority of concessions granted by the government to companies were for crops to be exported, such as oil palm and pulpwood, belying the claim that the estate would boost domestic supplies of food crops.

This time, however, the government isn’t looking to replicate the same failed model as MIFEE, according to Yacob. He said the food estate program will be managed locally by Indigenous communities.

“So if the Indigenous peoples say they don’t want to plant this [particular crop], we won’t [force them to do so],” Yacob said.

While the government considers future uses for the revoked land, it’s also bracing for the former concession holders to push back, including through litigation.

Cliff Agus Japsenang, the secretary of the district government of Sorong, said one of the four companies whose license in the district had been revoked had lodged a formal complaint with the government.

Yacob said the government would respond to all complaints received.

“What’s clear is that there have been steps that we’ve taken from the beginning, such as checking the maps,” he said.

A similar initiative is also being undertaken in Papua province. Benidiktus said the West Papua government has submitted the result of its license review to the Papua government as a case study.

“I’ve told the head of the plantation agency in Papua that this [review] can be replicated [there],” he said. “But there’s an obstacle. The internet is currently down over there. So maybe my report hasn’t been read yet.”