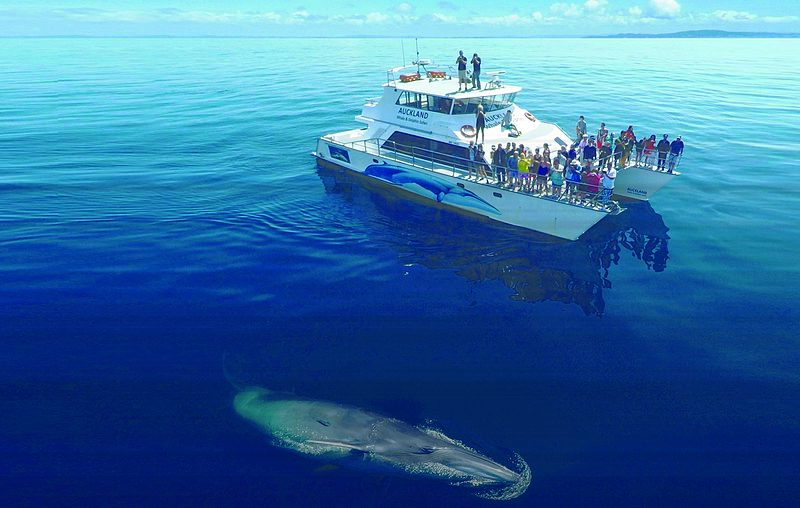 Researchers first reported a Bryde’s whale (pronounced “broo-dus,” Balaenoptera edeni) in the Gulf of Mexico in 1965 and began tracking a small group of the animals in earnest in 1997. Survey data eventually showed the group lived year-round in the Gulf of Mexico, keeping to a small area along the continental shelf near Florida’s panhandle. Noting the differences from either of the two recognized subspecies of Bryde’s whale, which live in the Pacific, Indian and Atlantic oceans, they suspected the whales in the Gulf might belong to a unique species all their own.

In 2014, researchers with the U.S. National Oceanic and Atmospheric Administration (NOAA) published the results of a DNA analysis showing that the whales in the Gulf were genetically distinct enough to at least be designated as the third subspecies of Bryde’s whale, if not their own species.

“That is when we got really intrigued by how different they look genetically,” said lead author Patricia Rosel, a research geneticist at NOAA’s Southeast Fisheries Science Center in Lafayette, Louisiana. “But we didn’t have a full skeleton to look at. We didn’t have a skull that we could use and examine and compare to the skulls of the other closely related Bryde’s whales.”

In January 2019, a dead whale washed up on a beach in the Florida Everglades. John Ososky, a museum specialist at the Smithsonian National Museum of Natural History in Washington, D.C., had been waiting for an opportunity like this. When the local stranding response team identified it as a Gulf of Mexico Bryde’s whale, Ososky knew there was a chance it could serve as a holotype — a specimen upon which scientists base the naming and description of a new species.

Ososky became “frantic about saving it,” he said. But the logistical hurdles of moving a stinking, nearly 30-ton whale carcass were overwhelming.

NOAA arranged to temporarily bury the carcass at a nearby beach. By the time Ososky and other staff and volunteers from the Smithsonian and NOAA exhumed the body four months later, it was slime and bones. The stench was horrendous. They loaded it onto a trailer and Ososky towed it 1,255 kilometers (780 miles) northeast to Bonehenge Whale Center in Beaufort, North Carolina.

Bonehenge’s director, Keith Rittmaster, is known for his quirky “marine mammal graveyard,” where he buries marine mammal bodies, leaves them for several years, then exhumes the clean bones. But Ososky didn’t want to wait years. So Rittmaster composted the body in a temperature-controlled pile of wheat straw, wood chips and horse manure. The process took six months. Now the skeleton is one of 700,000 mammal skeletons in Ososky’s care at the Smithsonian’s stadium-size warehouse in Suitland, Maryland.

What Makes a Species?

There’s been a recent flurry of reported sightings of new or rare whale species, including the conservation NGO Sea Shepherd’s December announcement of a new beaked whale and an unusual sighting of another species of beaked whale in the South China Sea. But neither team in those cases collected a specimen.

Scientists on the Sea Shepherd mission expect genetic samples will prove that the beaked whale they spotted is a new species, but many experts say DNA isn’t enough. To convince the scientific community to classify their find as a new species may require descriptions of the physical features and skeleton.

“When you describe a species, you really want to have multiple independent lines of evidence,” Rosel said. “There are times when genetics might suggest two things are really different. But you could still have populations still mixing, so you wouldn’t call them two different species.”

At first glance, the Bryde’s whale and the population from the Gulf of Mexico are nearly indistinguishable. Both are massive filter-feeders that can reach 17 meters (55 feet) long and weigh 30 tons. And both have three lateral ridges on their rostrum, a distinguishing feature of all Bryde’s whales.

But when Rosel’s team looked at the internal skull morphology, the differences between the whales became apparent. The shape and orientation of bones near the blowhole are diagnostic of the Bryde’s whale subspecies and related species like Omura’s whale (B. omurai). It was the difference in these bones, plus genetic differences, that the team used to determine the whales had distinct evolutionary lineages.

Patience paid off for Rosel’s team. They named the new species Rice’s whale (B. ricei) after the late whale biologist Dale Rice and published their work in Marine Mammal Science in January.

“You have these two things pulling scientists in two directions,” said Jonathan Geisler, an evolutionary biologist specializing in cetaceans at New York Institute of Technology in Long Island. “One, if there is a new species, they want to name it, make sure we do the right things to protect it and maintain its numbers. On the other hand, they don’t want to jump the gun and be wrong.

“This paper really chose a conservative, but I think the right way of being cautious and approaching this slowly and really building the case and the data,” said Geisler, who was not involved in the study.

The Rice’s Whale is in Deep Trouble

The Bryde’s whale was listed under the U.S. Endangered Species Act in 2019. The Rice’s whale maintains the same protections even though it now goes by a new name.

The population is tiny: the act lists it as fewer than 100 individuals, but a 2009 survey suggested only 33 remained alive at the time. While much about the Rice’s whale remains a mystery (like what they’re eating when they dive deep), it is clear that ocean trash, oil and gas exploration, and ship strikes pose significant threats.

“Whales are a big, important species in the ocean. They are a canary in the coal mine. If they’re in trouble it’s telling you a lot about the problems with the ocean,” Ososky said. A piece of plastic had torn the beached whale’s digestive tract, he said, and it had two healed-up broken ribs — likely signs of a ship collision.

Ship traffic is dense in the Gulf of Mexico. And 17% of crude oil production in the U.S. occurs in that region. Last year federal regulators expanded the use of seismic surveys for oil there. These loud underwater blasts can interfere with whales’ ability to communicate and find food.

With the naming of the new species, the Rice’s whale will gain additional protections under the Marine Mammal Protection Act.

“It’s important to me that the evidence is there so that we can concentrate conservation efforts and try and make sure that we don’t lose another marine mammal species in the world,” Rosel said.

This article was originally published on Mongabay, written by Teresa L. Carey, and is republished here as part of an editorial partnership with Earth.Org.