What are Natural Resources?

Natural resources are known to be integral commodities within society and economy. This article details what they are, the examples in which they are used by civilisation, how and why they are important,  and the state of the industry as a result of the COVID-19 pandemic.

What Are Natural Resources?

Natural resources are used all over the world and are significant commodities in their intrinsic forms; including the processes in which they are extracted and purified where they can be used for economic production or consumption Natural resources are either renewable, meaning that once they are replenished, there will be more supply accessible in time; or they are non-renewable, meaning that once they run out, there will  no longer be any accessible supply to be extracted from.

What Are Examples of Natural Resources?

Fossil fuels consist of decomposing plants and organisms within varying layers of sediment, which take millennia to  become the ‘carbon-rich deposits’ we know as fossil fuels

Why Are They Important?

They are also particularly important in everyday life in three areas: food and drink; mobility; housing and infrastructure. Natural agricultural products such as food are vital as well as the resources needed to make food packaging such as plastic and eating implements. Natural resources are also utilised to make vehicles for people to travel in as well as the fuel needed for them to work. The construction of houses, roads, stop signs and the heat and electricity within this housing cannot be done without natural resources.

There is also a degree of economic importance tied to natural resources. A study reported that economic significance based on natural resources relies on two variables. The first variable is the existing and potential flows of income which is characterised by the ability to make and spend money by producing and consuming natural resources like oil. The second is employment and the opening of new jobs which therefore provides families with income.

Fossil fuels, however, have become detrimental to the planet as when they are burned, carbon dioxide and other greenhouse gases are emitted, trapping heat within the atmosphere. Consequently, they play a crucial role in global warming and climate change as carbon dioxide released from burning coal alone makes up 44% of global rates, thus making it the largest cause of temperature rise .

Renewable resources are therefore vital as they generate what is known as clean energy, which means less carbon dioxide emissions and as a result, decreases the need for fossil fuels .

The State of Natural Resources Amidst the COVID-19 Pandemic

The COVID-19 pandemic has impacted the world and has changed every aspect of everyday life, businesses, and industries. The industry made up of natural resource supply and demand is not an exception. Due to nationwide lockdowns in various countries, global rates of trade, travel, and spending have lowered drastically, resulting in less economic activity. Because of lockdown requirements and people staying at and working from home, the demand for oil has decreased and as a result the oil market has plummeted, and producers around the world are suffering .

The International Energy Agency (IEA) assessed in April 2020 that the global oil demand dropped by 30% compared to a year ago, reaching a level not seen since 1995.

A 2020 study claimed this fall in demand is estimated to impact oil-exporting developing countries harder as their one commodity focused market makes them more susceptible should the market crashes. The biggest countries dependent on one commodity are located within sub-Saharan Africa. Oil and gas constitute over 60% shares of merchandise exports in the developing countries of Islamic Republic of Iran, Iraq, Algeria, Libya, and Timor-Leste. Due to this rapid pause in demand for oil, Iraq had its gravest revenue in 10 years and consequently, reversed two years of steady growth and placed severe pressure on government finances.

The IEA also estimated that oil producing and exporting countries like Iraq, Angola, and Nigeria would  likely see  a  drop in their net  income for 2020 of 50%-85% compared with 2019.

However, there may be a light at the end of the tunnel. With the drop in demand for fossil fuels, the market for renewable resources such as wind and solar has grown. The USA’s usage alone went up 40% in under 10 weeks and India’s increased by 45% after the initial COVID-19 lockdown in 2020. The pandemic and lockdown restrictions resulted in a reduction of electricity demands by 15-30% in several countries (see figure below) . 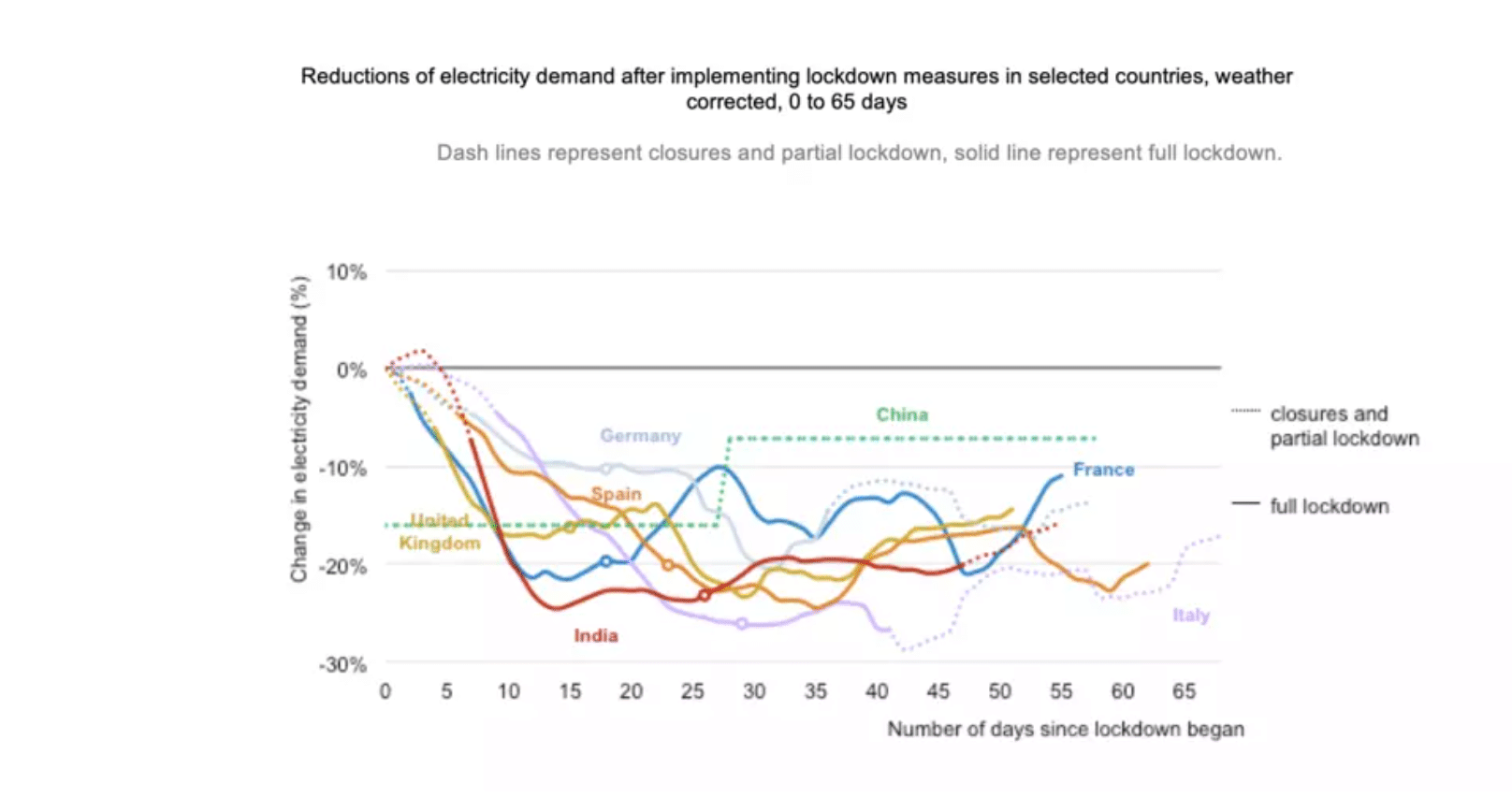 Overall, natural resources are vital to humanity and day-to-day life, but we must remain vigilant of its replenishing usage and its consequences on the already vulnerable world. Needless to say, a shift towards renewable resources continues to be of  importance due to the consequence of being able to reduce the level of carbon dioxide and greenhouse gases being emitted into the atmosphere.