Rising temperatures, drought conditions, and dry vegetation are all contributing causes of wildfires in California, but the worsening impact of climate change is further exacerbating and prolonging the fire season in the state. The latest major event in the state was a massive wildfire that broke out in Yosemite National Park, home to some of the longest-living and tallest sequoia trees in the world.

In 2020, the US state of California experienced its worst wildfire season on record, in which the Bay Area fire became one of the largest wildfires in American history. By the end of the year, the state recorded up to nearly 10,000 blazes that burned down over 4 million acres of land, accounting for more than 4% of the state’s total land area.

California is known for its wildfire seasons, which usually take place between late summer and early autumn, but they’re getting increasingly more intense, destructive and longer in the past two decades. At least a third of some of the worst wildfires in US history occurred in California. But what causes California so susceptible to wildfires in the first place and what is causing the exacerbation of it?

Wildfires can occur naturally and as a result of human activity, but three elements must be present for a wildfire to start:

Natural wildfires, which are classified as natural disasters by the Environmental Protection Agency, can start during low precipitation, dry weather and droughts. During these conditions, dry vegetation becomes the perfect fuel for wildfires and when lightning strikes, it ignites a fire that can spread rapidly with the aid of strong winds and elevated temperatures.

The smallest decline in vegetation dryness can increase wildfire hazard significantly. About 65% of California’s vegetation was drier in the first half of June 2021 than it did during the same period a year ago, creating the perfect condition for wildfires to thrive.

However, dry vegetation is not the sole reason behind California wildfires. Regional winds and currents play a significant role too. Diablo winds, a dry current that flows from the east or northeast and down into the San Francisco Bay area, is often linked as a contributing factor that helps prolong the fire season.

During spring and fall seasons, Diablo winds reach the San Francisco Bay Area and down the western slopes of the Sierra Nevada Mountain Range into the Great Central Valley from the northern coast ranges. As these winds blow from the desert regions of Nevada down to sea level, they warm – nearly as much as 20C – by compressional heating and lose much of its humidity, triggering and spreading wildfires.

Other studies have also shown periodic variations caused by El Niño–Southern Oscillation (ENSO) influence the climate and rainfall over California, making the state primed for wildfires.

Ultimately however, 85-90% of wildfires are caused by human activities and negligence, providing the heat source it needed to ignite. One of the most famous examples is the El Dorado Fire in 2020, where a forest fire that eventually burned down 13,715 acres of land began due to a malfunctioning smoke-generating pyrotechnical device at a gender reveal party.

What is Exacerbating and Prolonging California Wildfires?

California has been experiencing warmer temperatures and drier seasons, bringing on longer and more intense drought seasons as a result of the changing climate. The conditions that are needed to spark a wildfire are more easily met, thereby also increasing its severity once it starts. This is evident by the fact that more than half of the 20 largest fires in California history all took place in the last four years.

Scientists project an average 1C temperature increase every year would increase the median burned area by as much as 600% in some types of forests, while other modelling suggests that land burned by wildfire could increase by 30% by 2060 compared to 2011 levels. 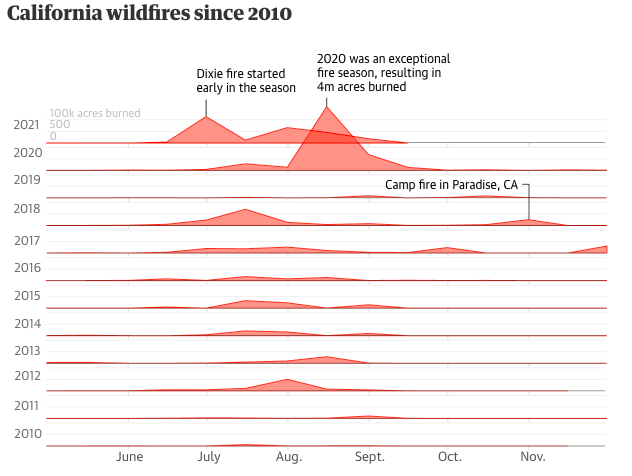 Image: The chart shows the cumulative acreage of fires calculated in bi-weekly intervals, based on their reported start dates. Some larger fires spanned several months in duration. Source: the Guardian; historical data for 2020 and earlier was provided by CAL FIRE. 2021 data was provided by the National Interagency Fire Center.

Some experts even believe that the concept of fire season is a thing of the past, as wildfires have begun to stretch into six to eight months of the year, as seen with the 2021 Dixie Fire starting much earlier in June.

About 10-15% of wildfires occur naturally, and while they cannot be prevented, it is possible to reduce the severity and spread of these wildfires.

To establish healthy and resilient forests and communities that can adapt themselves to these fires, the California Wildfire and Forest Management Task Force was created with a comprehensive plan to expedite efforts to reduce wildfire risk for vulnerable communities, improve the health of forests and wildlands, and accelerate action to combat climate change. This would include prescribing controlled burning to thin forest overgrowth – which acts as tinder for wildlife – and increase sustainable timber harvest programmes.

While these mitigation measures could lower the intensity of California wildfires, researchers suggest it might soon be not enough. “The trends that are driving this increase in fire risk, fire size, fire severity over time are continuing – that’s climate change,” Professor LeRoy Westerling of University of California Merced who studies how the climate crisis affects wildfires warns.