What is A Smart City? 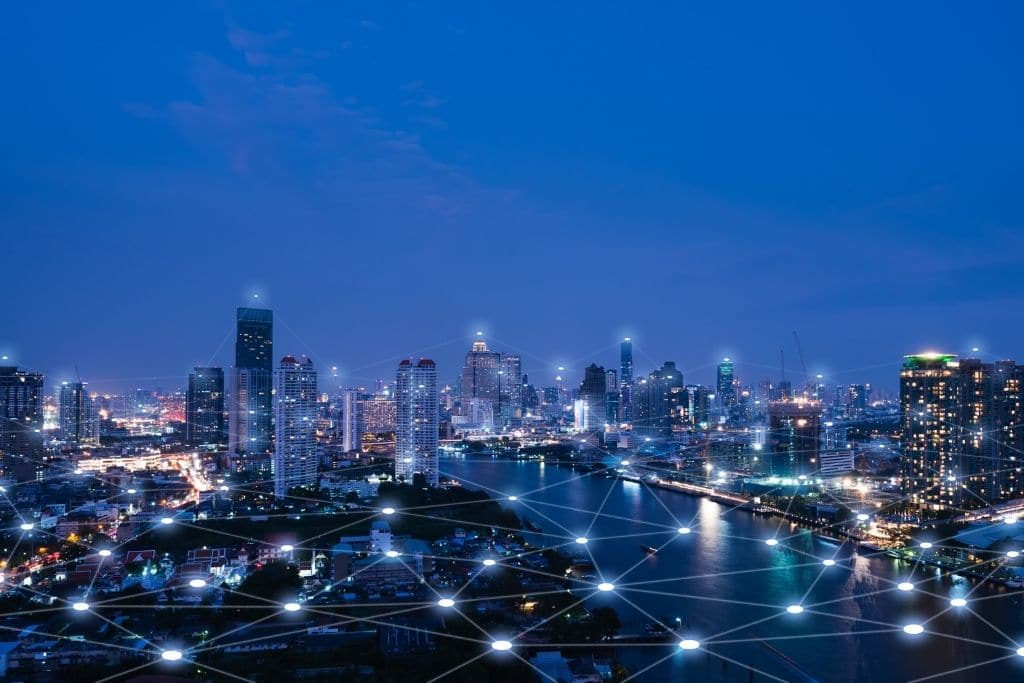 A smart city is a concept that sees the adoption of data-sharing smart technologies including the Internet of Things (IOT) and information communication technologies (ICTs) to improve energy efficiency, minimise greenhouse gas emissions, and improve quality of life of a city’s citizens.

When we talk about smart cities, we may think of concepts like self-driving electric cars, renewable energy, or images of automated technology from films such as The Minority Report and Blade Runner. Yet, smart cities are already among us. So what is a smart city? It is in fact not about being futuristic, but something much more fundamental – information and efficiency.

The United Nations Economic Commission for Europe (UNECE) and the International Telecommunication Union (ITU) jointly made a definition of smart sustainable cities. They defined a smart sustainable city is  an “innovative city that uses information communication technologies (ICTs) and other means to improve quality of life, efficiency of urban operation and services, and competitiveness, while ensuring that it meets the needs of present and future generations with respect to economic, social, environmental as well as cultural aspects.”

We are all familiar with the term information technology (IT), which refers to the use of technological infrastructures for storing, retrieving, and sending information. But most are less so of the term ICTs, which is more than just the collection and transmission of information, but also includes the sharing of information between stakeholders through communication with the help of technology.

In other words, a smart city ultimately aims to create a place in which the information is near perfect. Perfect information, which is often seen as a non-realistic theory in economics, is believed to greatly improve the quality of life. For example, if all consumers and producers know every information about the market, including the price, the quality, and the carbon footprint of every single product, consumers can better decide what they should buy, and producers must compete on price or quality, which will overall lead to better products in the market.

Smart City and The Environment

Smart city concepts have been increasingly adopted as a way for cities and urban environments to reduce their carbon footprint, energy consumption, and pollution. So for a city to be more environmentally-friendly, we must, first, collect data about the environment. For example, having sensors measuring air quality around a city can provide information that we need to identify the causes and consequences of air pollution. Then, the next step is to analyse the data in order to come up with practical solutions and evaluate the action plans.

In the past, evaluating the effects of a solution can be costly and time-consuming. If the result is not satisfactory, you will need to modify the solution and go through the same process until it can meet the requirements. However, with the emergence of big data, things become much simpler since evaluation can be made through simulation, which can greatly reduce the use of resources and time. For instance, relying on geographic data can be far more straightforward to decide the most suitable and efficient renewable energy for a city and to find the best spot to run it.

Data associated with the environment is not limited to objects, but also applies to humans. City planning can be much more efficient if data on civic behaviours is retrieved and examined. For instance, transportation companies can modify their schedules, such as routes and the number of shifts based on the needs of citizens. Having such data, we can efficiently allocate resources and prevent significant amounts of waste. It is estimated that each person will generate 10-15% fewer greenhouse gas emissions, 30-130 fewer kilograms of solid waste per year, and consume 25-80 litres less water per day by optimising the use of energy, and tracking the carbon footprint of electricity, water, and waste.

Ultimately, how smart should a city be? This is the question that we must answer eventually.  In the West, where societies are more capitalist and individualistic in nature, the free access and sharing of confidential information related to the privacy of individuals and corporations are in many ways in contradiction to the concept of ICTs that is intrinsic to a smart city.

While most people would unlikely object to deploying sensors to detect and measure air quality, it is another story if it infringes our privacy. Is every citizen and company obliged to be a part of a smart city? Or is it voluntary? What kind of information will go public and what will be kept confidentially? To this day, none of these questions have been addressed adequately despite more places to implement smart cities initiatives around the world.

According to John Gage, computer scientist and former director of the Science Office for Sun Microsystems, Inc., in order to develop a city truly smart and truly free, it needs to be decentralised and replace existing applications with peer-to-peer applications, in which peers are equally privileged and have the access to the same information. Nevertheless, decentralisation is theoretically difficult as it involves national sovereignty. For instance, in recognising the potential threat of Bitcoin, a decentralised digital currency that competes with the US dollar, the United States government made the decision to tax it. The decentralisation of applications created for a smart city is very difficult because city planning is exactly the job of the government. We do not know what data will be revealed or concealed.

Despite the enormous environmental benefits that will be derived from the development of a smart city, questions regarding privacy must also be addressed. For a transparent country, free access to data can improve the quality of life, but for an authoritarian regime, a smart city can be used as a tool to manipulate information and control its citizens.