Where Does the United Nations Environment Programme (UNEP) Fall Short?

In 2022, the United Nations Environment Programme (UNEP) will turn 50. Since its establishment in 1972, UNEP has existed to set agendas and advocates for greater effort in environmental protection. Thanks to the UNEP, a number of international institutions were established, promising international agreements were signed, and most countries now have environmental ministries. Progress was made. Yet, to this day, critical environmental issues remain unresolved. Where does the UNEP fall short? The answers are often complex, but several key limitations have repeatedly been identified as central to the effectiveness of the UNEP.

For a long time, there has been a big gap between environmental scientific research, public awareness and political decisions at the national level. On the international stage, the gaps are even wider. After WWII, international collaborations focused mainly on reconstructing financial systems and maintaining peace and security. There was little room for environmental discussion. It wasn’t until the 1960s when impending environmental catastrophes became apparent – from the smog that suffocated Los Angeles to the devastating radioactive fallout from nuclear weapon testings – that civil societies began to re-examine the interconnections between the environment, the economy and social well-being.

This awakening has galvanised action from local governments as well as international communities. On 5 June 1972, diplomats from 113 countries convened at the United Nations Conference on the Human Environment – the first UN summit on environmentalism – to build a collective response to the environmental crisis. One visible outcome was the creation of UNEP: a lean, flexible, and agile entity designed to serve as the anchor institution for global environmental action. It plays the following roles and functions:

Since its establishment, the  United Nations Environment Programme has chalked up some impressive achievements in international policy formulation and scientific research. It scored a major success in creating a system for environmental monitoring, cross-sectoral scientific assessment, information sharing, and data acquisition. One example is the launch of The Global Environmental Outlook (GEO) – UNEP’s ﬂagship environmental assessment publication.

Today, the GEO has become “one of the two most respected environmental outlook publications currently available.” Cuba, Peru, Costa Rica, Barbados, Gabon, Senegal, Congo, and Cameroon are among the many countries that have adopted GEO methodology to produce and improve their environmental reporting or used GEO to guide policy formation.

Another significant win was mending the hole in Earth’s ozone layer. In 1974, scientists discovered that chlorofluorocarbons (CFCs), a chemical primarily used for home insulation, was eating up the ozone layer at an alarming rate. Faced with this global threat, the UNEP catalysed negotiations in the Vienna Convention in 1987 and its follow-up, the Montreal Protocol in the same year, to phase out the production and use of CFCs. Eventually, the ozone layer was on track to recover to pre-1980s levels, setting a hopeful precedent for further international cooperation in dealing with a global environmental threat.

In the years that followed, the UNEP approached a multitude of environmental challenges in a similar fashion, exercising its convening power to support scientific networks and forge strategic partnerships, including the Multilateral Environmental Agreements (MEAs). These MEAs provide technical support to developing countries in creating environmental laws and guidelines on reporting and project proposal development.

The proliferation of new international institutions and agreements, now over 3,000, is illustrative of UNEP’s particular strength in setting global environmental agenda, but perhaps inevitably, it has also led to fragmentation and the creation of different camps. While many MEAs have been created under the auspices of UNEP, they tend to spin off in their own orbit once launched, with UNEP’s role curtailed to mere supportive functions in subsequent negotiations. Each MEA focuses on a specific area and “a narrow mission that donors find easy to understand,” which creates competition – but not collaboration.

Several factors contribute to the gradual dwarfing of UNEP in the international environmental policy-making process, and the geographical location of UNEP’s headquarters is constantly brought up as one of the contributing factors.

According to the heatmap produced by Yale’s research team, the distribution of key international organisations working on environment-related issues concentrated in Northern America, Europe, and Southeast Asia. Headquartered in Nairobi, the capital city of Kenya, UNEP is geographically removed from its convention secretariats and distant from the centers of political activity. The distance has unavoidably undermined UNEP’s “capacity to coordinate numerous environment-related agencies as well as, most importantly, its ability to attract top-tier policy staff.” 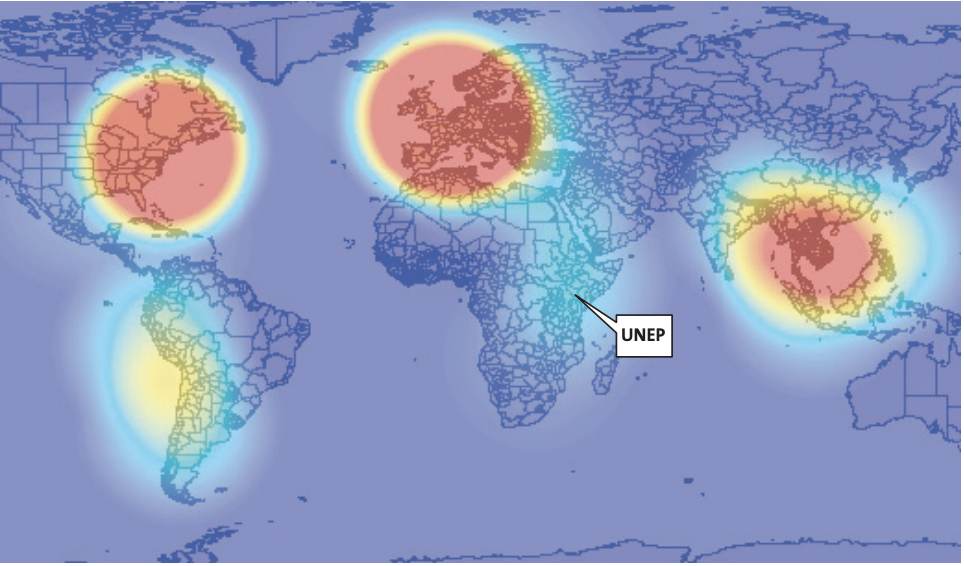 Another limitation points to the institutional design of UNEP. Unlike its counterparts within the UN system, such as the World Health Organisation and the Food and Agricultural Organisation, UNEP was constituted as a programme rather than a specialised agency. The initial idea was to ensure UNEP was given the essential flexibility to navigate the complex nature of environmental issues and effectively marshal and deploy the relevant expertise housed in multiple bodies across the environmental arena.

While the decision was not intended to incapacitate UNEP at the time, this formal status intrinsically places it in a weaker position in the UN’s hierarchy from the onset, severely constraining its authority and capacities in leading coordination activities among the MEA cluster, within the UN system and on the international stage.

UNEP’s failure in establishing itself as an influential anchor institution within the institutional landscape entails further fragmentation of global environmental efforts. New institutions emerged on various levels of governance to fill the leadership vacuum, often eroding UNEP’s responsibilities. For example, the World Bank’s increasing engagement in environmental work overlaps with UNEP’s activities. The establishment of the Global Environmental Facility on the eve of the 1992 Rio Earth Summit also diluted UNEP’s influences. “Dwarfed by [these] newer institutions,” as one senior UNEP ofﬁcial puts it, “UNEP simply does not have a voice in front of the larger UN agencies,” not to mention bringing together disparate efforts into a common response. 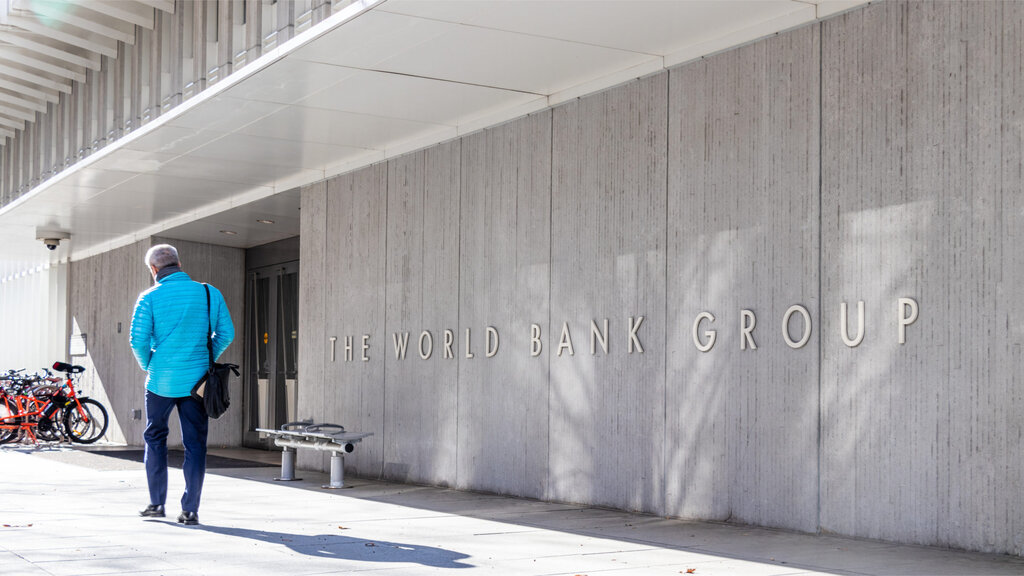 Photo 1: The exterior of The World Bank Group in Washington, DC. Credit: Shutterstock.

What further undermined its performance is UNEP’s relatively unreliable resource flow, predetermined by its financial model and rendered more vulnerable by its perceived lack of influence. UNEP’s core financing, the Environmental Fund, relies purely on voluntary donations from the international community. Over 90% of UNEP’s annual funding comes from a narrow donor base of as few as 15 countries, and the numbers often fluctuate dramatically in accordance with government priorities and attention, as well as their recognition of UNEP’s work.

A case in point: In 2014, Australia cut its funding to the UNEP by more than 80% because it was “not a budget priority for the government.” This slash of funding has drawn a great deal of criticism from different parties, including the Australian Greens party, which lambasted Australia as “a global pariah on the climate front.” In defence of this decision, Greg Hunt, then Minister for the Environment, argues that most Australians would rather put $12m into coral reef protection within our region than donating “$4m for bureaucratic support within the UN system.” The response can be construed to indicate that investments can be, to a large extent, determined by whether or not governments find UNEP helpful in generating results that would satisfy their priorities. 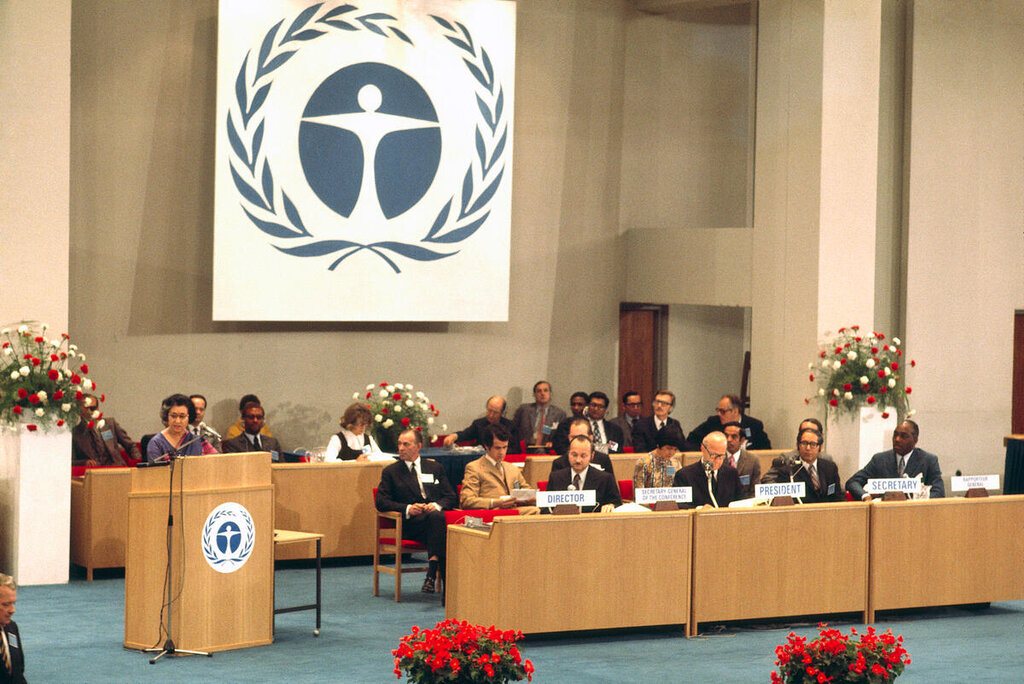 So far, what’s presented above is a variety of contributing factors that have caused many of UNEP’s efforts to fall short of their goals. UNEP’s influence is waning, but this diminishing of importance is not irreversible. At the time when the world is ever more divided, when exacerbated nationalism hinders cooperation, the challenge of international environmental cooperation was not only for UNEP but equally, in fact more so, for the member states. As UNEP embarks on a year of reflection ahead of its anniversary, international communities must seize the opportunity to rethink UNEP’s role, function, and structure.