How Wildlife Bridges are Saving Animals from Electrocution in Costa Rica 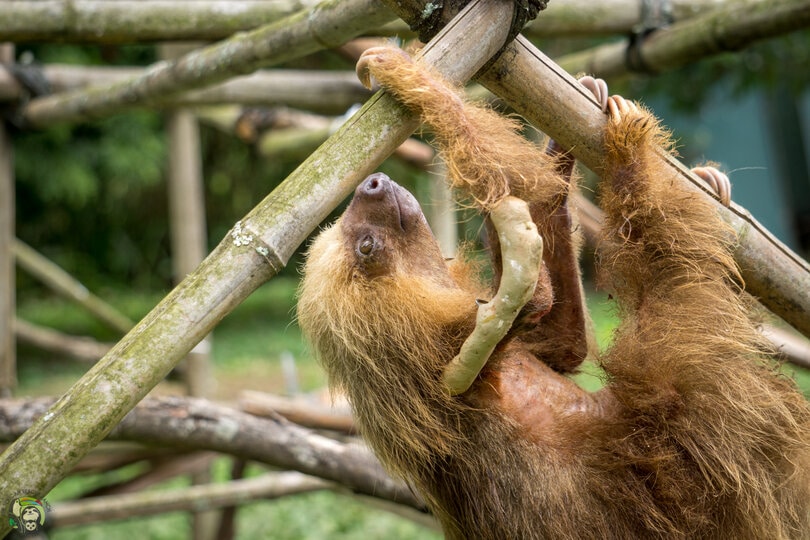 The urban development in Costa Rica and the emergence of power lines running throughout the country’s rich wildlife habitat have endangered the lives of many native animals including monkeys and sloths via electrocution. Conservation group Toucan Rescue Ranch have found ways in working with local companies and communities to create wildlife bridges that allow animals to cross tree canopies and roads safely.

When you think of Costa Rica, it is impossible to not picture the incredible wildlife; the amazing, almost untouched rainforests and beaches, and as a given, an outstanding amount of love to maintain it all for many years to come. And to an extent, this is somewhat true. But there is an underlying issue regarding power lines and wildlife in Costa Rica. One that, sadly, is part of the reality of many rescue centres that work to protect and rehabilitate wildlife, as is our case at Toucan Rescue Ranch.

So, what is the issue with power lines? In a nutshell, the problem between power lines and wildlife boils down to education, resources, lack of planning, and community involvement. But let’s dive in:

The Problem: Development and Habitat Loss

In Costa Rica, lack of planning when it comes to infrastructure and development comes with a price, especially when we talk about power lines. Each year, thousands of animals, including endangered monkeys and families of sloths, are being electrocuted on the un-insulated power lines that have been built into previously untouched habitats across the country. This is by no means just an issue in Costa Rica but is certainly a big hit to its precious environmental weight since Costa Rica is home to 5% of the world’s biodiversity. For this reason, what we do here matters worldwide.

These power lines are also part of habitat loss and fragmentation of habitat since tourism and economic growth have seen a surge over the last decade.  Thus, the electrical power lines installed to feed this expansion use bare aluminium wires to electrocute Costa Rica’s abundant tree-dependent wildlife, such as monkeys, sloths, and other mammals, largely due to lack of alternatives.

How does this happen? As the animals encounter big roads or buildings separating the trees they are used to living in and feeding on, using the power lines as bridges becomes the only alternative when you are at the canopy of the rainforest – but it can be a deadly decision. As canopy-dwelling wildlife  thread their way between wires en-route, their bodies can form a connection between two parallel wires, completing the circuit and causing sizzling electrocution. They face additional risk from high voltage transformers attached to the wires, and this can either lead to very serious injuries, internal organ damage, loss of limbs, or even death. 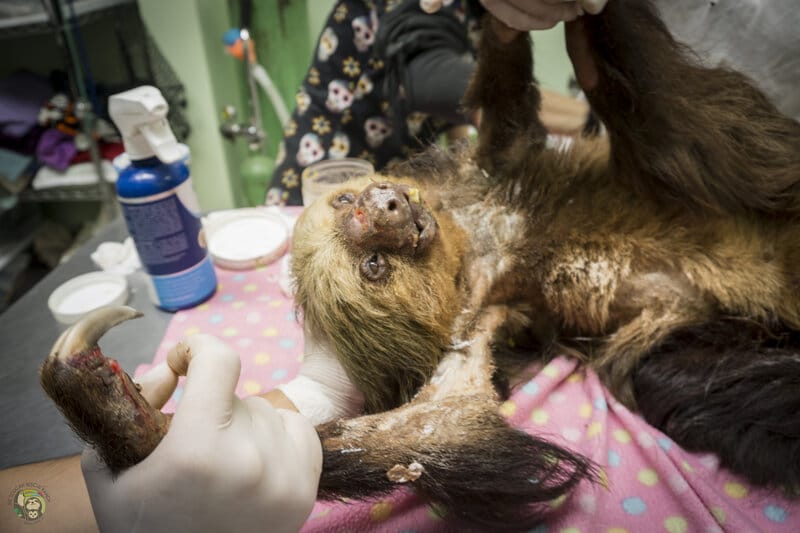 The Ministry of Environment and Energy of Costa Rica, Minae, published a guidance in 2018 on addressing the problem of wildlife electrocutions.

The 61-page directive includes figures on electrocutions and disruptions to electricity services caused by wildlife from five of the country’s eight electricity companies. This showed more than 4,060 animals had been killed in the past five years, with the Costa Rican Electricity Institute (ICE), the state provider, reporting 1,200 deaths in a single year. Additionally, in the Tempisque Conservation Area, where over 70% of the country’s hydropower is generated, 789 monkeys were electrocuted over 5 years. Nonetheless, the report says many casualties remain unreported. And for Toucan Rescue Ranch, these numbers represent their day-to-day labour.

Each year, hundreds of animals, mostly sloths, come through our gates after suffering from an electrocution accident. These cases can go from a really bad burn, loss of limbs, developing internal injuries, loss of eyesight to even death, which can often leave sloths orphaned as a consequence. As you can see, this is an issue that can lead to multiple scenarios medically, and it involves a lot of work from their veterinarian staff in order to save these lives. If we are talking about the rehabilitation of a sloth, it can be anything between a month to a year, depending on the severity of the injuries and the strength of the sloth to manage to relearn a lot of skills. In the process, Toucan Rescue Ranch’s medical staff evaluates whether the animal is a candidate for rewilding or if they need to become a permanent resident of our sanctuary because they otherwise wouldn’t make it on their own in the wild. And even though the success rate is high, preventing these injuries altogether is what Toucan Rescue Ranch strives for as an environmental organisation – to keep these animals where they belong. 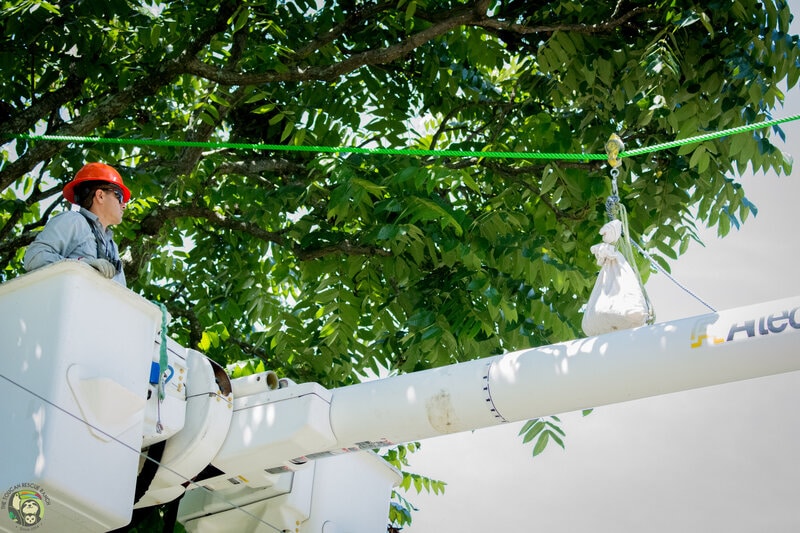 In terms of the problem itself, the primary issue isn’t actually the power lines themselves, but rather how they are built. Insulated power lines allow wildlife to safely climb the dangerous cables; that is until they encounter an uninsulated transformer. For this reason, there are now electricity companies in the country who are championing the change and leading by example, as is the public service company of Heredia, ESPH – in charge of all services of the province of Heredia, including water access, electricity, sanitary sewers and telecommunications – who’s working hand-in-hand with Toucan Rescue Ranch and the wildlife police to make a change.

After many encounters with electrocuted wildlife, ESPH decided to take action and get the community involved in creating wildlife bridges in highly populated wildlife habitats, as well as insulating transformers nearby. This initiative was started by community members being concerned for the well-being of the sloths they saw near their property and decided to contact the electricity company. These bridges consist of rope lines that connect trees from one side of the road to another, ensuring that wildlife around the area can move without using the road or powerlines, creating a safe alternative. For this project, Toucan Rescue Ranch and the Environmental Ministry also got involved to ensure that the bridge was installed properly, taking into account the weight of average sloths, as well as the type of trees they were using. The intent with this is to create a chain reaction with other electricity companies, communities, and wildlife-heavy areas in the central valley, and stop electrocutions.

Wildlife bridges do more than just protect animals from the expanding reach of urbanisation, they protect humans from the dangers of road accidents caused by animals. By educating the nation, communities, and companies alike, we are building a brighter future for wildlife, where we can add biodiversity and conserve the environment as a pillar for the development of this amazing Central American country.

Ready to take action? If you are interested in getting involved with wildlife conservation of the beautiful country of Costa Rica, you can donate to their cause or volunteer in their sanctuary, for an opportunity of a lifetime where you get to be a part of the lives of many animals and give them a second chance.

Watch the video to learn more: 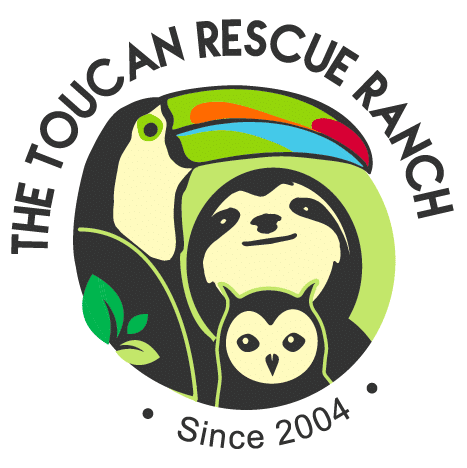 The Toucan Rescue Ranch’s (TRR) mission is to rescue, rehabilitate, and release Costa Rican wildlife. TRR works with a model that focuses on conservation, education, and research to ensure a brighter tomorrow for native wildlife. TRR works closely with the Ministry of Environment and Energy of Costa Rica (MINAE) who rescues wildlife and brings them to our facility. TRR provides sanctuary while giving premier medical treatment, rehabilitation, and eventual release into its natural environment.