World Lemur Day: Facts About the ‘Jewel of Madagascar’ 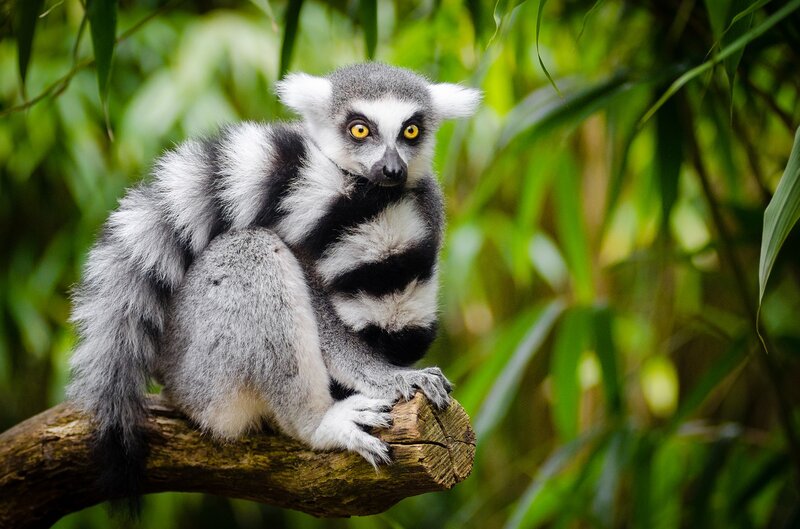 On October 30, we celebrate World Lemur Day to raise awareness about one of the world’s most endangered animals, the “jewel of Madagascar” – lemurs! Here are some facts about lemurs, why they are important and how to help them.

65 millions years ago, the ancestors of lemurs arrived from the African mainland to Madagascar by natural floating raft 65 million years ago. The creatures evolved and adapted to various ecosystems, which have led to a diverse array of lemurs that live in a wide range of habitats. Lemurs such as the Simpona, Propithecus candidus, live only in the high altitude rainforest of northern Madagascar. The Maki and Lemur catta live mainly in the thorny forests of southwestern Madagascar and the Alaotra lake hapalemur lives in the marshes and bamboos of the Alaotra lake.

Lemurs are important in maintaining the balance of Madagascan ecosystems and the growth of plants and trees. They are considered the “creators of the forest,” fuelling the growth of plants in Madagascan forests. As fruit-lovers, they cannot digest fruit seeds; when lemurs travel throughout forests, they spread the seeds through their droppings which act as natural fertilisers. These seeds grow into new trees, which offer shelter and food for a wide variety of animals such as snakes, chameleons and lemurs themselves.

However, lemurs are in danger of becoming extinct with 31% of all lemur species now critically endangered according to the IUCN Red List of Threatened Species. Around 2 000 years ago, the exploitation of nature in Madagascar began as humans arrived. Coal mining, illegal logging and slash-and-burn agriculture have led to deforestation and major habitat loss for lemurs. Since the 1950s, Madagascar has lost 44% of its natural forests and between 2001 and 2019, the country lost 3.89 Mha of forest, which translates to a 23% reduction since 2000, according to Global Forest Watch. The population of lemurs continues to decline as they are hunted for their meat and are illegally kept as pets by individuals and institutions. There are strict laws put in place to protect lemurs and any offenses are punishable by imprisonment of between six months and 20 years.

Lemurs are also affected by the climate crisis. Species are at risk of extinction when they leave their initial natural environment because of climate change. A study published in 2019 found that 95% of lemur habitats could be destroyed by global warming in 2070 as places become too hot to live in. A WWF report also showed that 57 species of lemur populations will decline by 60% if the global temperature increases by 2°C- 4°C by 2100.

What Can We Do for Lemurs on World Lemur Day?

Protecting Lemurs can be hugely beneficial to the Malagasy people. Sustainable ecotourism is considered an effective way to help the survival of endangered animals, including lemurs. Ecotourism not only helps raise awareness for lemurs but also helps the local economy as the industry could bring in millions of dollars each year. It is pertinent that local Malagasy communities view lemurs as valuable assets to their livelihoods. The Madagascan government views ecotourism as a priority and has significantly increased funding to promote the island as an ecotourism destination.

The WWF is also committed to protecting lemurs and the forests by establishing a relationship with local communities that help detect threats such as poaching. They are also supporting communities in the restoration of natural forests and raising awareness for the lemurs.