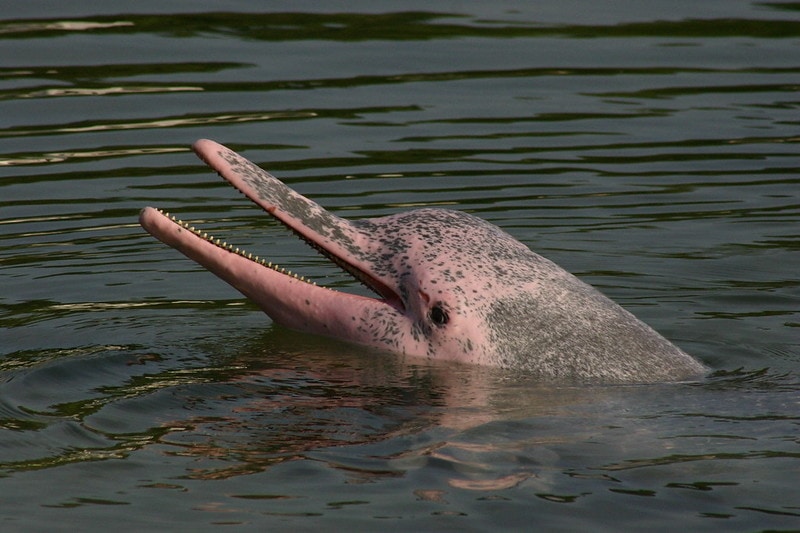 WWF-Hong Kong and its partners have released an ‘emergency action plan’ to save Chinese white dolphins in the Pearl River Delta, in what they say ‘may represent our last chance to save the species’.

According to the group, there are about 2 000 Chinese white dolphins- also called pink dolphins for the hue they acquire as adults- left in the Pearl River Delta and the population looks to be rapidly heading below the minimum number needed to sustain it. Their numbers are declining by around 3% every year; in Hong Kong, the number has dropped by more than 80% in the past 15 years. They warn that action needs to be taken now to preserve the species’ core habitats and prevent its extinction.

The most recent government estimates indicate an average of just 32 Chinese white dolphins left in Hong Kong’s waters, a historic low, down from 188 in 2003.

The largest dolphins measure up to 2.5 metres in length, the young about a metre, and they can weigh as much as 150kg. According to the IUCN Red List, the species are listed as ‘vulnerable’ and populations are decreasing in all its native habitats, from China and Cambodia to Malaysia and Thailand.

Why Are Chinese White Dolphins Endangered?

Coastal developments are encroaching on their feeding and breeding grounds, increased marine traffic strikes or disorients them, and pollution is poisoning them. These developments also make the animals extremely stressed, which affects their socialisation and reproductive habits.

As part of the emergency plan, seven critical threats to the marine mammals are identified: habitat loss and degradation from development and construction, a depletion of the fish they eat from overfishing, illegal fishing and unsustainable fishing practices, underwater noise disturbance from boats, marine vessels that strike the dolphins, toxins and pollutants from industrial run-off, entanglement in sea nets and sea level rise.

The group also proposes that 13 core protected areas be set up, stretching from the waters west of Lantau to Dongping Harbour at the western edge of the delta. They want these areas to be declared as ‘no-take’ and ‘development-free’.

Dr Laurence McCook, WWF-Hong Kong’s head of oceans conservation, says that they’re working closely with partners and authorities in Guangdong to determine how the areas they’ve identified can be cleared of fishing and mooring.

He adds, “The Chinese white dolphin is a unique and shared heritage of Hong Kong, Macau and Guangdong. It would be a global tragedy to lose this iconic creature from the future of the Greater Bay Area. The governments, businesses and people of the delta region should seize this last chance to save our Chinese white dolphins.”

Otherwise, he says, extinction is not a threat, but the most likely outcome.