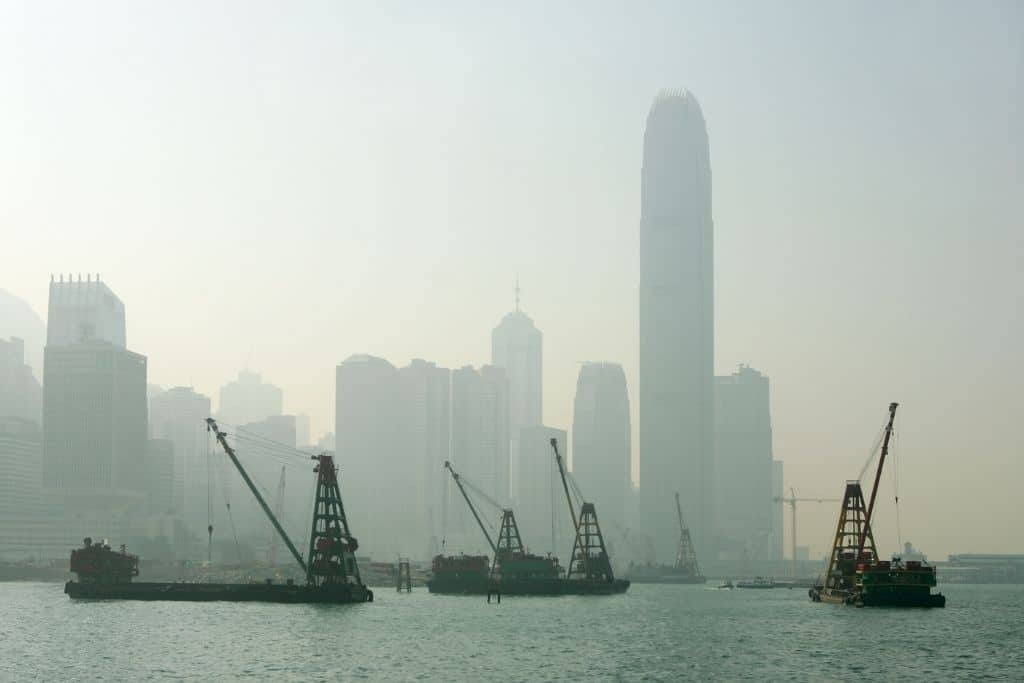 Ocean plastic pollution is no news. Millions of tons of plastic enter our oceans every year and more than 5 trillion pieces are already floating in waterways all over the world. In Hong Kong, the plastic pollution issue is at a crisis point. The city’s beaches and waterways are drowning in plastic, endangering the over 6,000 marine species that populate them. However, Australian-born Angus Harris and his wife Ellen Ogren might have found a way to clean the waterways in Hong Kong, and all it takes is four tiny red boats.

Marine plastic pollution is growing rampant. Of the over 300 million tons of plastic produced in just one year, at least 14 million tons end up in the ocean. This not only endangers marine species, but also compromises the food chain and puts the health of 3 billion people that rely on seafood at risk. Researchers estimate that, on average, every person ingests 50,000 pieces of microplastics.

In Hong Kong, the situation is worrisome. The city’s sea is being swamped by plastic pollution and microplastic levels are 40% higher than the global average, with more than 5,000 pieces per square metre. The problem, experts believe, lies in Hong Kong’s unsustainable packaging habits, the lack of adequate plastic recycling facilities, and scarce public opinion’s awareness of the urgency of the climate crisis. In a city where more than 5 million plastic bottles are thrown away every day and a staggering 46 million single-use plastics are disposed  of weekly, it is no surprise that Hong Kong’s waterways are so polluted. However, not enough people understand the huge threat of heavily polluted waterways to human health and to the health of our planet.

Established in 2019 by retired sailors Angus Harris and his wife Ellen Ogren, the non-profit Clean Waterways Initiative has massively improved the situation of Hong Kong’s waterways, significantly decreasing the pollution levels in the city’s trash hotspots of Aberdeen and Victoria Harbour. The original idea of the couple and the partnership with HSBC allowed the programme to collect more than 76,000 plastic bottles, 28,000 aluminium cans, and a total of 43 tonnes of landfill waste in less than two years.

The work is entirely done by four small solar-powered boats that can “efficiently collect, sort and unload trash” from Hong Kong’s waterways without generating emission output. By using electric engines, the Initiative was able to cut 16 tonnes of CO2 emissions per boat annually. The four vessels – Solar Explorer, Aqua Explorer, Harbour Explorer, and Wayfoong Explorer – operate 7 days a week and 24 hours a day in Hong Kong’s Victoria and Aberdeen Harbours to collect litter before it makes its way to the open sea. They have been designed to be able to move easily in the traffic of the port and collect all sorts of trash, from bulky to tiny items, and up to 2,500 litres of floating plastic per load. In addition, the on-board sorting deck allows for the sorting of collected waste for recycling and landfill.

Besides fighting plastic pollution and protecting over 6,000 local marine species, the Initiative aims at educating public opinion and raising awareness among the local community and younger generations about the trash disposal and the dangers of plastic pollution. They do this by partnering up with other non-profit organisations and schools to host educational tours, workshops, and talks to spread knowledge around the 4 R’s: Reduce, Rethink, Reuse and Recycle. Educational activities like these are, according to Ogren, a “fundamental part of tackling plastic pollution as an issue”.

Martina is an environmental journalist based in Hong Kong. She holds two Bachelor's degrees in Journalism and Translation/Interpreting Studies and a Master's degree in International Development. Passionate about writing and languages, her interests include sustainability and the role of public policy in environmental protection, especially in developing countries. She has extensive experience working as a journalist and in 2020, she joined the outreach team of the United Nations Global Communication Department. She currently works for Earth.Org and is the website's main writer and editor.