10 Plastic Pollution in the Ocean Facts You Need to Know 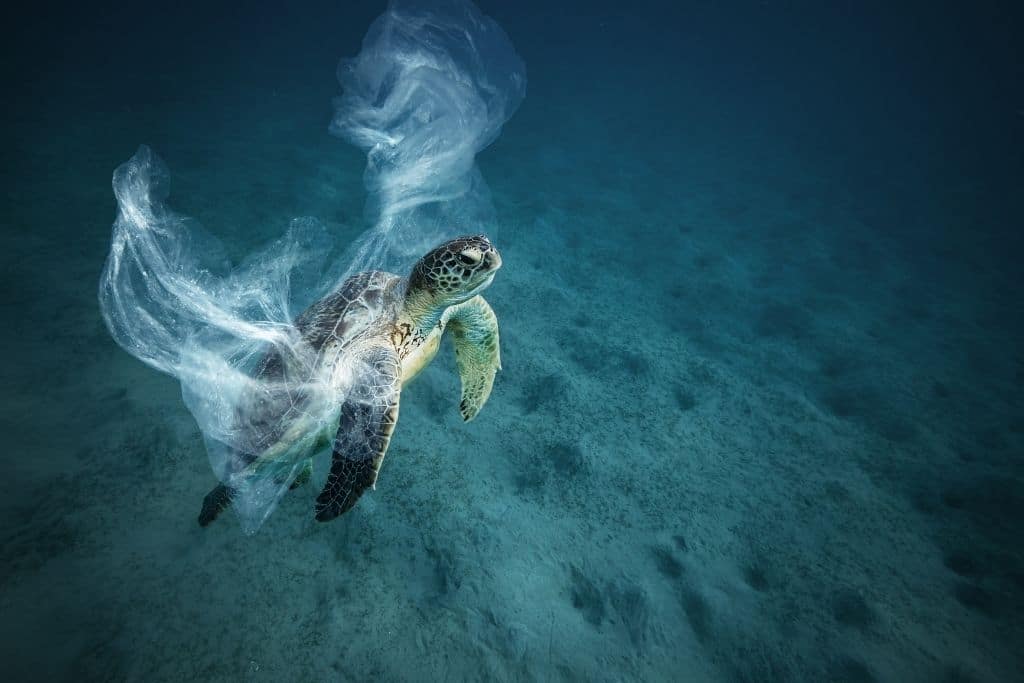 June 8 marks World Oceans Day. On this occasion, we are reminded of the major role of oceans in everyday life and we reflect on the devastating impact that human actions have on them. One of the biggest environmental problems of our lifetime is plastic pollution. This cheap, versatile, and extremely durable material has become an essential part of our daily lives. However, our reliance on it has created a global environmental crisis, harming our oceans and all life that lives in them. Here are 10 plastic pollution in the ocean facts you should know about.

1. More Than 8 million Tonnes of Plastic Enter the Oceans Every Year

When plastic production started in the 1950s, only a small amount of plastics were produced, and resulting plastic waste was relatively manageable at the time. Nowadays, however, we generate approximately 300 million tonnes of plastic waste each year, 60% of which ends up in our natural environment or landfills. Plastic pollution is currently one of the biggest problems affecting the marine environment with an estimated 8 million tonnes of plastic entering the ocean annually. Roughly 40% of the ocean’s surface is now covered in plastic debris and if our plastic consumption continues, it is estimated that by 2050, there will be more plastic than fish in the ocean.

Plastic debris floating in the water can look a lot like food to animals. When an animal ingests plastic, it fills up their stomach and reduces the feeling of hunger, which prevents them from eating and dying from starvation. While plastics are already harmful as it’s made with toxic chemicals, free-floating pollutants in sea water can also accumulate on the surface, making it an extra deadly meal for marine wildlife. When marine organisms ingest plastic, these contaminants enter their digestive systems and accumulate in the food web over time. It is impossible to say how many animals die from ingesting plastic each year as not all dead animals are found and not all are examined, but the number of reported animals dying from ingesting plastic continues to climb steadily with each passing year.

And these are just the animals we find. There are constant reports of marine animals entangled in fishing litter. Between 500,000 and one million tons of ghost fishing equipment – fishing gear that are lost, abandoned or discarded left by fishermen – enters the ocean each year, either dumped from fishing boats or washed away from ships and shorelines. As it floats through the water, it traps any marine creature that swims in its way, which can restrict the animals’ movement and make it difficult for them to feed or swim. Mammals are particularly susceptible to ghost fishing nets as they struggle to breathe underwater and are killed by drowning. Animals can also suffer physical trauma from entanglement and infections from the plastic cutting into their flesh.

4. 3 Billion People in the World Depend on Fish as A Source of Protein

Ocean health is incredibly important, particularly for developing countries, as billions around the world depend on fish as their main source of food and income. Some coastal communities even rely on fish for 70% of their daily protein intake. Findings of microplastics in seafood are on the rise, threatening our food security and safety. The effects of consuming plastic-contaminated seafood are not yet known but roughly 210 commercially important species are known to have ingested plastic debris.

Plastic takes hundreds of years to break down and is particularly buoyant. This means that floating plastic can circulate for years before eventually reaching new shores. Marine animals, plants and microbes “hitchhike” on these plastic debris and can be deposited hundreds of miles from their native ranges, which increases chances of non-native species introductions. This is known as ‘ocean rafting’. Invasive species can be extremely disruptive for ecosystems as they are capable of out-competing native organisms for limited resources, introducing pathogens, altering habitats and consequently reducing biodiversity.

Example of coral bleaching as a result of rising ocean temperatures and acidification.

As plastics are made from fossil fuels, when it breaks down, it releases greenhouse gasses back into the atmosphere. The breakdown of plastic in the ocean is mainly due to environmental factors such as the exposure of waves, sunlight and heat. As our climate changes and the planet gets hotter, more greenhouse gasses are released from plastics, subsequently increasing the rate of climate change and thus perpetuating the cycle. A hotter climate and rising greenhouse gasses in the atmosphere means the ocean is becoming more acidic and heating up, which has severe consequences on marine ecosystems, particularly for coral reefs. Coral reefs are vital habitats in the fight against climate change as they sequester so much carbon but if the global temperature rises more than by 2C from pre-industrial levels, more than 99% of the world’s coral reefs will disappear.

7. Plastic Breaks Down into Microplastics

The thing about plastic is that it never truly goes away, it just breaks down into smaller and smaller pieces called microplastics. This means that every plastic we have ever used still exists in some form or another somewhere around the world. Plastics were designed to be strong and durable, so it’s not surprising it is one of the most persistent pollutants on Earth. Something as small as a plastic bottle can take more than 400 years to break down.

8. 50% of Plastics Produced are Designed to be Single-Use

It’s incredibly difficult to avoid plastics in the modern age. The majority of goods we consume are either made from plastic or come in plastic packaging, half of which are designed to be single-use only. It’s near impossible to find plastic-free alternatives. While companies and organisations need to do better and make it easier for us as consumers to reduce plastic waste, there are a few switches individuals can do to cut down day-to-day usage such as investing in reusables like water bottles, tote bags and coffee cups.

9. Ocean Plastic Pollution Is On Track to Triple By 2060

One of the most shocking plastic pollution in the ocean facts is that that ocean plastic pollution is on track to triple over the next 40 years and waste to exceed one billion tonnes, according to the Organisation for Economic Co-operation and Development (OECD). This could add up to 110 pounds of plastic trash for every meter of coastline worldwide, amounting up to 29 million metric tons of plastic waste per year by 2040. But experts say that the volume could be slashed significantly if we reduce the growth of virgin plastic production, improve waste collection systems across the globe, and invest in the creation of plastic materials that are easier to recycle.

The ocean is our biggest ally in the fight against climate change, as they can absorb and store nearly 30% of global carbon emissions. It is crucial we ensure it stays healthy. Governments are starting to wake up to the plastic crisis and an impressive number have already taken action against plastic pollution. Following their ban on plastic bags in 2019, New Zealand has now pledged to phase out single-use plastics including straws, cutlery and cotton buds, PVC and polystyrene drink and food packaging by 2025.  India has also promised to ban the manufacturing and use of single-use plastics from July 2022.